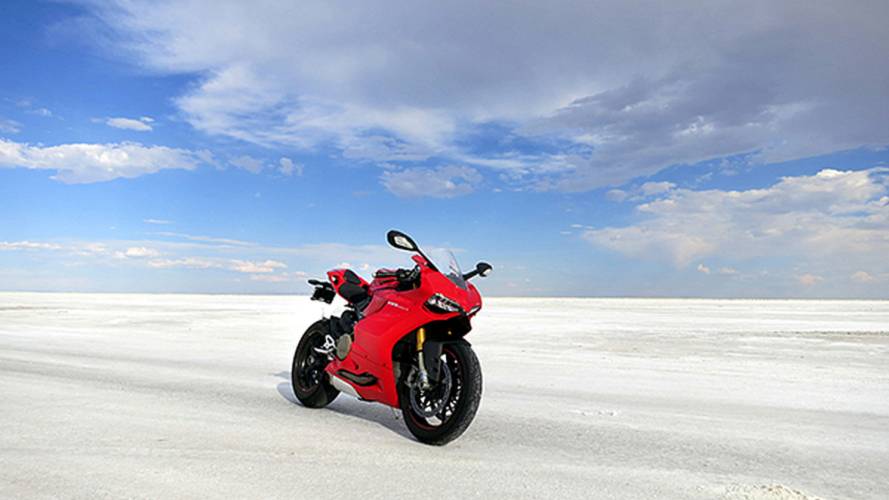 A coast-to-coast review of the Ducati 1199 Panigale S

Who's most qualified to review the Ducati 1199 Panigale S? A racer? A journalist? How about the guy who departed on a 15,000-mile, seven-month, coast-to-coast (and back) road trip the day he bought one? Over to you, Dennis. — Ed.

I’d always dreamed of going on a long motorcycle trip without an end-date. Looking back I see I had more than a few opportunities to make it happen, but prudence and responsibility always interfered: college, work, a mortgage, the cable guy coming on the 16th. But everyone eventually hits a moment in their life when the reckless ambitions of their youth begin to turn into adulthood regrets. And when that moment finally came for me, I said, “fuck it”, bought a 2012 Ducati 1199 Panigale S, threw some gear into a backpack, hit the starter button and roared out of Los Angeles. My only plan was to get to the Atlantic prior to turning around.

I did 1,036 miles in one day on the Panigale, so it can’t be that bad of a touring bike now, can it? That sentiment of ‘why that bike?’ was expressed quite a bit during my trip, though, and a lot of people I met in gas stations or on the side of the road didn’t believe how far I’d come on it until they saw my license plate. I think the issue wasn’t with my choice to ride the bike I love — it’s that our lives have become so comfortable and cozy that what we consider challenges today probably wouldn’t even classify as inconveniences a generation or two ago. Show up for a ride with Steve McQueen in 1972 complaining about the switch for your heated grips only having three settings and you’re going to catch a boot to the hairy gumballs. Our ability to adapt is greatly underestimated, which is why I think so many people end up choosing what seems to make sense instead of the going with bike they lust after. I knew the Panigale would test me, but that was part of the allure. Coping with demanding situations and overcoming adversity produces a tremendous feeling of private, personal power that luxury and security can never provide—isn’t this, the internal satisfaction that comes from doing things our own way (despite the added difficulty), one of the reasons why we ride motorcycles?

The biggest challenge of the trip was to walk out the door, get on the bike, and ride. Physically it might have been the easiest part of the trip, but mentally it’s the most difficult. It was self-expulsion from a life I liked quite a bit. But you don’t learn much and you don’t grow—and you surely don’t discover new places and people and things—unless you hit the reset button every now and then.

Once on the road it’s perpetual off-balance that probably gets to you the most. The lack of familiarity can be frustrating and stressful, too (being lost, not knowing where I’d be sleeping the following day, running on fumes with no gas station in sight, ending up in sketchy areas of town). But things like a pressing need to find a new home for a few nights can lead down all sorts of roads and paths—often it led me into the lives of some of the most authentic, genuine and interesting people I’ve ever met in my life. “Lifeboat worthy” people, as one of the coolest guys I met on the trip would say. And as you’d expect, I got to see some pretty cool parts of the country. I witnessed fireflies flickering above cornfields while sharing a couple bottles of wine with artists living on a farm in Claypool, Indiana, learned quite a bit about the underworld in more than a few cities, experienced post-apocalyptic Detroit, (which during the day is absolutely stunning, but can be quite terrifying at night) and saw fall colors for the first time. Also got a chance to take the Panigale on several off-road adventures!

The law of diminishing returns might apply to most things in the world, but the experience of piloting a Panigale is never unexciting, uninspiring or dull. The 1,502nd ride is just as thrilling as the 1st. Part of that is a result of the thunderous music the Superquadro twin makes. And part of that is a result of brutal, raging and merciless power the 1199 makes. 192hp and 407lbs results in an experience that was accessible only to those with a World Superbike Racing license just a few years ago.

Durability was stellar. The fact that nothing ever left me stranded or wondering “what’s that clicking noise?” while riding through 35 states was a marvel in tight quality control and durability. All the miles in the gravel and dirt also demonstrates you don’t need a 1200 Adventure and panniers to get where you want to go (TC and ABS help, though!).

One of the most unexpected features of the bike that’s not mentioned in any sales brochures or discussed in any comparo tests is the effect the bike has on the general population. To women it’s a snarling bouquet of roses, kids think it’s some sort of alien technology and hell—even police had a hard time resisting its charm (not one moving violation the entire trip, despite my best attempts). You might meet the nicest people on a Honda, but you meet the most interesting on a Ducati.

A few bodywork bolts rattled themselves free, the neutral sensor needed replacement, the bike had (and still has) some starting problems that requires a bit of the throttle at times (addressed, but not cured with a software update), but mechanically the Panigale was near perfect. In servicing, twice the techs overfilled the oil during a change (once by almost a liter, requiring some roadside siphoning) and during my 15,000 mile service Ducati Newport Beach discovered that the chain had worn through the swingarm protector and dug into the metal. That’s something Ducati should have caught during the several times I brought it in for servicing, new tires and chain adjustments along the way.

Under-seat heat is an ergonomic trouble spot. There were times during my trip that I actually thought my right leg was on fire. But when temps dipped into the 30s and 40s I really appreciated the furnace-like qualities of the motor. Ducati has addressed the situation with a new heat shield (covered under warranty), but my rear pipe is wrapped now, so it’s not much of an issue.

Oh and Ducati needs to fire the guy responsible for designing their super slippery, ‘self-lubricating’ footpegs. $50 Rizomas and ten minutes solved the problem, so it’s rather baffling how something so simple to get right was overlooked.

Would you do it again if you know what you know now?

Absolutely. I’m actually having difficulty stopping myself from doing it again. For six months I lived a very peculiar type of life and the thought of adapting to a ‘normal’ world makes me nervous. I grew accustomed to the unfamiliar, to waking up and having no idea where I was, of being bombarded by new cities, strange roads and new people. Instead of the mundane ‘point-a to point-b’ routine of our normal lives, there was an energy — an anticipatory excitement that might be impossible to achieve in normal life. It’s as if for 180 days there was no yesterday, only a series of today and tomorrows. And despite the stress of travel, there’s a tranquility and peace to constantly being in motion. How does one transition from a state of constant apprehension and ceaseless expectation to a repetitive, monotonous routine? I don’t know. I still don’t know. The day after the trip ‘officially’ ended, I got into my truck and headed back out on the road. So I suppose I am doing it again and I can’t stop thinking about the next trip. Asia? Europe?

While staying at a horse farm in Virginia, I met a tough-as-nails, ex-RAF British gentleman who’d previously owned a huge collection of motorbikes (one of his Vincents is now in Jay Leno’s collection). He was a bit incredulous when I first showed up to his ranch, mentioning how my choice in cross-country bikes could stand some improvement. Having ridden just about every bike made except a Ducati (and still riding bikes in his 70s), I tossed him the key. 30 minutes later he returned with a huge grin on his face, confessing: “That was the most fun I’ve ever had on a motorbike.” After a moment the smile draped away, he looked me directly in the eye and confided, “I will never forget that ride as long as I live.”

Is there a better summary possible?

You can read more about Dennis' adventure on ADVRider and Ducati.ms.