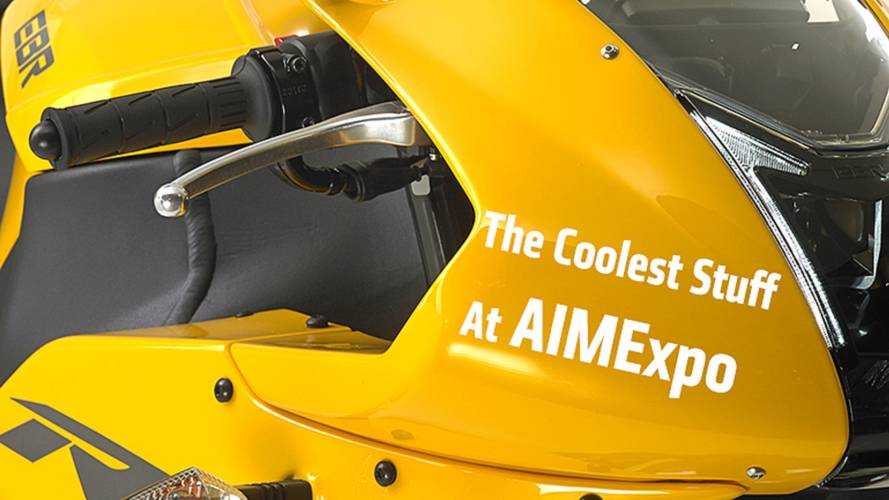 We bring you the best of AIMExpo 2013 straight from the show floor in Orlando, Florida. This is our list of the coolest motorcycles and related products.

America's new bike show wants to bring a genuinely world-class exhibition across the Atlantic. In this, its first year, manufacturer support was scant, but the aftermarket turned out in a big way. Here's our pick of the best of AIMExpo 2013, brought to you straight from the show floor.

Four years ago, Harley sacked Erik and killed Buell. This week, his new company unveiled it's first production bike. We all had high expectations, but this thing surpassed every single one of them. To top it off, the American designed, American made bike will be raced by an American — Geoff May — in World Superbike next year. If they call it Team America, no one will think about puppets.

You know about my Vanson. I wear it every day, everywhere. I've even slept in it a few times. I know that you know because you called them up and asked for an armored version of the Model A — the same as mine — in significant enough numbers to convince one of the most conservative companies in the world to put it into production. It costs $550, will last your whole life and now, keep you safe in a crash.

EBR also announced at the show that, starting next year, it'll be importing and distributing (major EBR investor) Hero Motor Corp bikes in the USA. Look at this little beater and you might scoff, but Hero made 7.1 million motorcycles last year. That's 28 times more than all the street bikes sold in America last year. This is potentially the beginning of something very big.

It might not look like it, but each boot pictured here is capable of keeping your feet and ankles safe in a crash. They don't look like it because they look good. Stylish, high quality and protective? We'll be wearing these as soon as they reach U.S. shores in 2014. Wait till you see their jeans.

Chain drive is the highest performance option, but it requires regular maintenance, making some people opt for heavy, ugly shafts. Enter ScottOiler. By dribbling a tiny amount of oil on your chain periodically, it extends chain life and reduces maintenance. The last time I used one, I was only adjusting my chain when I swapped tires. This thing works.

This "Six Days" model is DOT and ECE certified and weighs just 1,020 grams. It's the lightest helmet I've ever touched. They're coming to America for the first time and you should get excited.

The third generation of the Spot emergency messenger expands battery life and ruggedness while shrinking in size — it's barely bigger than the four AAAs that go in the back. It can automatically tell Facebook, Twitter, an email list or your mom that you're OK, anywhere in the world. And, with the SOS button, call for help anywhere, too. And we do mean anywhere, Spot owns its own network of satellites which provide total global coverage. I'm going to get one and use it to keep you guys informed of our adventures.

Our friends at Twisted Throttle designed this little box to make adding on auxiliary lights, GPS units, heated clothing or any other electrical equipment super easy and hassle free. It's basically a separate fuse box, meaning you won't have to hack all the above stuff into your wiring harness and allowing you to set the equipment up to work on its own or the bike's switch. It might look like a humble black box, but it's a very clever, very useful product.

This thing can hit 45 mph on water or land and takes four seconds to convert from quad to PWC or vice versa. I'm not awesome enough to understand the need for it, but I wish I was.

A full color, Thin Film Transistor display isn't new on a motorcycle — the Panigale uses one. But, unlike any other bike, this one is easy to use. The three buttons actually makes sense, and are all you need to easily and intuitively navigate the menus. No patting your head and rubbing your belly in order to change TC settings.

Heated clothing without the hassle or need for a delicate touch. Venture's heated gloves and jackets are thin, flexible and provide tactile feedback from lighted buttons — red for hot, yellow for medium and green for cool — all in a package that actually looks and works like real motorcycle stuff.

Waterproof bags that are affordable, attach to your bike quickly, easily and securely and can support themselves; no need to fill them fully.

Who would have thought it would take this long for a major helmet maker to incorporate all the convenience, comfort and safety of a modern performance helmet into something that doesn't make you look like Buzz Lightyear? The Bullitt meets the best safety standard in the world — ECE 22.05 — has real ventilation and a multitude of visor shapes and configurations which enable you to totally change the look of the helmet to make it unique to you. I'll be wearing one of these as soon as they're available.

Install Impulse's own indicator bulbs or clip a signal unit onto your bike's wiring (no cutting necessary) and a wireless signal is sent to the jacket, illuminating auxiliary brake or turn signals in time with the bike's own lighting. The idea is to drastically increase your visibility. Great idea, but it'll be better when they release their modular unit, which will clip to any existing jacket, rather than requiring you to wear one of theirs.