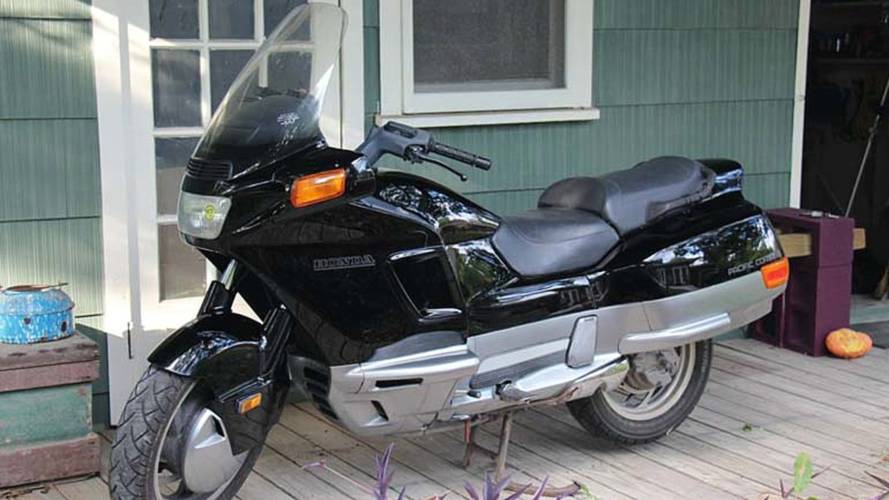 In an effort to sell his Honda PC800 Pacific Coast, an Austinite posted a funny and profane ad on Craigslist.

In the weird and wonderful land of Austin, Texas, there's a man – I won't call him a hero, because what's a hero? – there's a man selling an old Honda on Craigslist. It's not just any Honda, it's one of Team Red's supremely weird PC800 Pacific Coasts, and it's not just any Craigslist ad. In a clear attempt to not only move his pristine PC800 but also to gain some viral bona-fides, our man posted a 1,200-word manifesto that honestly says precious little about the bike but speaks volumes about the owner.

If you don't know, the PC800 Pacific Coast is a fully-faired touring bike that Honda made between 1989 and 1998. Looking like something straight out of a late-80s super vehicle show, the PC800 features full body work that covers all of the bike's mechanicals. For touring, the PC800 has a set of integrated locking hard panniers and a sizeable trunk located beneath the saddle. The whole aft portion of the body swings up like a car's trunk to allow access to the storage, it's kind of nuts.

Hidden beneath all that plastic is a pretty bullet-proof 800cc water-cooled V-twin mated to a five-speed trans with a shaft final drive. It was built specifically for the American market, and was marketed to white-collar professionals as shown in the dreamy, aspirational, feminine hygiene-style television spot shown below. The bike was marginally successful – only 14,000 were sold in North America, Europe, and Japan – but ultimately suffered from being both weird and boring despite being extremely comfortable and competent.

The most excitement any PC800 has ever seen

You're not here for a history lesson, though. You're here to learn more about this amazing bike and the man behind it. Well, sifting through the strange, crass, and often vulgar screed we discover that it's a '92 or '93 model. The owner says he's not sure because he never bothered to learn what year it actually is, which is as much an indictment of the bike as it is of the owner. It has just shy of 20,000 miles – which is hardly broken in – all new fluids, filters, tires, and brakes at 16,000 miles, LED headlights, and a slew of other mods and little quality of life fixes. That's about all the owner has to say about the bike, other than that it's black and he wants three grand for it. The rest of the ad though. Whew, lad. It's kind of a work of art.

You guys have seen ads like this before, right? They're super long and silly to get attention and they make the rounds on car- and bike-related Facebook groups pretty regularly. More than just the usual, poorly spelled, NO LOWBALLERS I NO WAT I GOT Craigslist gibberish, these long-form ads are typically some mix of crazy screed and short story with a ton of superlatives and hyperbole thrown in for flavor. This ad has all of that, with some additional profanity and some shots fired at baby boomers, white guys, and your girlfriend. I'll be honest, it's a little tryhard and not particularly funny in places, but, I mean, it did get my attention enough that I'm writing an article about it. So, good job PC800 owner, well played.

All that internal storage and he still has stuff lashed to the pillion. Dude's a heavy packer, I guess

Astute readers may have noticed by now that I didn't post any of the ad's text here. There's a good reason for that! Our man's ad is pretty not-safe-for-work, so I figured I'd let you guys make the call as to whether or not you want to read a 1,200-word dick joke masquerading as a bike ad at the office. For future readers (Hello, future readers! How's the future? Are all bikes electric yet? What wonders can you tell us?), I've archived the text of the ad here, for when it finally disappears from Craigslist.

Honestly, if I was in the market for a new bike and wanted something cushy and mundane, I'd jump on this in a heartbeat. Three grand is a steal for this bike, especially with all the extras – bike cover, manuals, ICON helmet, other bits and bobs – he's throwing in. Despite me talking trash about it here, I've always liked the Pacific Coast for its uniqueness. In a world of sportbikes and Harley clones, the PC800 is content to be itself, and what it is ain't that bad.