6 Dirt Bikes That Changed the Sport 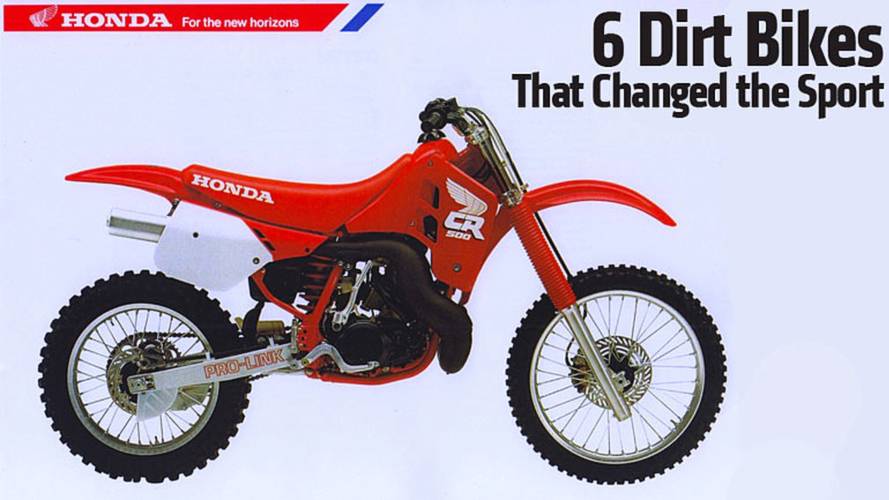 Our list of the top dirt bikes that changed the sport of motocross forever.

With the announcement of the Unit Skycraft and it's incredibly light carbon fiber frame, we see a product that may spurn the next giant shift in motocross bikes. Let's take a look back at six dirt bikes that changed the sport forever and helped give way to the bikes we're riding today.

The 1970 Husqvarna 400 Cross is the star of the 1971 classic “On Any Sunday.” It’s credited, alongside that Steve McQueen fella, with helping to bring the sport into the mainstream. The bike is timeless and forever tied to Mr. McQueen, one of the few truly iconic bikes in all of motorcycling and is included in the Motorcycle Hall of Fame in Pickerington, Ohio.

The YZ was released as Yamaha’s response to the Honda Elsinore. For $1890, it was nearly twice the price but included the best technology available on the planet including the first Monoshock ever featured on a motocross bike. It was lighter than everything else and had almost twice the suspension travel of any other bike and set the bar until 1980 when the rest of the industry finally mimicked the technology.

Yamaha’s next pioneer was actually kind of a stinker. It was too heavy and had too little power. It also, however, had the first modern day two-stroke engine. This iteration of the YZ250 was also the first use of liquid cooling on a motocross bike. Yamaha created so much of what we have today, it just took them a little longer to get the package right.

The 1988 CR250R was a completely new motorcycle over the 1987 model and was the first of what we consider the second (and current) generation of body styles. That being, it was the first to lower the tank and bodywork to better centralize the mass, thus making the bike easier to control. All of that said, it was still not a very popular bike, as people didn’t like the re-tune of the 1987 engine.

Yamaha took the 4-stroke dirt bike from a play toy to motocross race bike with the YZ400F. It was far more reliable than anything else in it’s class and was the only thing on the market producing that amount of torque across what must have felt like an endless 12,000rmp powerband. While the 400F still had its faults, it’s widely credited as the most important dirt bike of the entire decade.

It was four years before anyone could touch what Yamaha had in the YZ400F. The CRF450R had all the benefits of the 400F’s 4-stroke engine, but was far lighter, smaller, and easier to operate. It didn’t have the engine, braking, fueling hesitation, or starting issues the Yamaha YZ400F had and was far easier to transfer to and own. This, or the CRF450X (the plated version), are still what Boosti (one of our resident adventure guys) and rest of our off-road adventure buddies choose as their favorite.

Which dirt bike was the first to came out with a new feature that you really lusted after?