How to Convince Your Father You Deserve a Bike 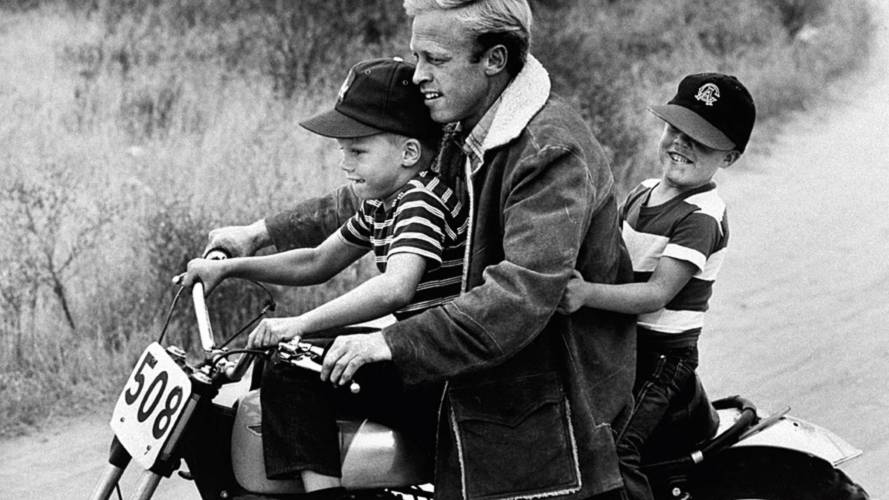 How to Convince Your Father You Deserve a Bike(Photo by Bill Ray/The LIFE Picture Collection/Getty Images) If you're a teenager, even a responsible...

If you're a teenager, even a responsible one, trying to present a strong argument to your parents that you're worthy of your own motorcycle is at least one rung higher on the ladder of difficulty than requesting permission for a Harley-Davidson tattoo on your arm, and one rung lower than getting a blessing to drop out of school to pursue professional motocross. And this is, frankly, part of the approach you should take in setting up your Dad to give you the green light. We say father because unless your mom's a biker herself, good luck asking her if you can put your life in harm's way -- at least in her eyes -- so you have to appeal to your father's masculine, free-spirited senses to make your two-wheeled dream come true. Here's how we suggest you approach the matter. And just remember, don't get emotional. That NEVER helps.

1. Preface your argument with your accomplishments. No, staying out of jail isn't one of them, but reminding your father that you've not only stayed out of trouble. Tell him you have focused on studies, started to learn a trade, or embarked on running your own fledgling small business. Remind him that you've involved yourself in adult-like endeavors that other teens haven't even thought of, whether it's volunteering to help those in need, donating your hard earned money to a good cause, building your own insert project here, or all of the above. The more you can stack up the evidence in your favor, the better.

2. Point to your responsibilities. Not only have you accomplished much for your youthful self, you're also mature. You've been gainfully employed during summers and after school, and rather than wasting your money on video games, the latest smartphone, or a ditzy girlfriend with expensive tastes, you've scrimped, save, and learned the magic of deferred gratification. Being financially responsible is a strong indicator that you're head and shoulders above your pimple-faced peers.

3. Remind him of his younger self. If your dad has any vestige of rebellious spirit left in him, he'll remember what he was like. But don't point to the bad stuff, like the time he drunkenly vandalized a rival's bike. Harken back to the time when he rode across four states on a whim, which challenged him to go further than he had ever gone before on a motorcycle—all before he was 21. Tell him it's the stuff of legend in your family. Tell your penchant for proud father, "I learned it by watching you." Puff him up a lot.

4. Register for a Motorcycle Safety Course before you talk to him. Show him you're serious. Nothing says you're dedicated to riding responsibly by taking a bonafide safety course through a recognized organization like the Motorcycle Safety Foundation. Tell him it's paid for and scheduled, and that you'll get your motorcycle license before you even test drive the bike you want to purchase. Also, buy a copy of Proficient Motorcycling, read it thoroughly and leave it laying around so he can see it. More brownie points.

5. Involve him in the decision. Yes, you have your heart set on a black and orange vintage Honda CB750, but you want dear old Dad to feel included in the selection process. Pick 3-5 bikes you'd be willing to own (and can afford), and present them before Dad with the pros and cons (and costs) of each bike. Also, ask him what he would choose, but be sure to let him know which bike makes your pulse race. And no, don't make the Hayabusa part of the selection.

6. Have the gear already picked. Show Dad you're serious about being safe, and pre-select the gear you will ride with: full-face helmet, jacket, pants, gloves, boots. Get ones you can afford, but also make sure they're truly safe. Tally up the costs and show your Dad that you've saved up for not only the bike you want, but also for the requisite gear. It's a brilliant move that shows you're dedicated, smart, and thinking way ahead.

7. Deploy the "male bonding" argument. Milk this cow for all it's worth since your father likely craves more time with his maturing son. Let him know that you don't just want to ride, but you also want to ride with him and create the kind of memories that make him misty eyed in a reserved kind of way. Talk about how you want to plan a motorcycle excursion together, whether it's Route 66, a tour of some national parks, or even just a ride to his Alma Mater.

8. Learn the details. Study motorcycles as much as you can. Understand how they work and their specs (especially the one you want). Also, sign up for a motorcycle maintenance course at your local community college. Sure, it makes for a stronger case in your favor, but it will also pay off in the long run should your Dad actually give you the green light. What's more manly than riding well and being able to fix your own? Dad will be proud.

In the end, it's so much more than just about wanting a bike. It's proving to your father that you have the will, the knowledge, the training, the maturity and—of prime importance—the funds to get your first motorcycle. Be passionate, not emotional. Plan how you'll approach him, prep the argument and then give it the full beans like a man. He'll respect you and you just might get him to join you instead of just getting the nod.