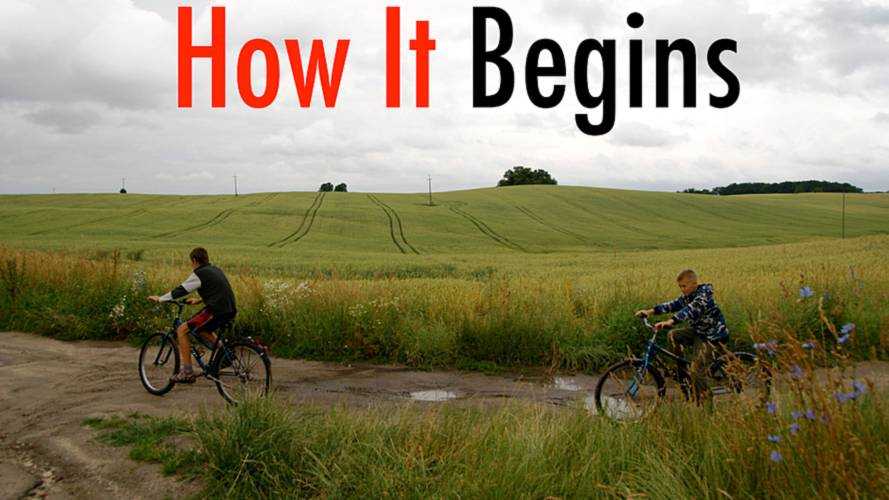 Carter Edman reminds us how it begins. Your obsession with motorcycles begins with a nearly 200 year old invention, the bicycle.

It was a Huffy BMX, black with graphics that could only be described as “radical.”  Pads on the handlebars and top-tube, “bear-trap” pedals, and real brakes – front and rear – that were operated by hand levers, not a coaster brake.  I would park it right in the middle of the garage, like it was some secret military vehicle, ready to launch and go shoot down a Russian spy satellite.  A group of us would ride together, and in my mind we were a squadron of P-51s, desperados riding into town, the A-Team saving the day, White Fang and his wolf pack.  It was the first thrill of riding.

It was the days before kids had to wear helmets, knee pads, and inflatable suits every time they left the house.  Before we took a screen with us everywhere we went.  By today’s standards, we were neglected, in that not every waking moment of our young lives was scheduled for us.  For long afternoon stretches, we were unsupervised and, lacking cell phones, unreachable.  It was the first thrill of freedom.

It was wheelies and makeshift jump-ramps at the bottom of the driveway.  Racing like mad to the end of the sidewalk, then into the woods that now are gone.  Improvised games, often involving ridiculous tests of bravery or pain tolerance, abounded.  Jumping curbs and flying tackles was the norm.  It was the first thrill of danger.

It was the first thing that I was mechanically responsible for.  I found tools in the basement and tinkered.  I went through rear tires pretty quickly and learned how to change them.  It was the first thrill of self-reliance.

Few pleasures in life are as purely exhilarating as your first bicycle.  That taste of riding, freedom, danger, and self-reliance is intoxicating.  In many things, we give up childlike wonder as we settle into routine and predictability.  As the likelihood of ever actually becoming an astronaut asymptotically approaches zero, the anticipation of real magic dwindles.

But those of us who ride keep it alive.  Most of us started at one point on a bicycle, and we can still feel the burning in our thighs as we tried to pedal as fast as we possibly could.  If you were like me, you even twisted your right wrist, opening an imaginary throttle to the stops.

Thirty-plus years later, I still feel every bit of that thrill.  This is something that does not have to dwindle.  We don’t need fantasy or regrets: we have motorcycles.

So be sure to wave to the kids in your neighborhood on their bicycles.  After all, they’re bikers, too.