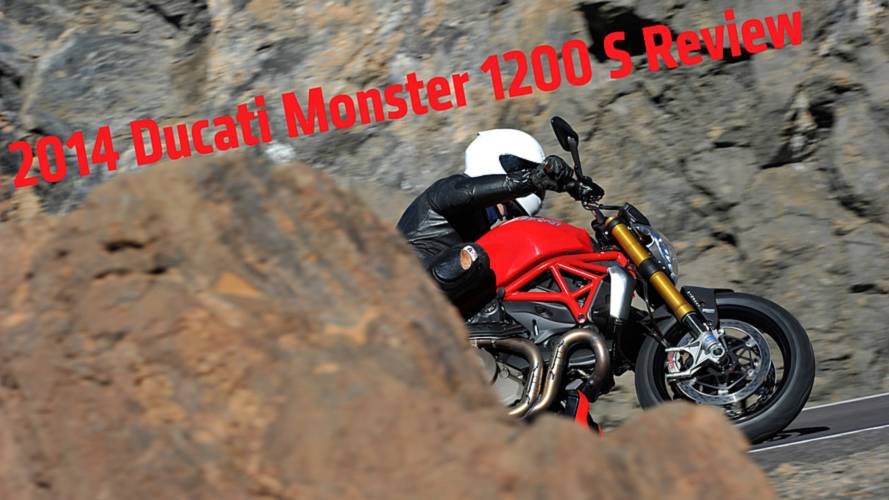 Wherein we release a monster on the roads of Tenerife.

If a Panigale is too much, a Streetfighter is too impractical and a Multistrada is too big, then the all-new 2014 Ducati Monster 1200 S may be just right. It’s the friendliest 1,200cc Ducati and also the most fun to ride. We did just that today in Tenerife, Spain.

Take a Testastreta 11 motor from the Ducati Multistrada and Diavel and up the compression ratio to 12.5:1. Different cams drop power by 5 bhp to 145 (on this S), but peak torque remains the same at 92 lb.-ft. What does grow is the breadth of that torque curve, which becomes fatter further down the revs.

Bolted to that engine are separate front and rear steel trellis subframes and the front of the shock, which attaches directly to the rear cylinder. Atop the engine is a steel (instead of deformation-prone plastic) fuel tank and behind it is a generously sized seat. This S model wears Ohlins NIX30 forks and a single-tube Ohlins shock. Both fully adjustable, obviously. It’s also equipped with the same top-shelf Brembo M50 radial calipers and radial master cylinder as the Panigale. Those, combined with the Monster’s long wheelbase and rearward weight bias (now 47 percent front, 53 rear) make this the fastest stopping Ducati currently made.

Further distinguishing the S model are machined, Y-spoke rims and the availability of white paint. Both this S and the plain Monster 1200 wear a full-color, TFT screen instrument panel and both are equipped with adjustable electronics in the form of a Ride By Wire throttle, traction control and ABS.

We did 125 miles through the mountains of Tenerife, a Spanish island off the coast of Morocco today. Those mountains reach as high as 12,000 feet and are largely exposed volcanic rock, with little vegetation to hold hot air as the ocean winds sweep the island by night, so temperatures vary widely every 12 hours or so. That regular fluctuation expands and contracts the island’s asphalt, turning it into some of the bumpiest we’ve experienced. The roads here are also incredibly narrow, packed with tourists and curve around hairpins so tight, that some were too slow to take even in 1st gear.

Tenerife's roads are as beautiful as they are terrifying.

That was a lot to manage following the 30 hours of consecutive air travel it took to get here, but luckily for this zombie, the new Monster is probably the friendliest 1,200cc V-twin you’ll ever ride.

A lot of that is down to those variable riding modes. Sport is as sharp and aggressive as anyone could want, resulting in frequent, inadvertent power wheelies, but Touring is smooth as can be, backing off throttle response and adding in some more ABS and TC. Urban drops power to 100 bhp, further desensitizes throttle response and maxes out both the ABS and Traction Control. Most journalists on the launch reported spending the majority of the day in Touring.

This Monster 1200 S is kinda/sorta the replacement for the old, too-focused Streetfighter 1098. Where that bike was as uncomfortable as the superbike it was based on and no friendlier, the Monster is just as fast, genuinely comfortable and, with those riding modes, can chose to be either just as aggressive or actually work with you to facilitate fast, safe riding. Where that old Streetfighter was too uncomfortable, too sharp and too jerky with unsorted fueling, this new Monster is the picture of perfect composure.

It’s definitely worth calling out the Monster’s stunningly perfect fueling, which delivers predictable, linear response whether you’re lugging it up a hill at idle speed or bouncing off the 11,000 rpm rev limiter and plays a big part in making this such a friendly bike.

I’m going to use that word “friendly again because it was so necessary today. In the morning, corners hid in shadows as a low sun pointed directly into our eyes. Those shadows were dark enough that it was frequently impossible to tell which way they went and wet patches were totally hidden. Add to that the Italian pace and approach to passing — always — and we needed a bike that was as cordial as it was fast. And that was this new Monster.

Just cruising along, it’s easy to forget the huge performance this motorcycle is capable of. The wide, flat handlebars are rubber mounted to kill vibration (it works) and your feet rest atop just-right pegs through rubber pads. The riding position is naked perfection, just forward-leaning enough to minimize the effects of windblast and upright enough for all day comfort. That’s aided by a good seat and great suspension which matches compliance with control. The only part of my body that’s even remotely sore right now is my brain.

But, drop a gear or two and grab some throttle and all that relaxed comfort is immediately replaced by visceral speed. Make no mistake, this is an exceptionally fast motorcycle. We got nowhere near its limits today, even dragging knee through bumpy blind corners.

Torque comes on strong just above idle and never quits. The motor is smooth, feeling more like a very torque inline-four than it does the uneven, grumpy V-twins that Ducati used to put out. To put its performance into perspective, the old 999R superbike from the mid 2000s made only 5 bhp more, but 6 lb.-ft. less and was only 2lbs lighter. The Monster’s suspension is just as nice, its brakes are better and it’s much easier to ride.

The only niggle on the entire package? The passenger peg hangers are integrated into the rearsets (you can’t remove them without losing the rider pegs too) and protrude outwards into the space your foot wants to occupy. It’s annoying, but you’ll get used to it. My size 11 Supertech Rs sat pigeon toed on the bike, but even riders with smaller feet had the same issue. It’s a pain, but you’ll get used to it.

The Monster 1200 S would be an awesome commuter on weekdays and one of the fastest bikes on the road on weekends. One which is unprecedentedly friendly and, thanks to that ease of use combined with the advanced electronics, exceptionally safe too. More importantly, it’s as evocative and emotional an experience as any Ducati superbike, just one you can live with all day, every day. Ducati, you are on a roll.

Leathers: Custom Icon (N/A, you wish you had one)