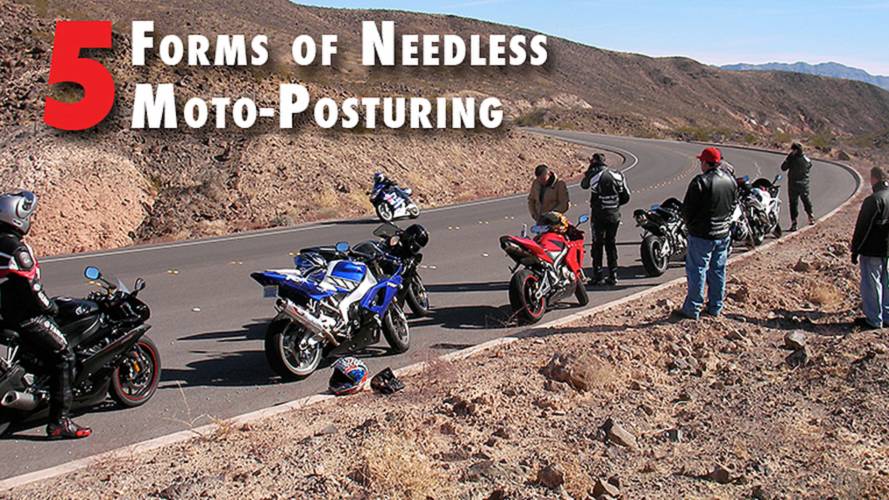 Let’s be honest: as motorcyclists, our culture is steeped in needless posturing. Here are the five worst forms.

Let’s be honest for a minute: as motorcyclists, our culture is steeped in needless posturing. The sheer complexity of our fellow enthusiasts conceit ranges far and wide. An assemblage of brand loyalties, silly prejudices, firmly entrenched opinions, questionable beliefs, and passionate sentiments await the uninitiated as a motley graph of affectations from which to judge exactly what sort of motorcyclist one might be. How best to peacock at the local coffee shop meet? Where does one find an honest leather worker to fashion your pirate costume? When does typing in all caps become acceptable in your multipage forum diatribe? How much longer do I have to stand here listening to your track day stories? We all do it to some degree and we all know at least one person who insists on the value of these things. Here are some of the sillier ones.

Now don’t get me wrong, fiber-reinforced polymers are pretty cool. The applicative properties of added strength and lightness are endless and can be highly useful. Though if it’s not a wheel or a frame, it just seems like tinsel on motorcycles. I could spend a few grand in the carbon parts catalogue and save some weight, or I could save an equal amount of weight by simply eating a smaller breakfast every morning. Carbon fiber as protection means protecting an expensive piece with a slightly less expensive piece, so that doesn’t work out. That leaves us with the fact that it looks hella cool, and it does. It’s basically jewelry that says to the onlooker that we take this motorcycling thing very seriously. Do we like to shine up all those beautiful bits of graphite weave right before the next meet? Yes we do.

A little alarm goes off in my head whenever I hear a motorcyclist get derogatory about another’s tire wear. I’m specifically referring to chickenstrips, a name referencing the strips of unscathed rubber at the edge of a tire which suggest a rider has not reached maximum lean on his or her motorcycle. This kind of posturing is a silly notion, and only reinforces the idea that the speaker is the sort of person who often rides at a breakneck pace at full lean on public roads. Is it a good idea for a commuter, newbie, or frequent in-town rider to be using all of their available traction around traffic and other road hazards? Of course not. Tire wear tells me little about the skill of a rider, but the way others discuss it tells me everything about their riding disposition.

Often our strongest passions as motorcyclists are brokered around the vestigial technologies of yesteryear. These purists posture and clamor for a simpler time, without fuel-injection, or antilock brakes, or liquid cooling, or traction control. Mechanical carburetion is looked to as the superlative process with which to fuel our engines. Antilock brakes and traction control are seen as a redundant complexity that adds more to the list of parts that might fail. And liquid cooling is just wrong somehow. This stance creates a bizarre anachronistic style of thought, which rejects the benefits of select technologies while unknowingly embracing others like modern tire construction, improvements in metal alloy composition for frames and wheels, advancements in brake and suspension technology, and computer-aided design. Let’s agree to view the improvements coming out of the bike industry as they are: refinements that keep us safer and increase our enjoyment of the sport.

Oil and Tires and Lubricants, Oh My!

This one had to be brought up for humor value if nothing else. If you’re keen on getting motorcyclists worked up with insensate rage on the internet, there are few avenues as easy as asking what sort of tires or oils you should be running on your bike. Pick a forum and have at it. Opinions will fly in a poorly worded confetti storm of anecdotes, homemade experiments backing dubious claims, egregious personal attacks, and the ancestral usage of various brands through scores of bikes and generations of families. This is electronic posturing in its purest form, a grand, crowd-sourced opus to all that is taken way too seriously in this little niche culture of ours. Having said all that, at least we can all agree Shinko tires are rubbish, right?

Bigger Is Always Better With A Sportbike

How much longer should this farcical attitude last? Sport literbikes will forever remain the pinnacles of performance in the minds of those who seek horsepower or those whose dealerships convinced them of it. More sportbike riders than not lack the necessary skill to use the advantages provided by a liter class bike. Fewer realize that the ergonomics and rider triangle between 600cc and 1000cc variants of the same bike are virtually identical. This sours the argument that “if you’re a big guy, then you need a big bike”. Even the uninitiated without access to a bike often pick up on the belief that if you get anything below 500cc you’ll “outgrow” it in a couple of months. As prevalent as this method of thinking is, let’s switch it up. How about being honest about our skill level, allow ourselves and others to ride at their own pace, and be a little more inclusive in this crazy cacoethes we enjoy together?

What sort of silly posturing do you see in the community? While I’m at it, what oil or tires do you think are clearly the best?