Watson On: The Top Speed Wars 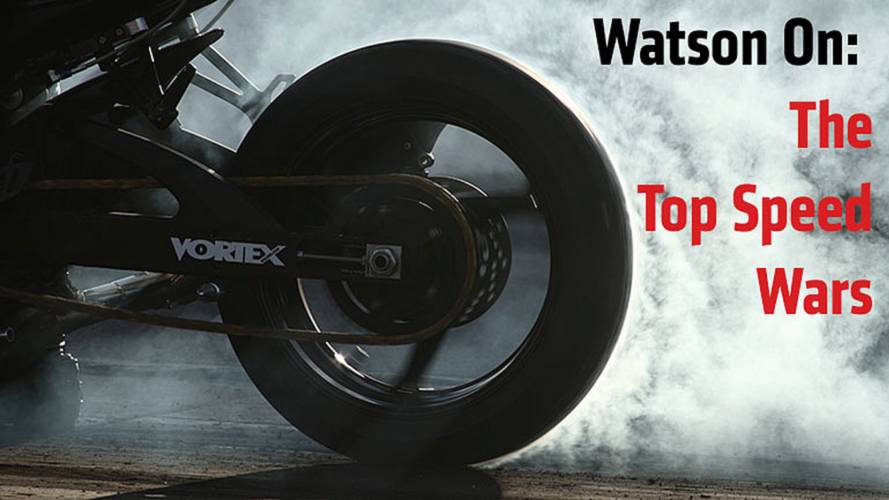 Not too long ago, motorcycle manufacturers competed to make the fastest bike in the world–the top speed wars. What's the next great two-wheeled battleground?

There was a time, not that long ago, when motorcycle manufacturers were locked in an ongoing battle with each other in trying to design, produce and sell a road bike with the highest top speed.

Speed may be dangerous in the wrong hands, but speed is also sexy and it helps attract buyers to new motorcycles. Back then, if you could brag that your bike was capable of 180 mph, the chances were any of your bike-loving friends could have gone out a few months later and bought a bike that the manufacturers claimed would do 185 mph.

It was the Honda Fireblade that started it all and fuelled a battle amongst the race replicas that would eventually escalate leading to a showdown between the “hyperbikes,” as they were called then — Suzuki’s Hayabusa, the Honda Blackbird and latecomer to the fight the Kawasaki ZX-12R.

Whether you would ever achieve that magical top speed claimed by any of one of the manufacturers would have depended on a number of things; such as where you were riding, weather conditions and if members of the law enforcement community were about.

More importantly, it would also rely on how big your balls were to actually ride at those speeds. There was also no way of knowing if anyone ever did achieve what their bikes were capable of. It was your word alone that you managed to ride it over 150 mph. it was just nice to know as you shut the garage door that you had a bike that could achieve ridiculous speeds.

But then something happened, and I’m not sure exactly what it was. Maybe it was the economy taking a nosedive or interfering bureaucrats demanding a cap on how fast a motorcycle should be allowed to go. Perhaps it was a combination of both, or maybe the bike manufacturers just lost interest in trying to out do each other in the speed stakes and reigned things in to ensure if, nothing else, they survived the recession.

But with the green shoots of financial recovery starting to be seen around the world and proof that last year in the U.S. that bikes were starting to sell again I’d like to see things pick up in the industry that gets the manufacturers trying to out do each other again. Whatever performance-enhancing technology makes it on to the top end super bike it will one day filter down to the more affordable bikes that I like to ride and own.

The maximum speed thing is dead.

The motorcycle manufacturers seem to have gone cold on the idea of top speed and have sat around a table and agreed to settle for around 186 mph as the acceptable maximum top speed for all road-going sports motorcycles.

But without that speed factor, a little bit of the excitement has gone that came with each manufacturer trying to out do the other. It also created a friendly rivalry in the motorcycle community, huge brand loyalty and caused a lot of conversation and debate amongst the enthusiasts.

So what is it going to be next thing we all get excited about? Which bike has the most safety technology built into to it, which ABS system works better than the other, or having switchable traction control better than non-switchable? I really, truly hope it’s none of these.

I maybe being naïve, but if we currently have a fast sportbike with around 180 bhp, then maybe the next big thing is going to be a motorcycle with 200bhp. We’ve been promised 200bhp bikes for a few years, but as of yet nothing has materialized.

Just like the top speed battle of the past there was absolutely no reason to have a motorcycle capable of running at more than 170 mph. It gave the manufacturers something to promote about themselves and us the riders to enjoy watching from the sidelines. A bike with 200 bhp is something to be talked about, looked at and considered.

We’ve done the speed wars, maybe now is the time for horsepower wars. I’m not sure how a 200 bhp plus motorcycle rides, but with the advances in all of the electronic technology, I’m willing to give it a try. If nothing else, I hope it will give me something to talk to my grandchildren about one day when they ask what was the scariest motorcycle I ever rode.

Motorcyclists Gather To Give Vietnam Veteran His Final Ride
Does This Custom Speed Triple Flat Tracker Have Warp Drive?
In A Month, Energica Has Sold As Many Bikes As In All Of 2019
This Is A KTM And It Produces 600 Horsepower
How Deconstructing Easy Rider Helps Rebuild Chopper History

Motorcyclists Gather To Give Vietnam Veteran His Final Ride
Does This Custom Speed Triple Flat Tracker Have Warp Drive?
In A Month, Energica Has Sold As Many Bikes As In All Of 2019
This Is A KTM And It Produces 600 Horsepower
How Deconstructing Easy Rider Helps Rebuild Chopper History
Commenting Guidelines