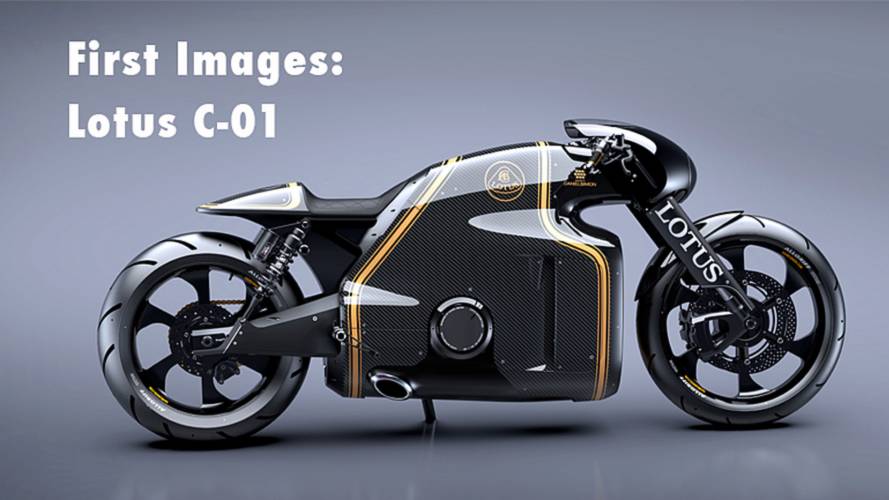 Images of the Lotus C-01 concept bike have officially debuted. From the mind of Daniel Simon, the craftsmen of Kodewa and the Holzer Group this bike is pure science fiction.

These are the first official pictures of the Lotus C-01 road bike that have just been released showing the first prototype that is road registered and currently under final development and testing.

Although it has the famous Lotus name, that is the only connection to the famous British sports car company, as the C-01 prototype has been produced under license by German car racing team Kodewa and tuning firm Holzer Group.  These two companies have a connection to Lotus having prepared and run Lotus sports racing cars for several years.

It’s claimed the Lotus C-01 has a 200hp engine, which is actually a tuned version of the KTM RC8R’s 1195cc v-twin. There’s a steel, titanium and carbon fiber frame, inverted forks and a claimed dry weight of 399lbs. That for the moment is all we know.

The official press release issued this week from Kodewa stated: “Following two years of careful planning and intense development, Kodewa is delighted to announce that the prototype of the world’s first motorcycle to bear the legendary Lotus marque is now road registered and ready for action.

Kodewa has been granted a license to produce the motorcycle by Group Lotus plc, the world renowned sport scar manufacturer and engineering consultancy.

'The Lotus C-01 motorcycle is not designed, engineered or produced by Group Lotus plc but is the result of a collaboration between motorsport veterans under the leadership of Kodewa, lead by Dr Colin Kolles. The development on the Lotus C-01 was carried out with the support of Holzer Group (co-owners of Kalex) and design guru Daniel Simon. Drawing on their wealth of motor sport experience, the team of engineers has designed a unique high performance superbike.

If the bike seems a little science fiction there is good reason behind it. The aforementioned designer, Daniel Simon, has been satisfying your inner Spock for the past decade on the big screen. His futuristic designs have been the center of many blockbuster sci-fi movies including, Disney's TRON:Legacy (the 'Lightcycles'), Tom Cruise in Oblivion (the 'Bubbleship') and his wildly popular design book Cosmic Motors.

No prices or definitive specification have yet been issued for the Lotus C-01 but it is thought the first bikes will go into production within the next few weeks in Germany and will then be available for sale in late spring this year.