Watson On: Ban the Bikes 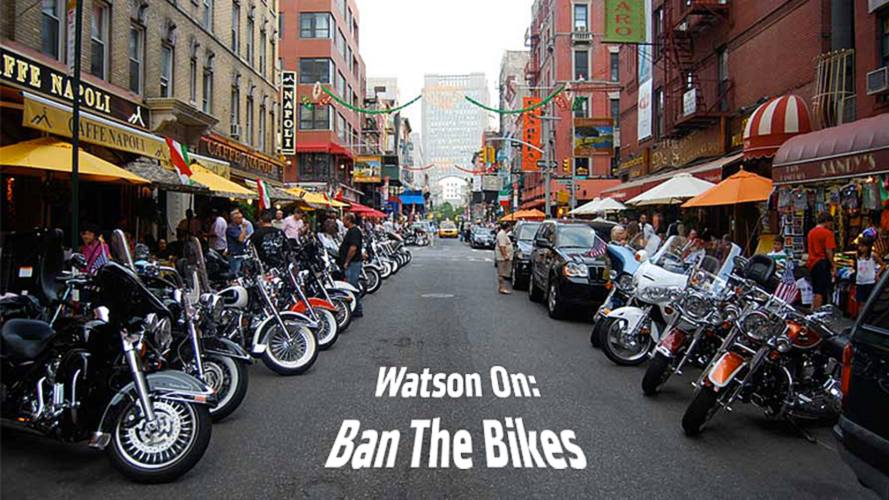 A New York legislator replies to a concerned citizen for his wish to ban bikes in his district.

As a motorcyclist I’m fully aware that I belong to a minority group that is regarded with great deal of suspicion by the public, police officers and now it seems by politicians.

As far as I know I have never eaten a baby, deliberately caused a fight, set something on fire, stolen anything, or just terrorized my local community while on two wheels just for the hell of it. Yet because I ride a motorcycle I am significantly different and therefore should be treated with a fair amount of caution, as clearly I’m up to no good.

Furthermore, it seems there are now some people that think there is no place in 21st century America for motorcycles, or for that matter bicycles, as this is the age of the automobile.

It seems that if some people, and by that I mean politicians, had their way motorcycles should be banned altogether – as in we shouldn’t even be on the roads.

If you think I am exaggerating, or making this all up take a look at what has happened recently in New York.

At the end of last year, a 17-year-old Suffolk County resident by the name of Matthew Cutrone wrote to his local politician and legislator, Thomas F. Barraga, to ask him what I think was a perfectly reasonable question.

The reason for Cutrone’s writing the letter was because his mother had been riding her bicycle last September, when a driver who wasn’t paying attention had knocked her off.

In his letter to Barraga, Cutrone said: “My mother was hit by a work van, whose driver claimed he didn’t see her. Ironically this accident took place in front of the Babylon Bike Shop. My mom did everything right, she was wearing a helmet and she was following the proper bike laws of the road… there should be some sort of bike lane or maybe just some warning signs to put around in certain areas so that drivers can know when to be careful of bicyclists.”

First off, full marks to a young man for taking the initiative and raising a valid point with his local legislator. I wish at such a young age I had been that wise and written such an intelligent letter.

However, it took 70-year-old Barraga almost six weeks to reply to Cutrone, But when he did his letter was shocking to me and maybe also to you if you ride a motorcycle. Not only did Barraga say that Cutrone had to accept that he and his mother lived in ‘a suburban automobile community’ and that riding a bicycle was an extremely dangerous thing for anyone to do in the area.

Barraga also went on to say: “I have lived in West Islip most of my life and my personal feeling is that no one who lives in our hamlet or for that matter in Suffolk County should ever ride a bicycle or a motorcycle…drivers expect to see other drivers on the road not bicyclists and motorcyclists.

“Reality at times can be difficult for some to come to grips with but giving false hope would be inappropriate.”

As you may imagine, Barraga’s letter  caused an immediate and major stir amongst social media as well as the bicycle and motorcycle riding community in Suffolk County.

However, Barraga is completely unrepentant in what he stated in his letter and says he is standing by his remarks.  “I’m not going to tell them what they want to hear, a lot of fluff. I tell them the truth,” he said.

I am assuming here the ‘them’ the County Legislator is referring to are people like you and me who like and enjoy riding motorcycles (and bicycles).

Barraga is also of the opinion that it’s perfectly acceptable that motorists in West Islip ignore road-warning signs. To compound things further he is completely dismissive of Matthew’s helpful suggestion in his letter to create bike lanes in the area, as they would never work.

I can accept that as a group of enthusiasts not everyone can, or wants, to appreciate riding a motorcycle, or for that matter a bicycle.  But to publicly state that you shouldn’t ride because you live in an ‘automobile community’ makes the hackles on the back of my neck stand up. This is not the first time motorcyclists have come under fire from politicians and I have every reason to believe it won’t be the last. I also know I won’t ever be riding in West Islip, New York anytime soon.