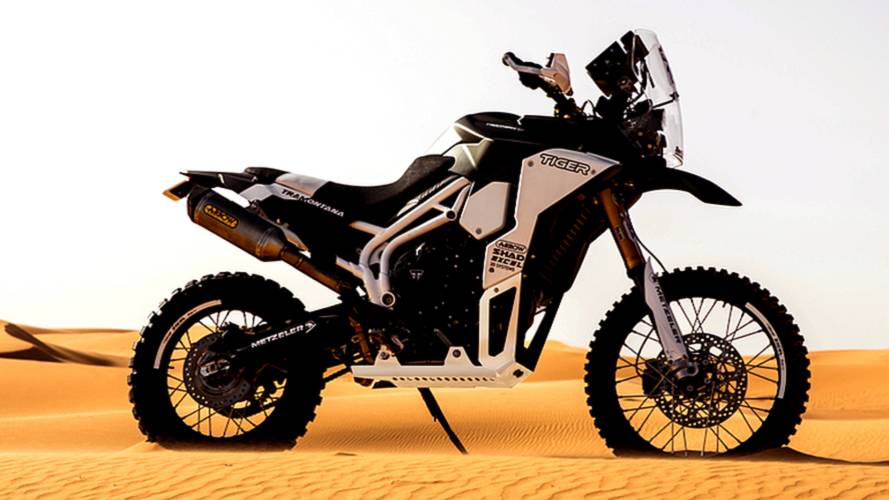 Two brothers, a custom Triumph Tiger, and a five-day journey through hell.

The Panáfrica Rally is a brutal five-stage event that pits riders and their machines against some of the harshest terrain and heat that the unforgiving Sahara Desert has to offer. Competitors spend months training their bodies and minds to get them as prepared as possible to ride over 1,200-miles of Eastern Moroccan desert. Like the riders, the vehicles running in the event require a myriad of modifications to withstand the harsh North African environment. This gives manufacturers an opportunity to demonstrate their machines' performance durability. Enter brothers David and Felipe Lopez, and the rugged Triumph Tiger Tramontana.

The Tramontana - named for the strong, frigid north wind that blows through the Pyrenees Mountains in the Lopez Brothers' native Spain - required less than a dozen key mods to get it ready for the rally, none of which altered the Tiger too dramatically. The small number of modifications needed reveal just how capable the 800 XCx truly is in its stock form.

“The modifications we’ve made to the Tiger Tramontana take the all-round capability of the Tiger 800 (XCx) to a much more focused level required for this type of extreme off-road riding, the Tigers are phenomenal off road, but in their original configuration have been conceived to perform well in other conditions away from the dirt,” said brother David. “The things that have changed have changed for a reason, either to improve performance, to reduce weight, or for more appropriate functionality in racing conditions.”

“The end result is undoubtedly beautiful, but its form has not compromised any aspect of its functionality and that Tiger character and signature silhouette is very much present," said brother Felipe. "The guys in charge of the styling and modelling have created a true beauty out of raw functionality and robustness, and have done an incredible job."

READ MORE: A Tiger in Mexico: Balls on Fire

The Lopez brothers have been working with a support team from Triumph’s Hinckley-HQ on the Tramontana for more than half-a-year, building a machine for one of them to pilot in the the late-September  Panáfrica Rally. The Spanish siblings started with a Tiger 800 Xcx and modified the it to not only perform more competently in extreme off-road conditions, but to be a competitive enough enduro racer to hang with the rest of the professional grade, factory-backed bikes (roughly a dozen of which are piloted by season Dakar competitors like Gerard Farres and Stefan Svitko).

“This is a racing bike and it’s going to be raced in the most extreme terrain and conditions over distance, so the primary focus has always been function over form,” said brother David. “A lot of people have poured a lot of focused expertise and passion into delivering what we think is a stunning bike. Now it’s just up to us to ride it but whatever the outcome it’s been an amazing adventure from day one.”

The brothers are cautiously optimistic, well aware of what they’re getting themselves into and the danger that entails. They are pretty confident in their abilities and that of the Tramontana, however.

With models like the Tenere T7 on the way, it’s not too crazy to think that Triumph may release a toned down (possibly limited) production variant of the Tiger Tramontana. To learn more you can check out the websites for the the Panáfrica Rally and Triumph’s For the Ride site.