Putting The Adventure In Your ADV Ride 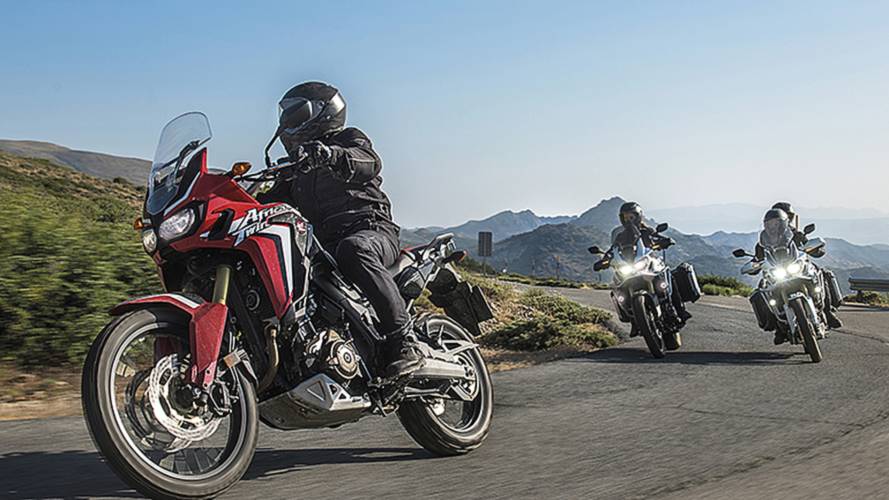 Between unscheduled stops, hidden history, and the road's many characters, thank god I've learned not to let plans get in the way of adventure.

The evolution of the modern ADV touring motorcycle has made it possible for the average person to just pack up cases, climb on and ride from coast-to-coast, or even to Alaska or South America, without hesitation. Reliability is that good. The sheer mileage some accumulate year after year has spawned groups and rally awards like the Iron Butt and many others.

Don't get me wrong, there is nothing at all wrong with this for the average adult rider. Some of us, however, are still growing up.

As a kid growing up in Northeastern Pennsylvania, my riding world was fairly small (one hundred square miles, perhaps?) Day after day, we rode the same fire and mining roads, power lines and scrappy wooded trails. We never got bored of them. For each of the better part of four seasons, the conditions changed drastically. Spring was mud season. That's when the mountain streams were running at their peak as the snow and ice melted and the ground thawed. I can still smell the fresh mountain air and the steaming mud that plastered the engines 125 and 250cc dirt bikes we thrashed soundly on the average Saturday morning adventure ride. Things broke in mud season.

Typically we rode to places that took a bit of effort to get to and presented a challenge when you arrived. Chinchilla Run was one typical destination. A steep, rocky single track hill climb that ran under the power lines, it was difficult for us in even the best of conditions. If you were skilled or lucky enough to make it to the top without crashing or breaking something, you joined the gauntlet as the next rider gave it a shot.

You had to know your machine's appetite for fuel well enough, as there were no gas stops. Some of us carried a small bottle of two-stroke oil and risked a high speed chase by peeling off on a road or highway for a few miles to the closest station to fill up. The chases happened more often than not. An experienced kid on a motocross bike is simply no match for a small town cruiser.

Summer however, meant the ice was off the reservoirs (Sunnyside, First Dam, Second Dam Third Dam and Conners Dam) and were now 'open' for swimming. The mountain berries were ripe, too. The State Dept of Water rangers drove white 4WD pickups patrolling the roads. These Deputy Dogs would give chase, because swimming and fishing was prohibited in the state's drinking water reserves.

It became a precision drill to go from doing the backstroke in your whitie-tighties one second, to buckled Full-Bore MX boots and Bell helmet the next, You had to get the bike started and up to speed before they blocked the road in. Rumor had it they'd beat you or throw a stick into your wheel to stop you but only one buddy of mine got caught with his pants down, so to speak. The Ranger just pulled the spark plug wire off of his bike and drove off. Granted, it was a long push home for him.

It Started With An SL125

The 1972 Honda SL125 was my first bike and my machine of choice. My choice was of course limited to what was for sale in the paper at the time for the three hundred and twenty-five hard-earned, paper route dollars I had in the bank. But it did serve me well for as long as I owned it.

It had everything I needed at the time except a kick-starter. The shaft had broken off and though I lived in a house with a hill for a driveway, more often than not, the places I stalled the engine were at the bottom of sandy or muddy strip mining pit.

This annoying inconvenience actually served several key developmental purposes. It put muscle on my scrawny frame, it helped develop planning and time management, and it taught me advanced diplomatic and sales skills. It took a very persuasive personality to convince a fellow teenager, often my senior, whose machine had a working kick-starter and was already running, to dismount and help me bump-start mine in such adverse conditions.

It would be considered foolish by most to plan a group ride across the USA on 70's era 2-stroke dirt bikes but look it up! Big Dog Adventures did just that.

My riding buddies are full of ideas for next year. Ride vintage bikes, Moto Guzzi's and BMW's across the country on the back roads just to see if they'll make it. Buy 450cc DRZ's and try to find Moab without riding roads or head down to the tip of Baja. But is not just the riding we are drawn to.

In the past we've stayed in firehouses, caught native cutthroat trout in remote mountain streams, and even spent time in an amateur astronomer's home perched atop a mountain in British Colombia. There we had opportunity during the day and night looking thru a massive telescope. Witnessing a solar prominence eleven times the diameter of the earth mid-day and the rings of Saturn at night was a rare opportunity we will remember for the rest of our lives.

This year, instead of some 1500-2000 mile week long marathon, we rented a very nice house with a great view and did 100-200 mile day trips. Some days less is more. Sometimes, the smaller the footprint, the greater the reward. I'll be looking at a lot of shorter rides in my own back yard this year.

This year we might bury a treasure as we search for that of Forrest Fenn, Perhaps ours will contain cigars, whiskey, money, even letters, somewhere along one of the routes to be visited and dug up for a toast by the remaining group as we each go the way of our fathers, full-throttle into the next world. True adventure, as Forrest himself knows, is in the Thrill of the Chase; the places you see, the things that you witness, the people you meet along the way.

Each year, more of our old growth forests burn in wildfires and each burn exposes a layer of history that has been hidden for decades, even centuries. After the fire is out and the rains come, treasure hunters with metal detectors scour the landscape for coin and artifacts. I was on an old road in Wyoming years ago near the old Oregon Trail and saw a pile of rotting timber. Picking around, I found what I believe to be an old iron axle from one of the wagons that perhaps carried settlers and adventurers cross country in that great migration west, two centuries ago.

Another time, riding north of Flagstaff AZ, we turned down an unmarked dirt road on a whim and followed it to the end. We found ourselves at the edge of the Grand Canyon. No tourists, no admission, no signs. There was an old wooden fire tower there.

We decided to sleep there that night. It was very cold. We got up early the next morning as it was just getting light. The place was covered in an icy fog. I looked up, and for a moment saw a brief glint of sun peek through the fog. Climbing the ice covered tower revealed that the lookout platform at the top was just above the low lying cloud cover. A brilliant blue sky was spread out there above us. Looking out over the Grand Canyon, it appeared that the clouds were a massive waterfall tumbling over the edge. I've never seen anything like it since.

This unscheduled stop was not at all in our plans, but thank god I've learned not to let plans get in the way of the Adventure.