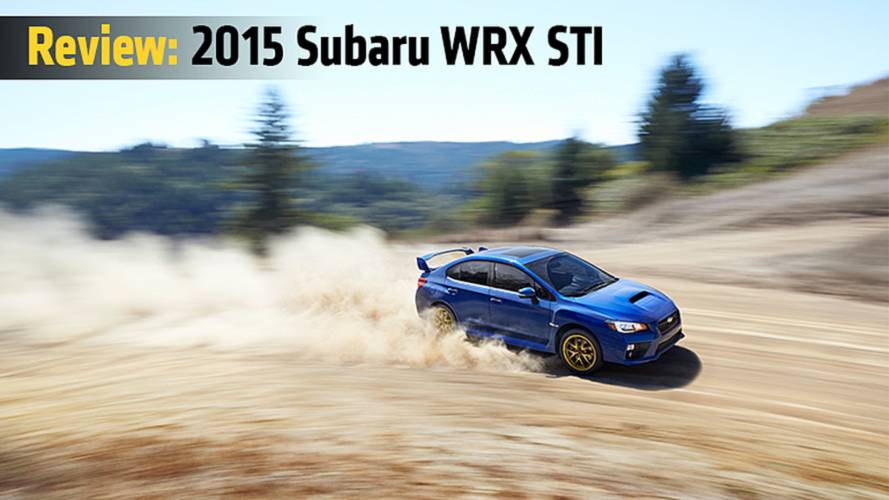 The 2015 Subaru WRX STI has been unveiled to the press and we sent Jason Fogelson to explore what the super sedan can do on a track and through some dirt.

I'm not a racer, but invite me to ride or drive on a racetrack, and I'm there. When the invitation hit my inbox to experience the 2015 Subaru WRX STI in Monterey, California, including some time on the track at Mazda Raceway Laguna Seca, I nearly broke my fingers pounding out my response on the keyboard. YES!

I managed to bring my heart rate back to normal, and to consider the STI. The WRX is the hot version of the Subaru Impreza, and the WRX STI is the even hotter version of the WRX–"STI" stands for "Subaru Techica International Inc.". An independent company that was established in 1988 to manage Subaru's motorsport activities. In concert with the regular Subaru engineers, STI plans and develops the WRX STI. They even make their own line of tuning parts and accessories for Subaru vehicles but also builds and races specialty Subarus across several racing outlets around the world. Famously earning recognition during their championship years competing in the World Rally Cross arena.

The new 2015 WRX raised a few eyebrows when it was launched to the press a few months ago. The controversy mainly centered around the option of a CVT (continuously variable automatic transmission), almost never considered a high performance feature. The standard six-speed manual is still the primary choice, but the braying can't be silenced. Some WRX purists were offended, and chose to pan the new car as a result.

The 2015 STI suffers no such controversy. Available as a sedan only (no hatchback), and with just one transmission -- a fantastic six-speed manual, with an available short-throw kit.  Power comes from a 2.5L turbocharged four-cylinder Boxer (horizontally opposed) engine, tuned to produce 305hp and 290 lb-ft of torque -–a substantial bump over the WRX's 2.0L powerplant.

Enough facts and figures. What's it like to drive?

My first experience would take place on the track first thing in the morning. We went out in groups of four and five, with a Pro Driver leading us through the first lap to demonstrate lines, and strict instructions not to race or pass. I chose to drive sweep (last position), so that I wouldn't have to worry about slowing down any of the fast guys. Some of my fellow journalists have a lot of racing experience and ability, and some are just nuts. I like to use the track to experience the vehicle at close to its limits, without having to worry about adverse road conditions, opposing traffic or other (bad) drivers. It's a side benefit that I get to improve my driving skills -- every trip to the track does that.

Here's what I learned about the STI at Laguna Seca. I drove about 10 hot laps during the morning session, and another 10 warm up/cool down laps, and the STI handled every situation with amazing grip and grace.

There are several components that lead to great track performance, and STI has them nailed. First of all, hydraulic power steering (as opposed to electric on the WRX) delivers direct road feel and amazingly sharp turn in with almost motorcycle-like in its precision.

Working with the steering is Subaru's trademark Symmetrical All Wheel Drive, heightened with Active Torque Vectoring. In conjunction with the braking system and traction control, STI can apply brake pressure to the inside wheel during cornering, which sends more power to the outside wheel – drastically improving cornering performance.

I know that's a lame explanation, but it makes total sense behind the wheel. Other technologies and parts on the STI include a TORSEN limited-slip rear differential, a helical limited-slip front differential and an STI-tuned sport suspension. Making the WRX STI slightly more RWD bias.

Brembo, is an all to familiar name to motorcyclists, and the WRX STI is outfitted on all four corners with high-performance name plate. Experiencing them first hand on the track, I found that it was possible to accelerate hard and brake much later, knowing that the brakes wouldn't deteriorate while I was tucking into corners hunting for my fellow journalists.

The track is great, and I really enjoyed putting the STI through its paces. But after a lunch break, I was given the opportunity to explore the public roads in Carmel. One in particular peaked my interest. A long stretch of the thrill ride named "Carmel Valley Road." This, roughly, 30-mile two-lane snakes through farm country and local vineyards. Its a delightful bit of mixed terrain with dips, banking, rises and twists that follow the topography as the Gods intended. Luckily, it's a sparingly patrolled by the local CHP which offered up an invitation to entertain my inner rally ambitions.

The STI really shines on a road like this. On the track, the driving is really technical, but predictable. You know that the surface will be perfect, that there won't be any oncoming traffic, and that you're not going to get a ticket or run over a cow.

On a public road, having a car that is in tune with your reactions is incredibly important. This is where the STI steering feel really pays off. The car goes exactly where you point it, and inputs are practically telepathically transmitted. You know that feeling when you carve a perfect curve on your motorcycle? It's one of the great feelings on earth -- you choose a line, the bike leans to a precise angle and you sweep around the curve without any sense of effort, in harmony with gravity and centrifugal force. It's a beautiful feeling. I almost got that feeling on a few curves in the STI  -- amazing for a car, simply amazing, and the best evidence that the STI is really a sports car, not just a tuned sedan.

Some potential buyers will quibble about the big wing on the back of the STI, but Subaru claims that it's actually functional and delivers down force that improves handling at speed–or so the engineers say. I like the exterior design of the STI, especially the Launch Edition, which gets a coat of that Subaru Blue paint, gold wheels and some special interior trim colors.

STI is available in three trim levels at the start: STI (starting at $34,495); Launch (limited to 1,000 units at $37,395); and Limited (starting at $38,495). Subaru sees its competitors as the Mitsubishi Lancer Evolution (if they still churn those out), the Volkswagen Golf R, the Audi S4, the Mercedes-Benz CLA, BMW 3-series and Mustang GT. I'd also add the Mazdaspeed3 to the list.

The 2015 Subaru WRX STI isn't cheap. It's a reasonably priced sports car that has enough comfort and refinement to be a daily driver. It's rated to deliver 17 mpg city/23 mpg highway, but good luck driving with enough restraint to get that kind of fuel economy. You'll be looking for the long way home if you take your STI to work, and it will take an amazing level of maturity to keep a clean record during while the car is in your name.

If you are seriously considering an STI, you should think about joining a weekend race club so you can take full advantage of the car's abilities in a safe (and more importantly, ticket-free) environment. The STI and your family will thank you while you sculpt a permanent grin on your mug.