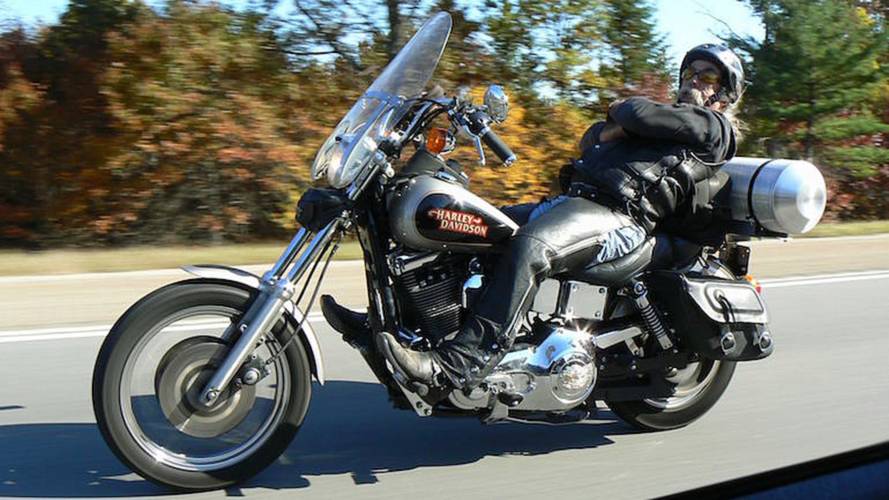 On October 16th Phil Comar will take another attempt at piloting his Harley-Davidson for almost 700-miles to raise money for the Michael J. Fox Foundation.

Phil Comar has been riding motorcycles for over 50-years, and has been riding with no-hands for more than half that time. Riding was something Comar shared with his father prior to him passing away in 2008 due to Parkinson’s disease.

“I watched him over the years diminish in his capacity,” stated Comar. “You are helpless at that time. I couldn't change any of that, but I hope I can change someone else's situation."

This led the seasoned rider - who is a motorcycle instructor and coach at Schoolcraft College in Livonia, Michigan - to searching for a way to make a marked difference in the fight against Parkinsons.

“Riding no-handed is a style of riding that I take very seriously and I do not encourage anyone to do it. I have been practicing this, and improving my skill level using everything I have learned over the years about basic and advanced fundamentals of operating a motorcycle and feel I am about as close to being a ‘professional’ as anyone has been when it comes to riding with no hands,” Comar explained.

"Sometimes I get mouths open and they can't believe what they're seeing," said Comar. "You can see them slow down, and pretty soon they're riding beside me. Videotaping it on their phone or their camera, whatever they've got with them."

Comar was floored by the sheer amount of attention he received with various local and national news channels covering his hands-free riding endeavors. This was helped along further when he set a World Record in October of 2010 by riding non-stop and hands-free from the Mackinac Bridge in Michigan to the Ohio State line at Sylvania, Ohio, a distance of 314-miles. In doing so, he raised $3,700 for the Michael J. Fox Foundation for Parkinson's Research.

The following October, Comar attempted a 525-mile trip - sans hands of course - though it was cut short when “an unfortunate incident just south of Toledo” put an end to the trip. Although he didn't reach his 525-mile goal, he did set a new World Record of 327-hands-free-miles and raised another $3,600.

READ MORE: Riders for Health - Do Something Good

By this point, Comar’s no-hands ride had become an annual charity event. In September of 2012 he rode his Harley 517-miles (from the Mackinac Bridge to Covington, Kentucky), though heavy traffic forced him to make an unscheduled stop which rendered his new record attempt a failure.

In 2014 Comar – who refers to himself as: “The No Hands Man” – made his first attempt at riding 680-miles without any steering input. Less than 150-miles into the trip, a “technical problem” forced a stop. He started again though, and rode a total of 534-miles (without ever leaving Michigan) hands-free. That was not only good enough for yet another World Record, but it raised $5,417 for Parkinson's Research. The next year the No Hands Man took another crack at 680-miles but to no avail, though the ride was still considered a success as he raised over $4,300. In 2016 he successfully rode 588-miles, earning another World Record and raising $5,716 for the Michael J. Fox Foundation.

Now Phil is at it again. The No Hands Man will try his luck once again at a 680-mile trip on Monday, October 16th. So far Comar has raised a grand-total of $26,628, all of which has kindly been donated to the Michael J. Fox Foundation for Parkinson's Research. As Comar’s unorthodox fundraising method continues to draw more and more attention, it’s almost a forgone conclusion that his 2017 ride will raise even more money than last year’s. Anyone interested in supporting Comar’s efforts can donate by clicking here.

READ MORE: Doing an Iron Butt Ride was Utterly Pointless (But I'm Glad I Did)

How exactly one goes about piloting a motorcycle for several hundred miles without the use of their hands is, admittedly, a bit baffling. From what I gather it appears this is achieved via a cruise-control device and leaning. A Large supplementary fuel-cell has been fitted behind Comar’s bike’s seat, enabling him to traverse hundreds of miles without being forced to stop for refueling. I came across a video that shows Comar in action, including him performing this feat on bending highways. Because the person filming is a fellow rider with a GoPro, you get a decent sense of how Comar does it.

Whether or not his upcoming record attempt is in vain, Comar will still be raising thousands for a truly noble cause. Any time riders take their love for motorcycles and riding and manage to apply that in a way that tangibly benefits society, I think that deserves to be applauded. It’s great to see those in the motorcycle world make a difference using what they know and love. A few months ago Alicia “The MotoLady” Elfving teamed up with Sofi Tsingos of GT Moto to build a one-off Brutale that was raffled-off, with 100% of proceeds going to St. Jude’s Children’s Research Hospital. Hopefully effort like these will inspire other motorcycle enthusiasts to explore ways they too can get involved in using motorcycling for good.

So best of luck to Phil Comar on his upcoming annual ride. We’ll be rooting for him.