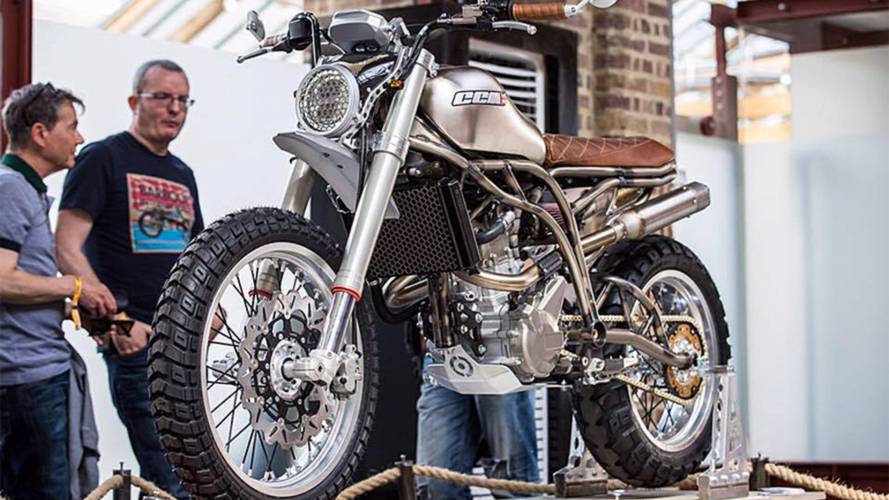 British motorcycle manufacturer CCM adds another weapon to its arsenal: the Spitfire Scrambler!

England’s CCM presented their new Spitfire Scrambler at the Bike Shed Show in London last weekend. The original Spitfire was released as a limited edition special a few weeks ago, with a production run of 150 machines. The Scrambler model is set for 250 examples with a price of £8,995 (US $11,563). The company already has orders for the first 100.

Both models share the same engine, a 55hp 600cc single that appears to come from a model BMW never chose to use. Past CCMs have employed choices of Suzuki, Yamaha, Honda and KTM engines. The standard Spitfire has a 19-inch rear wheel, while the Scrambler is fitted with a 17-incher and a modified subframe. It also adds a skidplate, high pipe and higher handlebar.

CCM (Clews Competition Machines) has a long history in the off-road market, originally using BSA engines in the early '70s. When BSA was in the process of ending production, many of the remaining 500cc B50 engines went to the off-road specialists at CCM. By this time the 2-stroke engine was the dominant force in motocross, but a few diehards stuck with the venerable OHV thumpers. Jeff Smith had won both the British and World Motocross titles in 1965.

John Banks was second to Roger DeCoster’s 380 CZ in the French GP, and won the second round ahead of Bent Aberg on a 420 Husqvarna. Banks lost the championship by one point to Paul Friedrichs on a CZ, and came second again in 1969 behind Aberg. By the 70s the European 2-strokes were joined by the Japanese entries and the 4-stroke era was effectively over. But Banks continued to race Cheney-framed BSA motocrossers with BSA engines modified by CCM. He was third in the 1974 British championship, and fourth the following year, when teammate Vic Eastwood finished second.