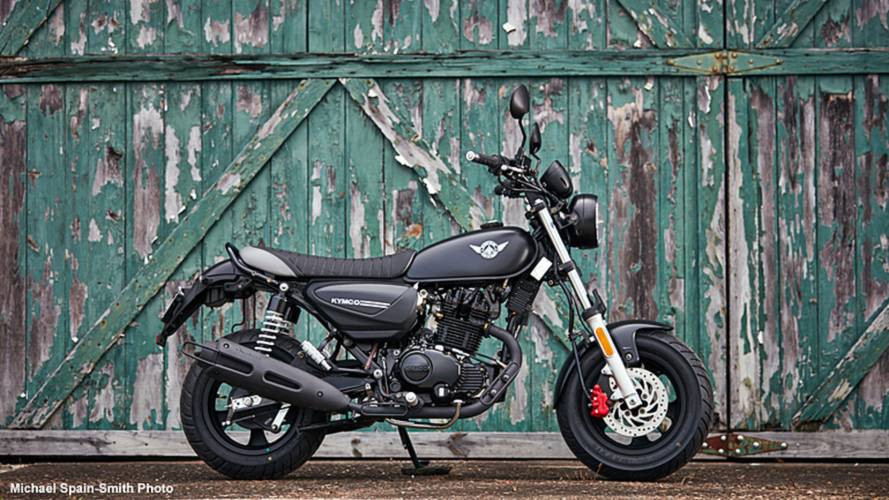 The 2018 KYMCO Spade 150 is as cool as the other side of the pillow. It features a retro look, peppy 150cc motor and a bunch of aftermarket parts available right now.

Anyone looking for a small displacement play bike like the 2018 KYMCO Spade 150 would seem to have a particular set of expectations that led them to such decision. First and foremost, he or she is looking for a lightweight, easy-to-ride and fun-to-thrash motorcycle that works well in a variety of situations, from surface streets to paddocks – and possibly some light off-roading if you dare. Most of all the person is looking for adventure on a small scale. The 2018 KYMCO Spade 150 is aimed right at the heart of this segment.

I’d like to call it the more affordable alternative to a certain small displacement fun-bike, the one that’s technically not a scooter but is a hell of a lot of fun to ride like a jackass. You know the one I’m talking about right?

This niche was reinvigorated (or arguably created) a few years back when the Honda Grom (yeah, that's the one) hit the streets. Since then, there’s been an assortment of clones trickling in from India and China, heck even Kawasaki offered up the kind-of-cool Z125. The Spade looks to capture some market share with a retro cool style that helps it stand apart from the Grom and its countless clones.

How Does it Ride?

We spent an afternoon exploring the streets of Ashville, North Carolina, aboard the Spade and came away with a mostly favorable feeling about the little bike – despite our feelings about the North Carolina weather (it rained a lot), First of all, the Spade actually gets down the road pretty well. The air-cooled 149cc, DOHC single, with five-speed transmission, gets the Spade moving right along. Fueling from the EFI was crisp and clean and if it gets anywhere near the 91 mpg that KYMCO claims, you will have a potential range of 145 miles, since it holds 1.6 US gallons of petrol in its custom looking fuel tank.

From the compact cockpit you have two centrally located round instruments that offer a speedo, tach, odometer, and neutral light among other amenities. The bike even has a power outlet so you can charge your phone. The levers feel meaty and the bars have a comfortable bend that compliments the look. The seat is a good looking unit with rolled stitching and a thick faux pad, but it is not really comfortable over the long haul. It also isn't great when riding two-up; I thought it was fine from the front, but my passenger complained she felt as if she was going to slide off the back at any moment. And, as I say, we both noted that the padding wasn’t that effective. Seat height is only 28 inches above Mother Earth, so just about anyone can touch both feet on the ground, even me!

The 12-inch aluminum wheels are wrapped in wide Maxxis rubber: 120/80-12 on front and a 130/70-12 on the rear. We did some serious back street bashing that day and the roads varied from smooth and dry to wet (very wet!) and slippery. We were constantly running from the rain, so the streets were wet, the leaves were slimy and it put the little Spade to the test in more ways than one.

It tips the scales at a claimed wet weight of 266 lbs, so it was easy to flick around the suburban hills of North Carolina, and the combination of a single 220mm front rotor, two-piston caliper and drum rear brake were more than capable of keeping it all under control. The tires seemed to offer plenty of grip in a wide range of conditions and the claimed 11 hp at 8500 rpm all but guaranteed we wouldn’t lose traction on acceleration out of the turns. I have to admit, though: it was fun trying!

As the miles piled up during our tour of the urban sprawl, a funny notion was creeping into my head: this is the type of riding that newcomers need to do. It is all about exploring your home base, finding the nearby roads that are fun to ride, even if they are not out in the countryside. Some folks don’t even have the option of riding in the hills and that is why these little motorcycles have become so popular. The entire experience is like a miniaturized ADV ride. I know it sounds crazy but hear me out.

An ADV bike has to be multi-purpose, capable of surviving unusual levels of abuse while being fun to ride. The areas you take an ADV bike are off the beaten path and should be challenging to both the rider and the machine. And this is exactly what we did on the Spade. We explored Ashville, we rode places that were in close proximity to town, but still obscure enough that it felt like exploring. Plus, the entire ride was fun. In my opinion, that is a mini-adventure machine.

The appearance of the Spade is what separates it from the crowd here. I like that it looks like a shrunken CB rather than a small street fighter. I’ve been a fan of the classically styled bikes that have popped up the past few years, and this mini-moto slips right into a slot that has been relatively unoccupied until now. I also found the bike fun to ride in town, or when exploring the slow-speed curvy roads of Town Mountain. It may sound silly, but those roads are awesome. Imagine a a never-ending race track with loads of turns, 180-degree switchbacks, elevation changes, and varied surfaces, but... uhm, at city speeds, and thankfully without much traffic. In this environment, the Spade was a blast.

The exhaust looks awful, but you can replace it with something better for a few hundred bucks. The triple clamp is very industrial in appearance and the footpegs look like bicycle stunt pegs; they don't look like they belong on this type of motorcycle.Is this weird-looking stuff a deal breaker? Not quite. These cosmetic issues can be addressed by replacing them with aftermarket parts that will tailor the look to suit your personal style. And the first batch of custom hardware are ready to go.

The folks from MNNTHBX.com have a complete line of aftermarket parts for the Spade 150 so you can put your touch on it right away. Custom parts include: Triple clamps, Clip-Ons, Bars and Risers, Turn Signals, Signal Mounts, Fender, Exhaust, Under-Tail Kit, Oil Cap, Headlight Shroud, Levers, Chain Guard, Stainless Brake Line, Mirrors, Rearsets, Öhlins Shocks and Fork Springs. Take a look at the decked-out Spade below for a glimpse of its potential as a customized ride.

Yeah. There is something I really like about the Spade. It has a style all its own, a peppy 150cc engine and it was a ton of fun to ride. It even hauled a total of 300 lbs combined passenger and rider weight and still hung right with the group. I had to wring the throttle to the stop, make accurate power shifts and keep the rpm up, but it handled it. The young guns on the ride were jumping curbs, doing small wheelies, drag racing form light to light and having a genuinely good time with it. And that is the point of these little bikes: to have some fun.

It is good to see KYMCO thinking outside the box here. This company could have easily built a two thirds scale Tuono clone or something like that but instead went retro. The Spade ticks all the right boxes on the fun-bike check list, too. It makes decent power, offers competent handling, is fairly comfortable to ride, and rings the register at a decent price point of US $2,999. Plus it comes with a two-year warranty. The Spade hits showrooms in August 2017.

Experience: I've ridden a few mini-motos in my day...