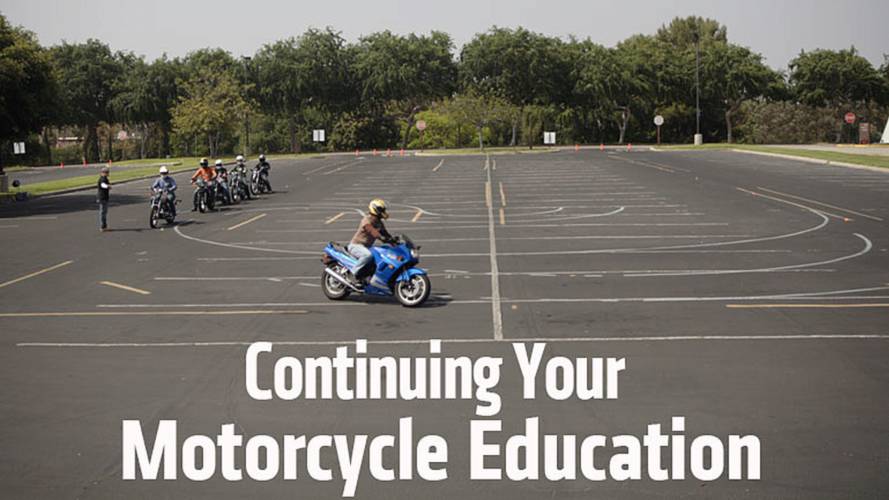 Going back to even the most basic rider courses can improve your skills by leaps and bounds. It's never too late to continue your motorcycle education.

You can never know too much or be too skilled, especially when it comes to riding

Some years ago I decided to go back to school as I felt there was a lot I could do to improve myself. I’m not talking about going to college or doing night classes to study for a business degree. Instead I felt that I really should learn some basics again about how to properly ride. This was about continuing my motorcycle education.

Over the years, since I first began to ride, I knew I had developed some pretty bad habits. The problem was that I wasn’t precisely sure what I was doing wrong and what I really needed to work on. The easiest option was for me to go out and buy some books and watch some DVDs from the comfort of home and then see where I was falling down (no pun intended).

But my wife decided she wanted to start riding too, so it was with a heavy heart I reluctantly agreed that I would join her on a Motorcycle Safety Foundation Beginner’s Course, here in Southern California. MSF offers a whole range of motorcycle instruction across the U.S. that caters to absolute beginners ready to learn the basics, also to advanced riders, who need a refresher course—like me.

My wife was a complete novice and in the interests of marital bliss and to give her some support I agreed to join her in the newbie course. I was fairly sure that it was going to be a walk in the park. I’d ridden for a long time, knew what I was doing and felt I would probably have to sit it out while the learner riders got to grips with the Buell 500s loaners, which the MSF course provided to students.

As it turned out I really am an arrogant SOB, as my wife ran circles around me and was a natural on a bike. I on the other hand caused our MSF instructor a major headache. Not only did I demonstrate to everyone else in our group how not to ride a motorcycle but ended the final day in a heap on the parking lot after dropping the Buell. There’s no fixing stupid.

But if I step back a bit I can honestly say that MSF course was one of the best and also one of the toughest things I have ever done on two wheels. There were two evenings of intensive classroom tuition to bring everyone up to speed on California road laws. This was also where they taught you all the practical things you should know when riding a bike. Simple stuff and most of which I’d forgotten or chosen to ignore. Some basic motorcycle riding theory was also thrown in and I had a hard time paying attention, as all I wanted to do was the physical stuff. Over the next two days we would be riding from 9:00am in the morning until late in the afternoon on a vast, empty parking lot under the watchful eye of our MSF instructor.

POTENTIA: Ask RideApart: The Beginner's Guide To Getting Licensed

It’s probably at the point I should describe Mac, our MSF instructor, to you. This guy was of indeterminate age, softly spoken but came across as a tough, absolute, no-nonsense USMC drill sergeant type, who had seen it all and done it all on a motorcycle. He made it very clear to all of us that he was not to be messed with. He was there to help us but if we didn’t listen he’d send us home.

What Mac said went. If you followed his instructions he’d leave you alone. If you asked sensible questions he’d give you excellent feedback and advice. If you messed about he was going to be on your back for the next two days.

Mac could also ride like nobody I’ve ever met or seen before. He’d come up every day on his bike from some obscure town in Southern California before sunrise and spent the entire day with us, instructing and demonstrating the finer points of riding. He’d answer all of our questions, explain clearly and well where he thought we were going wrong. The when we finished, he’d clean up the parking lot, park the Buells and disappear into the twilight on his bike telling us to be punctual the following day or we’d be out of his class. No argument.

Mac told me from the outset he’d have his eye on me for those two days of practical riding. We never went above 20 mph the entire time and we rode and rode until we got to the levels of competency he expected from us. There was no lea way to stop and rest – except to grab something to eat at lunch time – and Mac drove the six of us in that class hard all day, but particularly me.

At the end of two days of riding around a parking lot my brain was frazzled from concentrating and making sure I followed Mac’s instructions to the letter. My legs and arms ached as I had been in the saddle for almost a continuous eight hours. But then for some reason, which still escapes me today, I just dropped that bike on its side and lay there with the Buell on top of me, while the engine revved furiously and I stared up at a bright blue sky while lying on my back.

Mac walked across to me. Turned off the bike’s ignition and then squatted down to look me in the eye. He told me: “You really screwed that up didn’t you? You cannot afford ever to lose a moment’s concentration on a bike. Do you know why?”

I mumbled some pretty lame response. Mac in turn pulled up the right leg of his jeans and showed me a prosthetic leg. I had no idea until that point he only had one leg. I’d watched him with the rest of the class riding a motorcycle, demonstrating how to ride, better than anyone I have ever seen.

Mac got even closer to me and said: ”This is why. I was coming home late one afternoon on my bike and I wasn’t paying attention. I hit a dog at 30 mph. I lost most of my right leg. The dog didn’t do much better. You want to ride a bike? Pay attention all the time.”

The MSF beginner class was an eye-opener for me. It made me stop, revaluate the way I ride and I learned what I had been doing wrong, why I was doing it and how I could improve. I needed to keep my head up, cover the brake properly and I rode better in those two days than I have ever done in my life. That is until I dropped the Buell.

Thanks to Mac, every time I swing my leg over my bike and head off down the road I make a point of concentrating on what I am doing every single second I’m on two wheels.

I’m also considering taking the MSF’s Advanced Rider course in the near future. I’ll let you know how I get on. I’m just hoping that Mac is up to dealing with me again.

Would you ever go back and re-take your MSF training? What do you do to continue to improve your riding skills? We want to know.