My New (to me) Street Triple 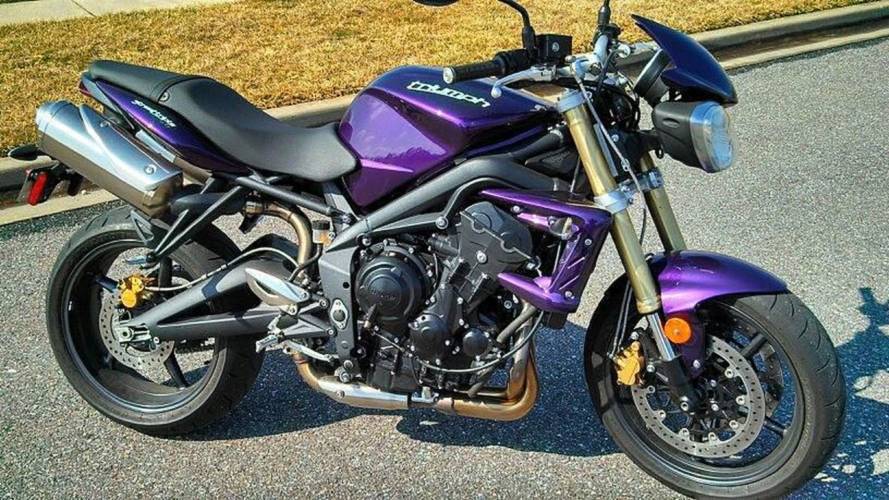 My interest in the Street Triple actually started months before I even owned a motorcycle. In 2011, I attended the International Motorcycle Show for the first time ever, with the hope that I might find some motorcycles that stood out to me. It was there that I first saw this beautiful machine.

I realize this isn't a great photo, but I'm glad I have this moment captured. Little did I realize that a year and a half later, this would become my number one financial goal.

The Day I Got the Bug

After two years of riding my Ninja 250, my moto mentor, Big Bob, suggested I give the Street Triple a try. By that point, I owned two motorcycles and had bought both after his suggestion, so his opinion carried a decent amount of weight. It helped that the bike came in a color I liked, but I’ve never been one to buy a bike only for its looks – it has to be right for me.

On a random day where I was puttering around with my motorcycle, I stopped by a dealership to check out their gear. That’s when I noticed it: a used Street Triple R. It wasn’t the color that I liked, but the salesman was quick to notice my interest and immediately asked if I wanted to test ride it. In minutes, I’d signed the necessary paperwork and was gearing up..

We rode a loop that encompassed the highway and some quiet residential streets. I will never forget the rush—it felt like the bike was just gliding across the pavement. It whisked into each turn and the power band promoted pure giggling.

The salesman asked me what I thought when we returned to the dealership, to which I managed to mutter, "Hummanna, I, wat, faljfnweaxa" and some other nonsensical words. As he laughed, I was finally able to spit out some sentences about the glass smooth engine and the phenomenal handling. In that moment, I'd made up my mind: I was getting that bike. And this was the only bike I ever wanted in a particular color, and I was hellbent on making that happen.

Why Don't You Get the R?

Every time I gushed to my friends or other motorcyclists about my desire to upgrade to the beautiful Imperial Purple Street Triple, I immediately got the response, “But why not the R? It’s way better.” To add a little clarity, the Street Triple R didn't come in phenomenal purple color that I was so hooked on. The argument followed that it would be cheaper to just buy a Street Triple R and paint it the color I wanted, but I was skeptical. I decided to do the math.

I went straight to the experts for advice on suspension—aka I talked with the RaceTech guys. I explained the dilemma I had. After they asked me about my height and weight, they settled the entire argument: Neither bike was properly set up for me. No matter what I got, I would have to upgrade the suspension to get it right for my weight.

A Need for Adventure

My first bike was a Ninja 250. Just getting the bike was an adventure - it was 200 miles away in Indianapolis. I rode two up with a friend to get the bike and we took slow back roads back to Chicago. It felt like such an epic adventure, and I wanted to repeat the experience with my new bike.

the day I got my ninja 250 - blissfully happy (don't worry, I geared up for the ride home)

I began to search for bikes that were at least 300 miles away. My boyfriend shared my enthusiasm for the adventure, and we'd made a plan to do a two-up trip to wherever I purchased the motorcycle. After calling around to several dealerships, I finally settled on a bike at Dillon Brothers Motorsports in Omaha, NE—500 miles away from my house.

I’ve never bought from a dealer, but I’ve heard plenty of horror stories. I chose this dealer because the salesman, Scott, was incredibly courteous on the phone and prompt to handle my concerns. It would be months before I could pick up the bike, but the dealership was happy to hold it for me until the weather warmed up. When he realized that I planned to ride the bike 500 miles back to Chicago, he took it very seriously, and even made a few suggestions on ways to make the bike more comfortable. I turned all of these suggestions down as I wanted to get acquainted with the bike in its stock form, but I certainly appreciated his concern.

It took forever for the weather to clear up. To make matters more complicated, I had to find time to get the bike in between two jobs and moving to a new house. Finally, on a lone non-rainy, non-cold Saturday appeared on the radar. My boyfriend and I abandoned our hopes of a two-up adventure. Instead, I bought a one-way flight to Omaha for Saturday morning. Scott picked me up from the airport, gave me a quick drive-by tour of Omaha, and then took me to the dealership.

The second I saw my bike, I screamed like a little girl, immediately turned the bike on in the building. I also interrupted the conversations of several other people while laughing my head off. This was the moment I’d waited two years for and it finally came to fruition. I couldn’t wait to take the bike home. After taking it for a test spin and a few more minutes of giggling, I toured the dealership before heading home.

If you do ever find yourself in Omaha, you should go check out this dealership. It's a three building campus, with a building for Harleys, Indians, and the last one for everything else: KTMs, Triumphs, EBRs (RIP), Suzukis, etc. It's downright impressive how many motorcycles they have shoved into once place, and they house both new and old models.

Second, this dealership’s service is truly second to none. Besides having a flawless purchasing experience of my bike, I truly believe they took great care to ensure I’d have an easy ride home. I did my typical pre-flight check before I started my trip back to Chicago: tire pressure, chain tension, oil. Much to my surprise, even the tire pressure was spot on. I commented to Scott about it, who assured me that he’d made it clear to the mechanics to have the bike prepped for the trip in addition to a few sliders I’d requested to add to the bike. After a few hours of hanging around the dealership, it was finally time to head home.

I wish I could write about some great adventure from Omaha to Chicago, but the trip goes mostly through Iowa, which is a very visually dull state, minus the above gas stations that I could giggle at. I spent most of my time being shocked at how fast the Street Triple went in comparison to my Ninja 250, and giggled at the power. I also had to pay quite a bit more attention to my speed—the bike certainly liked to go quick. In four stops and nine hours, including a half hour nap, I finally made it back to Chicago at around 10:30pm.

My initial reactions to the bike was that it was incredibly powerful, smooth, and fast. I couldn't imagine having even more powerful brakes than what already comes with the bike—the brakes were definitely going to take some time to adjust to.

Was all this trouble worth it? Hell yeah. I'm happy I did the math, I'm glad I spent two years saving, and I'm glad I finally bought the bike of my dreams. It's the prettiest bike I've owned, which is why I've already equipped it with crash bars and sliders. I'm glad I didn't take the advice of others just because the bike wasn't an R—sometimes the math says the opposite of conventional wisdom.

My next article will be about my time since I've owned this bike. That is a much longer story ...