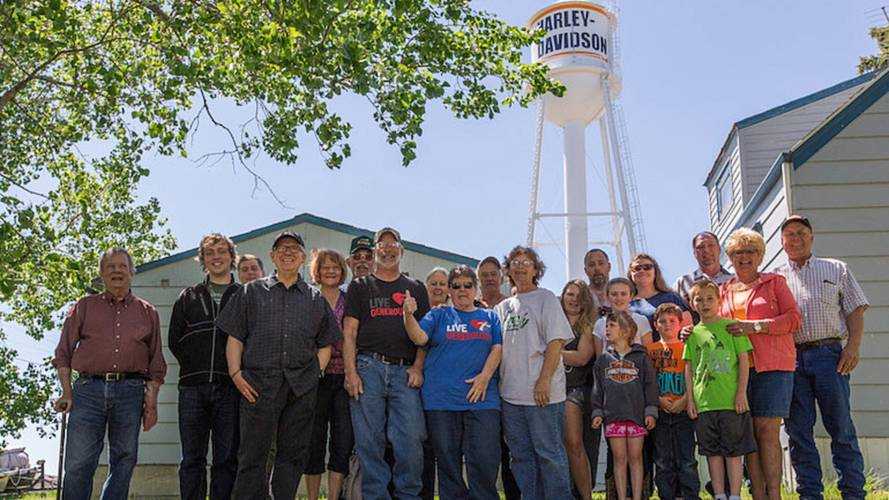 Deep in the heart of the Peace Garden State an entire town is getting ready to join the motorcycling family.

Seeking to kick riding season into high gear, Harley-Davidson has announced it will be teaching an entire town how to ride a motorcycle.

Admittedly, the North Dakota town of Ryder (See what H-D did there?) isn’t very large. The small farming community in the heart of the Peace Garden State claims just 84 residents – roughly 50 of which are eligible to ride.

“By ‘eligible’ we mean they have an active driver’s licence and can ride a bicycle,” explained US Marketing and Market Development Director Anoop Prakash.

Harley-Davidson is obviously hoping to see all those eligible learners licensed and riding by the end of the summer. If that happens, it will put the company that much closer to its stated goal of encouraging 2 million new riders in the United States over the next decade, as well as encouraging existing riders to be more active.

The mayor of Ryder falls into that latter category. Jody Reinisch was an avid motorcyclist when he was younger but “life intervened,” and he fell away from the activity. Needless to say, he’s pretty excited to see the Harley circus roll into town.

“We’re excited to see several generations of Ryder residents on motorcycles learning together, trying new life experiences and enjoying the beauty of our town and surrounding area,” Reinisch said.

Local dealership Magic City Harley-Davidson, of Minot, North Dakota, will be showing up in Ryder this weekend to show off bikes, chow down on barbecue, and sign up the residents for their beginner courses. To commemorate the event, the town has altered its name slightly to “Riders” for the summer, and the town’s water tower has been painted to mirror the one at Harley-Davidson headquarters in Milwaukee.

“I think what tipped us over the edge is that they have a beautiful water tower that is the spitting image of our water tower,” Prakash told RideApart. “It seemed like it was meant to be.”

Harley-Davidson’s Riding Academy courses function very much like Motorcycle Safety Foundation beginner courses: a two-day experience that sees riders learning skills on a “protected range” (usually a large parking lot). In most states, learners will be able to take their riding test as part of the course, thereby earning motorcycle endorsement. As with an MSF Basic Rider Course, none of the instruction takes place on public roads (Something I personally feel should be added to the curriculum), and you will need to bring your own gear.

Haven’t got the requisite riding clothes? Oh, you know Harley will help you out with that.

“That’s the nice thing about being connected with a Harley dealership,” Prakash said. “If you don’t have that gear, or are not familiar with that gear, you can meet with the experts in the store.”

Although gear isn’t provided, bikes are. The Harley course typically uses the Street 500 as its training vehicle, which, if you buy into Justin Coffey’s get-rid-of-learner-bikes philosophy, is a good idea because it is much more like the sort of motorcycle a new rider is going to buy.

“There are few skills in the world where you can think about doing something on a Wednesday and be licensed to do it on a Monday. It’s really that kind of a course,” Prakash said. “The nice thing about having a dealer involved is that it allows you to start developing engagement with the riding community, so you can continue to build your skills and find people to ride with.”

Cost of the beginner course ranges between $300 to $500, depending on the specific dealership (so, shop around!). However, up until 30 November 2017, you can do the course for just $99 if you are current, reserve, or retired military personnel, a first responder (e.g., police, fire, etc.), or the spouse of one of those individuals.

Best of luck to all the future riders of Ryder. We look forward to seeing you on the road.