Everything You Need to Know About the Bonneville Salt Flats 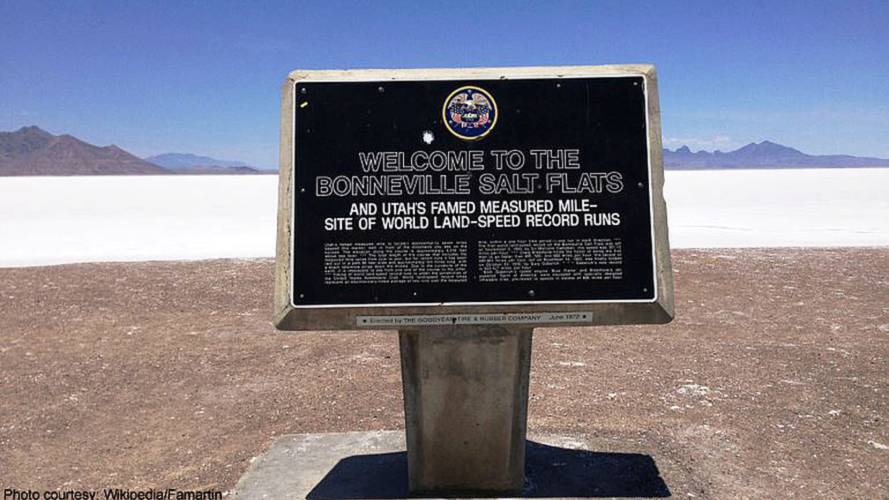 A quick primer on the Bonneville Salt Flats, every speed freak's idea of heaven.

Salt and speed, a heady combination

Despite being a desolate, lifeless desert for about 300 days a year, the Bonneville Salt Flats may be one of the most exciting places in the whole state of Utah. For more than 100 years people looking for large, flat areas in which to set speed records in cars and on bikes have flocked to Bonneville. The origin of this unique 30+ square mile area is much older though, stretching back to the Ice Age when an even greater salt lake covered most of what is now Utah.

This image from Google overhead spy satellites shows you just how much nothing is out there. The salt flats are about 125 miles west of Salt Lake City, UT, 375 miles north of Las Vegas, and 450 miles east of Lake Tahoe. The area is so salty that nothing grows there, and so arid no one wants to live there. A company harvests minerals out of the salt, about where the word Google is on the bottom of that picture, but that is about all the flats are good for besides racing. Several times a year though, this ancient lake bed is a motorsports Mecca.

(Note: I'm using pictures of bikes at El Mirage I took last month, but the same bikes run at Bonneville)

The largest sanctioning body for speed trials at Bonneville is the Southern California Timing Association - Bonneville Nationals Incorporated.The SCTA-BNI groups motorcycles into three broad categories – Unfaired, Partially Streamlined, and Streamliner. Within those categories, bikes are further separated into classes by engine displacement, naturally aspirated or forced induction, and fuel type. Displacement classes start at 50cc and go all the way past 3,000cc to the completely bonkers unlimited class.

There is a speed record for every combination of classes imaginable at Bonneville. For example, the record for 50cc, streamlined, blown, fuel motorcycle was set by NSU at 121.7 mph in 1956, a record that still stands today. Pictured above are the 500cc with Wilhelm Hertz (210 mph) and 50/100/125cc (they had 3 different motors) NSU machines with H.P. Muller. You can look at all of the current records for the BNI trials in this PDF (motorcycles start at page 22 of 40).

One of the best things about running a motorcycle at the salt flats, as opposed to a car, is that it's very accessible. If you already have the gear to road race – leathers, back protector, boots, helmet, etc. – and the bike is safety wired, you are almost ready to go. Also, like I mentioned earlier, thanks to the variety of classes available for entry there's a place for nearly any bike to run. You don't need a blown, 3,000cc, custom fabbed streamliner running on nitro to enjoy a day on the salt. Far from it. SCTA racers compete on everything, including  Ninja 500cc twins, Harley/Aermacchi 350cc singles, and 250cc Honda Rebels. If it has two wheels and a modicum of race prep work, you can run it at Bonneville.

SCTA-BNI events include Speed Week in August and the World Finals in October, with the earlier event usually drawing more entries. In September the more laid back annual Utah Salt Flats Racing Association World of Speed takes place, with similar rules and classifications to the SCTA. Also in August is the motorcycle only Bonneville Motorcycle Speed Trials, formerly the Bub motorcycle speed trials. If you just happen to be passing through, you can even stop and drive/ride onto the flats – it's federal Bureau of Land Management land – to experience the weirdness of the place.

Know Before You Go

People who have been to an event at Bonneville will tell you it only takes once to get infected with salt fever. There is no known cure or treatment, and the only way to alleviate the symptoms is to go racing. Jack Costella first went to Bonneville in 1969 to set some records with Bonanza minibikes, both a naked 100cc bike on alcohol at 79.7 mph and a partially streamlined 175cc gas bike at 92.5 mph. Years later he started building insanely tiny streamlined "sidecar" – there is a third outrigger wheel on one side – motorcycles powered by various size motors, and now riders are going close to 260 mph in his canoe sized "Nebulous Theorem VIII".