Concussions, And What You're Wrong About 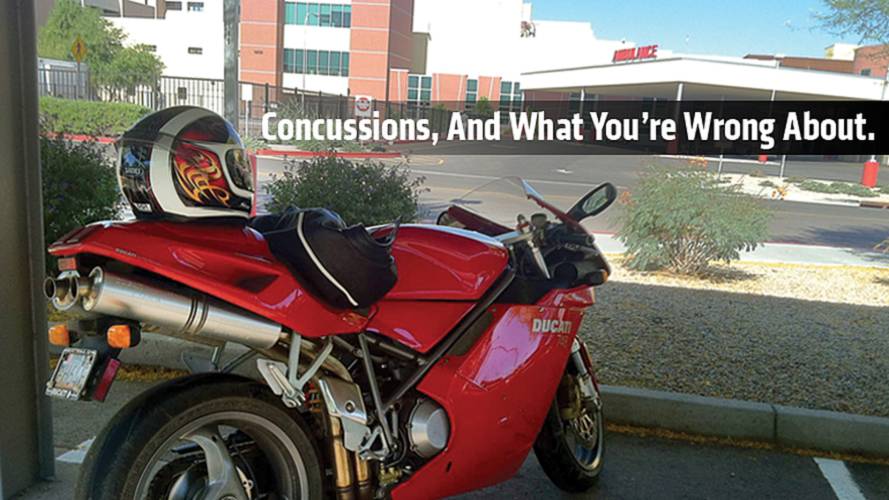 Concussions are often the most misunderstood injury to riders and athletes around the globe. RideApart breaks down what people are doing wrong about concussions.

Concussions have received a lot of attention in the media lately, and those of us who ride motorcycles are no stranger to this form of mild traumatic brain injury. All of us have known someone who’s injured themselves this way (or worse) while riding, and since March is National Brain Injury Awareness Month, I thought now would be a good time to debunk some common misinformation riders share about the most common form of mild traumatic brain injury.

Though you may be familiar with my dazzling wit and bike-related candor as a writer, my day-gig is in medicine. Mild-mannered neuroscience nurse practitioner with a doctoral degree and clinical residency in neurosurgery from Columbia University by day...female moto-journalist by night. I’ve also experienced the joy of a concussion firsthand, after being rear-ended by a guy who was reaching down for his cell phone when he plowed into the back of me on the freeway in 2011. Totaling my car and kicking me to my couch for two months.

Seriously. This is stuff I know. And since I know what a discriminating readership we have, I’ve provided you with the best, not-wikipedia-references I could find.

The CT scan was negative, so you’re good.

When it comes to CT scans (or any other diagnostic medical imaging), no news is good news, but guess what: concussions don’t show up on a CT scan, or any other routine imaging studies(1). A concussion is not a radiographic diagnosis. “Woah; get a load of this concussion!” – said no radiologist ever.

The diagnosis of concussion is a clinical one, meaning it’s based on observed signs and symptoms after a known mechanism of injury. Tests like CTs and MRIs are ordered to make sure there’s not a more serious injury, like a hemorrhage or diffuse axonal injury. Normal findings do not rule out the presence of concussion.

Interestingly, the radiologist who read my own CT dictated the specific phrase, “No evidence of concussion”.

“Like what?” I asked opposing counsel, when he asked me about the radiologist’s report at my deposition. It did not come up again.

Your head never actually hit anything, so you can’t have a concussion.

Wrong! Though the most common cause of any brain injury is a physical blow to the head, a concussion (or worse) can happen when it just gets bounced around in the skull too hard. Think about that time you bought that tropical fish at the pet store. They put it in a plastic bag full of water, tied a knot in it, and you put it on the front seat of your car. You got home, reached for the bag, and there was your fish, floating upside down and lifeless. Why? You jiggled it to death. The same thing can happen to your brain as it floats around in a cushion of fluid in your skull. Sudden changes in acceleration and deceleration, like whiplash or being thrown from side to side on a roller coaster, can slam your gray matter against one side of the skull and back to the other. Blast waves are another common cause of jiggling that thing around to the point of injury. Just because your head doesn’t hit the ground, doesn’t mean it can’t get hurt.

Continue Reading: Concussions, And What You're Wrong About>>

If you didn’t lose consciousness, you probably don’t have a concussion.

Wrong again. Concussions can occur with or without conking out (2). You might feel nothing more than an adrenaline hangover and a bit of a headache once you dust yourself off. But if your brain is concussed, symptoms are likely to start popping up over the course of hours, days or even weeks.

(Note: the presence of brain injury of any kind is greatly increased if loss of consciousness does occur, and the longer you’re out, the higher the risk and severity of injury).

As long as you feel ok, you probably are ok.

Hmm...define ‘ok’. Symptoms of concussion can be physical, cognitive, emotional, or sleep-related, and you can pretty much throw a dart at any of those categories and hit a symptom attributable to brain injury. Symptoms can also be any shade of subtle. You may feel fine physically, but be irritable as hell. Or depressed, can’t sleep or can’t concentrate.

A couple weeks after my concussion, I found myself staring at the directions on the back of a box of instant mashed potatoes and being stumped after “in a large bowl...”. My headaches and dizziness were improving, but clearly, I wasn’t “ok”. Someone who can’t follow two-step directions to make instant mashed potatoes should not be examining sick people and prescribing medications.

Or riding motorcycles. It was nine weeks before I felt “ok” enough to return to work, and I stayed off my bike for twelve. When it comes to brain injuries, 1+1=5. Re-injuring an already injured brain can have devastating consequences, and it doesn’t take much. This is called second-impact syndrome, and it can kill you (3). Or worse.

The length of time it takes to heal from a concussion is complicated and controversial, so the discussion about when it’s ok to get back on your bike is one you should be having with your neurologist or neurosurgeon, not with me or with other riders on some forum somewhere. I will tell you that when people like me who know what I know get a concussion, they take healing very, very seriously.

A good helmet will prevent a concussion.

Maybe, maybe not. If you do sustain a concussion while wearing a helmet, consider yourself lucky; you can be damn sure it prevented something worse.

(1) Although there are subtle changes that may be observed in specific sequences of a diffusion-weighted MRI scan, there currently exists no known biologic markers for concussion. .