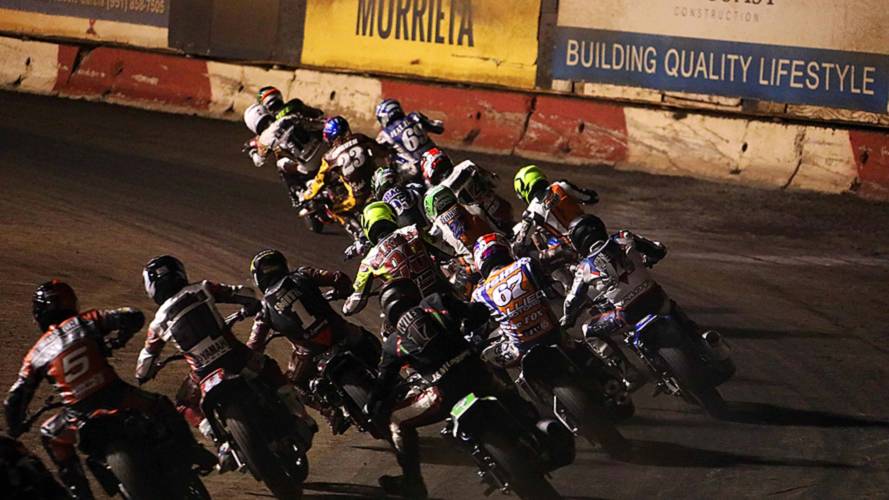 The final of the 2017 American Flat Track season had a predictable end but an unpredictable finish.

Indian go into event having already won the season, which may be reason for a more interesting final race

Last season’s American Flat Track finale (known at the time as AMA Pro Flat Track) was down to the last corner of the last lap. Bryan Smith, the racer’s racer, had fought long and hard to be named a champion. Achieving a boyhood dream, he’d finished in a close second for years before finally nabbing the No. 1 plate. While multi-time champion Jared Mees was beating down the back door. The 2016 season finale – the Santa Rosa Mile – was an exciting race to watch. This year however, the top three championship finishes were determined before the trucks even loaded up for California.

The 2017 season saw the finale held for the first time in Southern California, at the Perris Auto Speedway, amid the revelry of the Southern California Fair. The glow of spinning Ferris wheels reflected off the dirt, and the smells of fried dough and chicken legs mixed with that of race fuel. It was Saturday night racing that reminded one of the old days of banging bars.

The air was calm as night fell over the track. It felt historic. That's something you rarely experience: knowing you’re witnessing the history of a sport while in it.

Or, at least, that’s what I thought while there. But after the heartburn of funnel cakes wore off I began to wonder if it really was history in the making. Was this season more exciting than last year's? Were the story lines of the Indian Wrecking Crew’s triumphant return to the sport really as impactful as the press releases would want you to think?

Earlier this season Indian backed its trucks into the Daytona Speedway and unloaded bundles of cash. Now, 18 races later, it’s no surprise the manufacturer's star-studded team walked away with the top three spots.

Still, the final twins main race was the best representation of the season. An Indian piloted by Jared Mees jumped out front and began to walk away from the field after a mid-race restart. Three quarters done, Mees was leaving a corner as the field, stacked in single file, entered said corner. The racing from second on back was exciting to watch, but Mees' riding style was something to behold – fine art suitable for framing.

Fighting for his spot at the show was Johnny Lewis: the professor who has taught the majority of those in the AFT singles field, as well as those whose bars he was currently banging against.

As in much of racing, it always means more when you know the riders. Lewis is a young, handsome, charismatic guy with an equally attractive young family. He’s the exciting entry in the field, the only privateer on a Indian FTR750. In his first showing, he podiumed with a third place finish behind Mees – a major accomplishment. The bike comes from the money man behind one of Lewis’ student riders.

The Indian Wrecking Crew arrived in the center of the pits with two large outfitted, branded, catered, and equipped 18-wheeler trailers. Across from them, Lewis and his team had set up shop in a decade-old Toyota Four Runner hauling a single-axle enclosed trailer (which was smaller than a typical U-Haul enclosed trailer). But being a privateer isn’t so bad. According to Lewis, although there hasn’t been any financial assistance Indian has been helping out his team with some advice and some items, like branded tents.

A little over halfway through the final race, Lewis lost his battle with Briar Bauman – the aggressor – and shot wide entering Turn 2. That sent him tumbling a few spots to a 6th place finish. This clash shifted the field and allowed privateer hero Jeffrey Carver Jr. in contention to finish second.

That was the uncharacteristic part of the race – other than the venue: the podium guys. Indian's swept the podium so many times this season it was almost strange to see only one of the team (Mees) up there – as well as bikes other than the FTR750 represented. Carver had come second on a Harley-Davidson XG750, and JD Beach, a MotoAmerica racer, took third on a Yamaha FZ-07.

Beach made a last-lap aggressive pass to get his spot on the podium.

"I screwed up my start," Beach said. "I started in second. I took off and got nervous and shifted down to first and then back up to third. I was all over the place. Still, I was running in sixth and thought that wasn't too bad for my first national in a while. Then the guys got to battling, and I was fifth and then I was fourth, and Bonsey was right there in the last turn for third. I felt bad, but the door was open and I just had to go for it."

It's been rare to see any brand other than Indian on the podium this year, so did that inherently make the racing less boring? Feel free to debate that one.

Meanwhile, in the AFT Singles, female rider and fan favorite Shana Texter fought hard for her shot at being the first female to win an AFT championship. Diving into the first corner of the first lap, she ran outside to points leader Kolby Carlile, as they continued second and third for a few laps when a downed rider caused a restart. This restart was a mirror image of the start. Texter needed to win the race and Carlile needed to make some major mistakes for her to take the crown.

It wasn't to be. Carlile walked away with a third-place finish – and surprisingly not a single win this season – but that was enough to nab the ultimate championship win. Texter finished out with a fifth place.

Despite my not knowing whether this season was as entertaining as the last, it was still history in the making. I talked with Mees earlier this year and he mentioned his desire to etch his name in as many record books as possible this season. He's certainly done that: the first to win on an Indian in a long time, first to win on a TT, the first champion, and now with his season's finale win, Mees has established the new single-season podium record, surpassing the previous mark held jointly by flat track icons Scott Parker and Ricky Graham. Mees ended the year with 17 top threes in 18 attempts – 10 came as victories, six were runner-ups, and just one was a third.

Another major element of the season was the running of the SuperHooligan series. A series made up of mostly street bikes running the same night as the pros.

AFT Singles main event - to see exciting racing, look back in the field.

Lewis was giving the leader pressure early on in the race, but it was short lived.