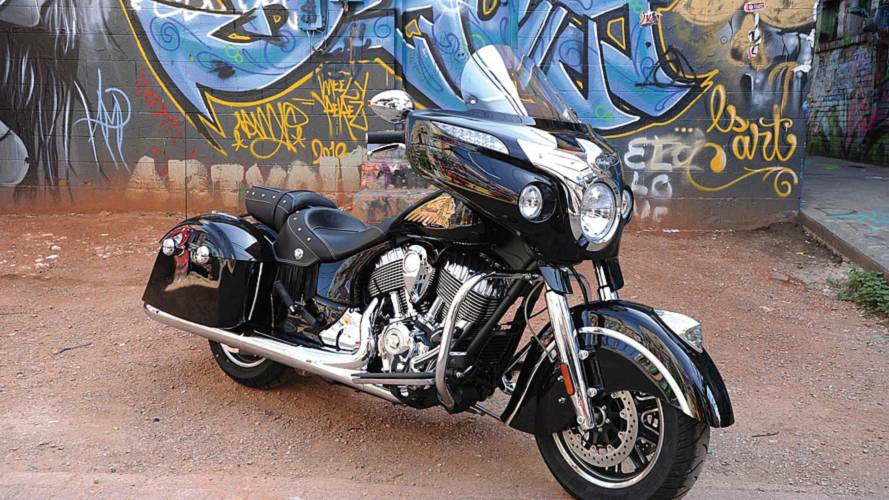 The 2014 Indian Chieftain is the first large touring motorcycle from the "new Indian." See how it stacks up.

Indian Motorcycles, the brand that wouldn't die, is finally back with a new lineup of bikes: The Chief Classic; Chief Vintage; and Chieftain. RideApart had the chance to spend some time with the 2014 Indian Chieftain, the first bike with hard bags and fork-mounted fairing officially produced from an Indian factory.

A quick round-up of Indian history, in case you haven't been paying attention. Indian Motocycles (the "r" was added later) was founded in Springfield, Massachusetts (as Hendee Manufacturing Company) in 1901, predating Harley-Davidson by two years. For the first several decades of the 20th Century, Indian was arguably Harley's chief rival on the road and on the race track. World War II dealt a blow to Indian production, and the company never fully recovered, going out of business in 1953. Many bikes wore the Indian brand in the decades that followed, with several abortive attempts to resuscitate the company through the end of the century. A serious run at building new Indians emerged in 1999 in Gilroy, California by the Indian Motorcycle Company of America, but they expired in 2003 after building a lineup of Harley clones with S&S engines and Indian styling. British capital firm Stellican Limited bought the rights to Indian and produced bikes in Kings Mountain, North Carolina beginning in 2006, eventually bringing out an expensive bike with a proprietary engine, the Powerplus, which had been on the drawing boards in Gilroy. In 2011, powersports giant Polaris bought Indian and relocated production to Spirit Lake, Iowa, where it also produces Victory brand bikes. After completing the run of Kings Mountain bikes with existing parts, Indian retooled for new production of 2014 models.

The new Indians are truly all-new, sharing no parts with the Kings Mountain bikes, and only nuts and bolts with Victory motorcycles.

The Chieftain is a touring motorcycle, sized and priced to match up with the Harley-Davidson Electra Glide. The new bike looks the part, with deeply valanced front and rear fenders, and a fork-mounted batwing front fairing. The big 111 cu.-in. Thunder Stroke engine acts as a visual anchor and a stressed member in the cast aluminum frame. Even a casual observer will have no problem differentiating the Chieftain from a Harley-Davidson - especially if they can read. A big Indian headdress is painted on each side of the gas tank, and the Indian head ornament dresses the front fender, lit from within for visibility after dark.

Fit and finish on my test bike, a late pre-production example in Springfield Blue, was superb. I'd expect production bikes to be even better.

This is a great-looking bike with fantastic presence, a great blending of Indian heritage with modern technology and bike design.

There's no physical ignition key, just a proximity key fob with two buttons: Lock and unlock, controlling the power locks on the hard bags. There's an ignition cut-out tied in to the sidestand so you can't ride off in gear with the sidestand deployed.

Chieftain's instrument panel lives within the fairing, surrounded by a chromed bezel. An LCD rider information screen is flanked by two white-faced analog gauges: Speedometer on left, tachometer/gas gauge on right. Idiot lights - I mean "warning lights" - show up out of the blackness of the panel. The rider information screen covers a wide range of information, including a very useful gear indicator at the bottom of the window.

The fairing houses the technology hub. There's Bluetooth built right in, so you can link your cellphone or MP3 player to the bike wirelessly. There's also a semi-concealed storage compartment beneath the right wing of the batwing, complete with a USB connection and a padded pocket that will hold a smartphone, and there's even a 12-volt socket on the dash. The windshield is electrically adjustable via a switch on the left hand control cluster. Audio quality is excellent, loud and clear enough to be heard even at highway speeds.

A few small complaints: At certain times of the day, it was impossible to read the settings in the rider information screen due to glare and reflection. I didn't love the look of the international graphics on the accessory driving light switch and the power switch, both of which are quite prominent in view at all times. Also, a blank switch space on the tank, reserved for add-on heated grips, is a bit of an eyesore.

Clutch pull is reasonable, but a little heavy for smaller hands. The transmission is nice and solid. My test bike was a little stiff shifting when it was cold. Engine and transmission share a bathtub, so when the engine warms up, so does the transmission.

The Thunder Stroke 111 sounds great. The sound comes up to the rider from all around, the intake is on the left side. Throttle control is by wire, not by mechanical cable, though you'd never know it in operation. Indian doesn't reveal horsepower figures. The claimed 119.2 lb.-ft. of torque comes on nice and low, hitting its peak at 3,000 rpm. The punch is available when you need it, with serious acceleration on tap in pretty much every gear. This engine goes as good as it looks.

Handling is very good for a bagger. I matched up my weight with the suggested air pressure before riding, adjusted the rear shock with the provided hand pump, and never felt the need to adjust it again. Because of a comfortably steep rake (25 degrees) and trail, the Chieftain feels stable at speed, while still maintaining relatively quick steering. There's plenty of lean angle available for most riders, though aggressive riders should be careful - the floorboards are solidly-mounted, not hinged. When hard parts scrape, they really scrape, and leaning farther could lever the bike off the pavement in certain situations. You have been warned, show-offs.

Dual disc brakes on the front and a single rotor on the rear provide ample stopping power. Brake lines are steel braided. Non-linked ABS is standard, front and rear.

• Transmission can be clunky until warm

• No top box available yet

• Too much heat under your right thigh, could make for uncomfortable riding in traffic during hot weather 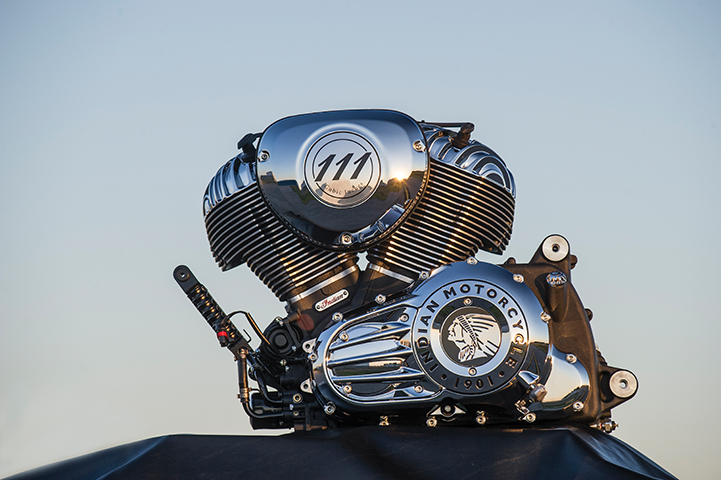 Indian may actually be in the right hands after six decades of uncertainty. The 2014 Chieftain is a fantastic motorcycle, a worthy competitor to the Harley-Davidson Electra Glide. Anyone who is considering a V-twin touring bike purchase must sample the Chieftain before making a decision. It may come down to a matter of taste - you might be a Harley fan, or you might be an Indian enthusiast. Finally, you've actually got a choice, and it won't be an easy one.

Are you a Harley person, or an Indian person? Does the new Chieftain meet your expectations - or are you still waiting for the brand to prove itself?

Chief: What The New Chief Means For Indian

Indian: Time To Be Optimistic About American Motorcycles?