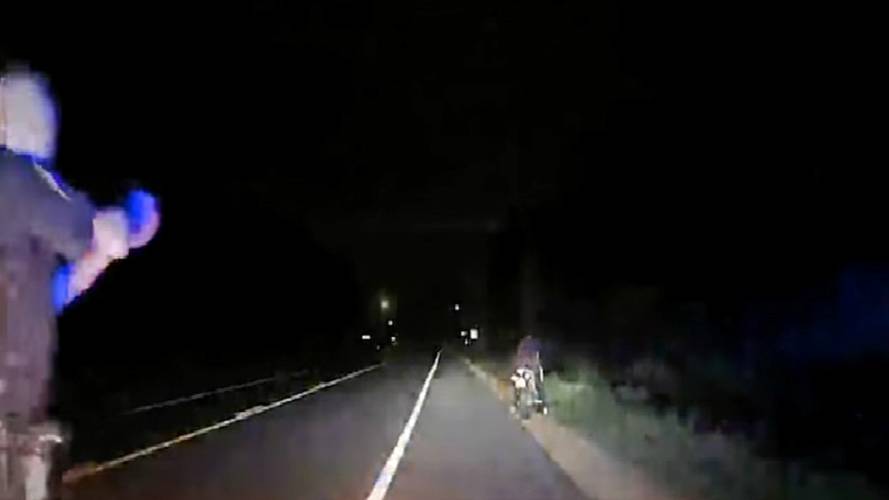 Footage has surfaced of a Minnesota police officer accidentally shooting a motorcyclist after stopping him for speeding. And what follows is one of the most Minnesota situation ever.

The shooting took place last June in the Twin Cities suburb of Eden Prairie, but video of the incident was only recently uncovered by local television station KMSP. In the video, Eden Prairie Police Sgt. Lonnie Soppeland pursues 21-year-old motorcyclist Matthew Hovland-Knase at speeds reportedly in excess of 100 mph. Eventually, the latter slows his motorcycle and pulls into the dirt shoulder of the road.

Soppeland quickly steps out of his patrol car, and in the process of shouting, "Get your hands where I can see him," fires a shot that hits Hovland-Knase in the arm.

In the unedited version of the video, Soppeland can be heard hissing, "Oh, sh*t. F*ck. F*ck," in much the same tone one might use after spilling really hot coffee into one's lap.

Instantly, the scene takes on the dark comedy of a Coen brothers film. Hovland-Knase, still on the bike, yelps in pain and Soppeland's Minnesota accent becomes more pronounced. The two manage to get the bike's kickstand down and Hovland-Knase takes a seat by the roadside while Soppeland jogs to his car for a first aid kit.

"Yah," Soppeland mutters. "You know, it was not intentional."

Officer Soppeland, an eleven-year veteran of the force, clearly struggles with remorse, saying almost to himself: "But you ran, man. You were tryin'. But I mean that's not...that still doesn't excuse my actions."

When support officers arrive a few seconds later, Soppeland informs them of the situation by sighing: "He was shot in the arm. By me."

In the investigation that followed, Soppeland blamed his actions on muscle memory developed as a result of firearms training he had undertaken less than a month before the incident.

"It was not my conscious choice," Soppeland told investigators. "I feel the muscle memory from that recent training of squeezing the trigger contributed to the unintentional discharge during a high-stress situation."

Soppeland was placed on administrative leave during the investigation. No further disciplinary action was taken as a result, and he has since returned to active duty.

Hovland-Knase, meanwhile, was convicted of fleeing a peace officer in a motor vehicle. He was sentenced to five days of community service and 15 days house arrest.

During my teenage years I lived in Bloomington, Minnesota, the city immediately east of Eden Prairie. And every speeding ticket I earned from age 16 to 22 was issued by the Eden Prairie Police Department. My brother, mother and father have also picked up speeding tickets there, as have just about every one of my friends from school.

The reason EPPD are so ticket happy is that they have nothing else to do. The city is idyllically low-crime. Over the past 15 years, just three murders have taken place, and the rates for assault are equally low. Your chances of becoming a victim of violent crime in Eden Prairie are just 1 in 2,874. Compare that with the relatively safe city of San Diego, California, where your chances are 1 in 253.

So, although Hovland-Knase was riding erratically at 3am, I would argue there was very little precedent to vindicate Soppeland's immediate drawing of his gun. Fortunately, his aim wasn't great, but the Eden Prairie Police Department needs to seriously reconsider how it trains its officers in terms of when to draw their weapons.

This surreally humorous blunder could have been a tragedy that not only would have devastated Hovland-Knase's friends and family, but almost certainly had a deep and terrible psychological effect on Soppeland. Riding a motorcycle like a jackass should not be a crime punishable by death.