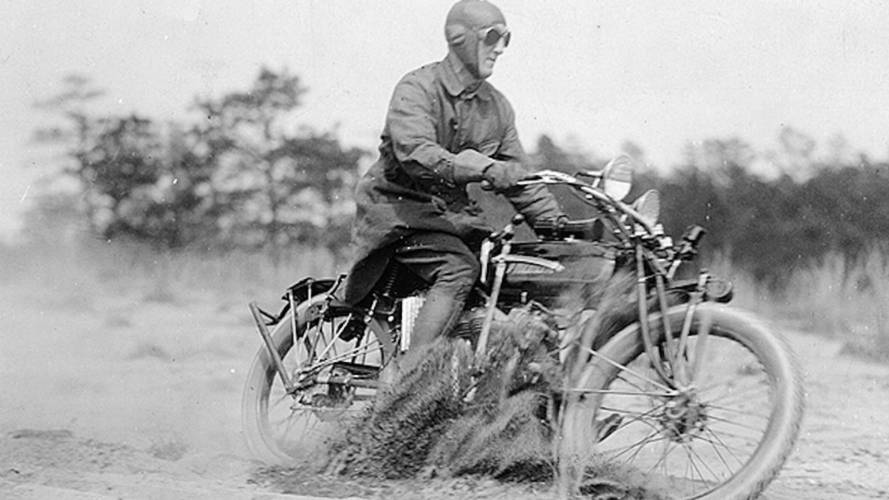 Cannonball Baker is an absolute legend in the history of motorcycling; he's effectively the man who created endurance riding.

Though, it wasn't the easiest of gigs when he was doing it more than 100 years ago. His first jaunt in 1912 was a 14,000-mile ride to South America. Roughly, two years later, he set a record for cross-country travel by speeding from San Diego to New York City in just 11 days.

MUST READ:  Vintage Motorcycle Racing on the Beach - The Race of Gentlemen 2014 | RideApart

That might not sound impressive within a modern context, but keep in mind this was decades before the U.S. broke ground on the Interstate system. The Lincoln Highway hadn't even been established. Remember playing Oregon Trail as a kid? Traveling in 1914 was a lot more like that. In fact, five years after Baker's feat, it took the U.S Army 56 days to move a convoy of trucks from Washington, DC to San Francisco (Google the 1919 Motor Transport Company convoy).

Not to mention the technology of the day. Baker made his run on a stock two-speed Indian, which produced a mind-ripping 7 hp. Brakes were literally wooden. Baker's only modifications were thicker tires and a homemade bash plate.

Cannonball Baker suffered hallucinations in the desert, and in some sections he had to ride on railroad tracks. Muddy roads in Ohio and Pennsylvania were almost impassable, but he made it. People lined the streets and cheered when he rode through town and some towns even scrapped their speed limits just for him to be able to get through in good time.

After the 1914 run he made several other record-setting distance runs –– on motorcycles and in cars. Later in life, he became national commissioner for NASCAR. He died in 1960, at the age of 78.

Fifty years after his death, a group of nutball vintage motorcycle enthusiasts decided to put together a race in Baker's honor and prove that their classic bikes were more than just museum pieces. This is how the Motorcycle Cannonball Endurance Run was born.

The route varies from year to year, but the basic rules remain the same: To travel from one end of America to the other on old bikes. The run takes place in stages, with competitors riding about 300 miles a day for 17 days (well, 16 days and one rest day). Considering the top speeds of vintage motorcycles, covering such distances means putting in long hours in the saddle. Click through the blogs of riders who have done it, and you're struck by the fact that keeping their old bikes running is often a lesser concern than the challenge of sticking to the run's schedule.

MUST READ:  Race Vintage Motocross for $1000 – Yes, Including the Bike | RideApart

Last year, RideApart highlighted a film about Motorcycle Cannonball riders. Sure, they have some modern advantages, like support trucks, paved roads, GPS, and air-conditioned hotels, but it's still a tremendous challenge. And next year, it's set to get even harder.

In past years, the run defined a vintage motorcycle as one manufactured before 1937. But next year it will only allow bikes that are 100 years old or older, i.e., bikes from 1916 or before.

If you've been riding for any amount of time you've probably toyed with the idea of taking on an Iron Butt challenge. But the difficulties these riders will face is completely different than debating the merits of bar risers or sheepskin seat covers. For a sense of it, you need only look at this advice offered on the official Motorcycle Cannonball website: "If in any way you can improve your braking ability, to the point of even adding a front brake, then it is highly recommended."

Yeah, brakes are nice. If it's not too inconvenient you might want some. But, you know, whatever.

The official site has a certain quality to it that appropriately suggests it's run by people who haven't fully embraced the current century, but if you take the time to wade through you can find some fascinating stories of people who will be taking part. You'll also get a sense of just how much a challenge some of them face to even make it to the starting line. The picture below is of the 1914 V-twin J.A.P. that entrant Chris Knoop plans to ride. As you can see, it needs a little work...

MUST READ:  Racing For Everyone: The AHRMA | RideApart