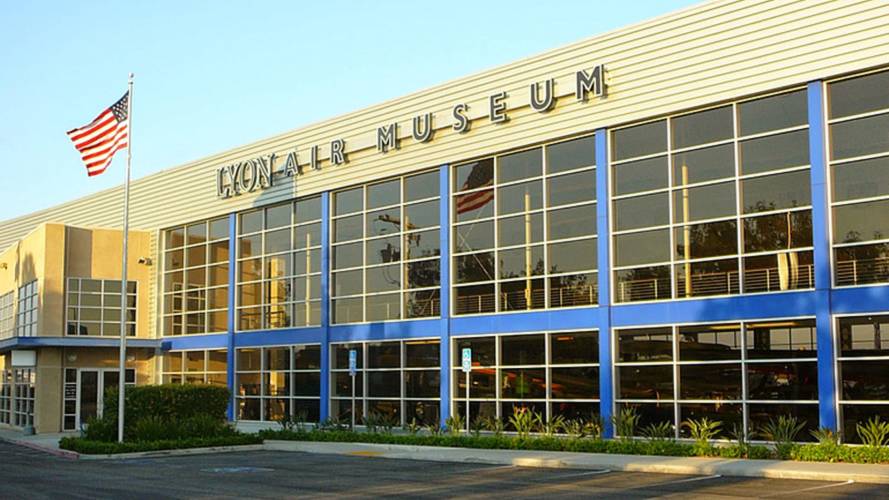 There are some amazing vintage bikes parked among the aircraft at the Lyon Air Museum in Santa Ana, California. Check out these old-school machines!

Wherein I go to the air museum to look at motorbikes

Housed inside of a hangar on the outskirts of John Wayne Airport in Santa Ana, California, is the Lyon Air Museum. The museum features a truly impressive collection of vehicles, most of which are military models from the World War 1 and World War 2 eras. The museum's collection runs from cars and trucks to motorcycles to iconic World War 2 aircraft like the B-17, A-26, B-25, and C-47. It also houses a solid collection of historical military memorabilia. When recently attending the press launch for the new 2018 Yamaha Star Venture that was held at the museum I got to check out and photograph some of the interesting bikes the museum has on display. Almost every vehicle on display, including the aircraft, is in full working order as you can tell by the drip pans sitting beneath engines collecting oil.

Motorcycles have a roughly century-long history of military service. While they had been used in limited numbers since the early part of the twentieth century, WW1 was the first time motorcycles would be used on a mass-scale, with tens of thousands of bikes being ordered by US forces. While riding a motorcycle in a combat-zone may sound like a really sketchy endeavor, with the rider being entirely exposed to enemy fire and environmental hazards, motorcycles were often the best option for specific applications such as reconnaissance or delivering sensitive and vital intel or supplies over terrain cars couldn’t traverse. The use of sidecars was also big in military motorcycles, allowing motorcycles to deliver ammo and supplies or to cart wounded personal out on sidecar-mounted stretchers. WW2 didn’t see motorcycles used directly in combat in the way they were in WW1, but bikes still played a large role in the war and were widely used by both sides.

Another interesting role these motorcycles would play in the ongoing history of two-wheelers is the effect they had on motorcycle culture, especially after WW2. At the end of WW2, the U.S. military had tens-of-thousands of bikes left in their inventory, particularly WLAs and XAs from Harley-Davidson and Indian 340B Chiefs. They were declared surplus, and the military sold them at low prices to get them out of motor pools and depots. Many of these old war horses were sold to the very soldiers who used them while serving. Obviously there was no need for things like riffle scabbards, ammo boxes, or radio mounts on civilian bikes when stateside. As a result, the new owners of these bikes would chop off various parts that were no longer needed which led eventually to the chopper scene in the 50s and 60s. There are obviously many additional factors that helped the chopper-movement along, but the abundance of demobbed two-wheelers undoubtedly played their part.

My time at the museum was limited, and not every motorcycle was accompanied by a sign listing the bike’s make and model. Some did though, along with background info and specs while others just said the year, make, and model. Because you’re reading this, I assume you’re here for motorcycle related content so I won’t get into the rest of the seriously cool vehicles at museum. If you're ever in southern California though, the Lyon Air Museum is definitely worth the trip.

The R75 was a drastic improvement over the older R71 model that BMW produced from 1938 to 1941. In production from 1941 to 1946, the robust R75 featured a 750cc overhead valve air-cooled boxer engine that formed the basis for BMW's post-war engines like the R51/3 and R68. The R75 boxer was mated to a stout four-speed transmission with a reverse gear. These sidecar-equipped R75s had a powered third wheel and were equipped with a locking rear differential and selectable on-road/off-road gear ratios that allowed the bike to go nearly anywhere over any surface.

This WW2-era Japanese motorcycle was originally built under the license and name of Harley-Davidson, but the second-World-War put that to an end once hostilities broke out. Production of these bikes then continued under the Rikuo name, which roughly translates as "Land King" or "Continent King". These bikes were powered by a 74-CI V-twin engine and featured 4 gears, 3 forward and 1 reverse. Rikuo continued making bikes well into the 50s, with the same flathead motor, and they were the spitting image of the big, long-legged Harley FL bikes being produced on the other side of the pond.

Not all of the vehicles found at the Lyon Air Museum are military-models. Several motorcycles in their collection of the civilian variety were previously owned by the famous Steve McQueen, including this beautiful 1921 Harley. This one is either a JS or JDS, built specifically to carry a sidecar and equipped with sidecar-specific gearing in the transmission.

This Great-Depression-era bicycle is the only two-wheeler at the museum that lacks an engine, but it is nonetheless an US-military vehicle.

A licensed copy of the BMW R71, the M-72 was produced in Russia starting in 1940 with design, tooling, and training for manufacture provided by BMW. Three factories produced the M-72 – IMZ/MMZ, KMZ, and GMZ – and production continued into the late 50s when all the tooling and machinery were sold to China to produce the ChiangJang 750. These bikes are still produced today in China, giving the model probably the longest production life – 1938 to the present – of any vehicle ever madeNearly all M-72s were equipped with sidecars, although a handful of solos were produced for scout and escort duties. I'm not a hundred percent sure what year this one is or what factory it came from since there was no sign on it. Today, the IMZ plant that produced the M-72 is called IMZ-Ural and produces a number of fine motorcycles.

The Kettenkrad is a strange beast, neither fish nor fowl but made of both as it were. Starting production in 1939, tt was initially designed to be deployed with Wermacht airborne troops, this bike-tank hybrid ended up pulling numerous wartime duties. It could carry troops, act as an engineer vehicle or scout, pull heavy loads and artillery, and was even used as an aircraft tug. After the war, a handful were made for agricultural use. Production officially ceased in 1948.

Indian Motorcycle's 340B was a military version of Indian's famous Chief. Essentially a civilian model Chief dressed up to play army – blackout lights, OD paint job, etc. – the 340B was used by the United States army and exported to France, Canada, and Great Britain. It had Indian's 74 cubic inch flathead v-twin mated to a three-speed, hand-shifted transmission and many were equipped with sidecars. Fewer than 10,000 340Bs were produced, somewhere between 5,000 and 8,000 bikes depending on who you ask, and they're vanishingly rare today.

No information on this one sadly, but as the tank says it's a Zundapp. It's either a KS600 or a very early KS750, probably a KS600 though due to the shape of the cylinders. I have no idea what year it was made, but this one is painted up like a member of the German Army's Afrikakorps. Whatever it is, it's pretty cool.

Despite my not knowing the exact year or model of this gorgeous Indian motorcycle, (perhaps a reader more knowledgeable than myself can clarify in the comments section below), it’s nonetheless my favorite motorcycle on display at the Santa Ana museum.

The BMW R75 saw a lot of action during WW2 even though it didn’t go into production into 1944. I personally like how the hand-levers are attached to the outside of the handlebar.

This 1931 Panther boasts some features that were pretty-trick for the bike’s time, such as a sidecar that looks for all the world like it was made by Chris-Craft. Like the mint '21 Harley above, this luxurious motorcycle once belonged to the great Steve McQueen.