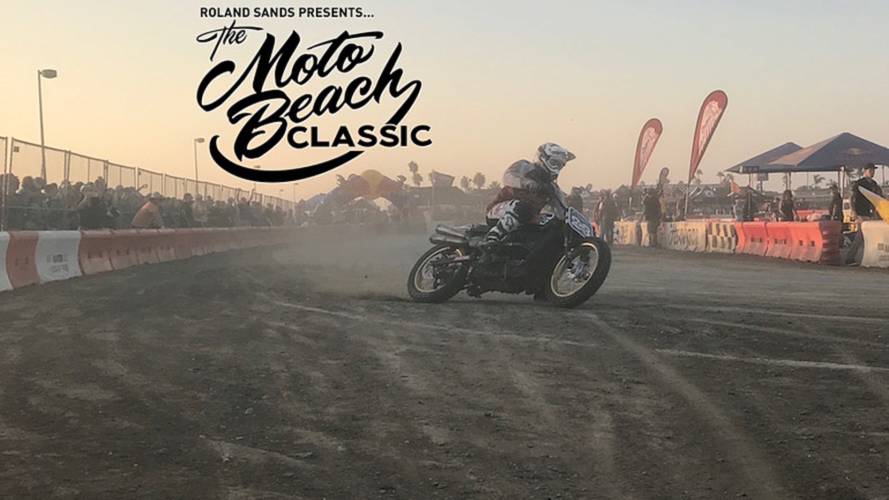 The all-day event was jam-packed with racing, music, art, and an impressive collection of customs and flat trackers.

All-day event jam-packed with racing, music, art, and most impressive collection of customs I’ve ever seen

Metal adorning the bottom of flat-track racers’ left boots click-clacked against the asphalt with every other step as they walked through a maze of pits set up in what had only hours before been an empty beachside parking lot. Everything happening beneath the cluster of canopies was a symphony for the senses. The click-clacking of the racers’ boots was accompanied by a sea of talking and the idling of a diverse variety of engines, creating vibrations that ran up my legs – while the aroma burning of race-fuel filled the air. This sensory overload was being provided by the pit area of the first Moto Beach Classic – an "intersection" of surf, skate and motorcycle culture dreamed up by motorcycling wünderkind Roland Sands.

Not only was the variety of bikes immense - modern flat-trackers, to motocrossers, to vintage hand-shifted Harleys and Indians, even a Ducati Multistrada - but almost every race-prepped bike was unique, and the majority had received a fair amount of cosmetic work.

A metal slider on the bottom of a race boot

Roland Sands' Moto Beach Classic's venue was right on the beach, with the event space running for more than half a mile between the ocean and the Pacific Coast Highway. The festivities kicked off bright and early with a Surf Contest at 8 a.m. (admittedly, I did not attend). Doors opened for the main festivities at 11 a.m. and hordes of people began rolling in. There were some support events, such as the Law Tiger’s Mini Moto and the Fast Surfboards Surf Drags. Each competition included a practice to allow competitors to warm up, make adjustments, and dial in their machines. A stunt rider duo on new Kawasaki ZX-6Rs performed four times during the event – in between the scheduled races. I’m not personally a big fan of stunt riding, but the guys that performed were pretty good and it was fun to watch, especially as a supersport rider myself. I couldn’t even begin to imagine pulling off some of the feats these dudes are capable of on a motorcycle.

Next were the BMW Salty Sprint Races, drag races on a stretch of closed public road running parallel to the beach. Participants went head to head, each piloting a new BMW R nineT as fast as possible in a straight line from a standing start. The BMW-sponsored event was made all the more official with an array of cameras, a chase-drone, banners, a flag-dropping woman, and of course, custom numbered RSD X BMW Salty Spring Race jerseys.

Though the competition was friendly and whatever the opposite of cutthroat is, those competing did push themselves and the Beemers, with rear wheels sliding or front wheels lofting from the tarmac. Despite a few squirrelly runs and a close call or two, nobody went down and everyone – the bikes and the people that raced them – went home in one piece.

After the Salty Sprint Races I made my way over to the Vendor Village to grab a beer and check out some of the wares being offered. There were booths from smaller boutique companies like Inked Iron, bigger commercial brands like Von Zipper, aftermarket parts companies like Vance and Hines, and ASV Levers, and a hipster-baiting Ducati Scrambler lounge boasting free cold-brew coffee. Demo models of the entire Ducati Scrambler lineup, plus a beautifully customized Scrambler example, were also on full display for attendees to swing a leg over. BMW and Indian Motorcycle also had large display areas with popular machines from their 2017 lineups.

Former RideApart staffer and all-around awesome guy; Jamie Robinson was there for the festivities, manning the MotoGeo booth/tent with his family, in addition to participating in the Salty Spring Drag Races. Robinson brought out his stripped-down, custom ’07 CBR600RR, which you may have seen in a popular RideApart Youtube video from 2012. He also brought the machine he’s currently riding: "The Freedom Machine." It's a Ducati Scrambler that he and Roland Sands customized together. Robinson explained that he does loves the Honda 600 - pointing to its use in Moto2 to make his case - but the Scrambler is much easier to whip around when off road. Because when you’re Jamie Robinson, you take the Ducati “Scrambler” moniker further than most.

Jamie Robinson waiting for his turn to drag race

As exciting and fun as it was to watch the day’s races and performances, the assemblage of custom builds was purely fantastic. Just about every kind of custom bike you can imagine was there, with examples from pretty much every manufacturer and era. There were tons of RSD builds that I had only ever seen in pictures online - including the 2016 RSD X Indian Scout build I picked as Bike of the Week a few months back. I’ve always been a big fan of Roland Sands, but getting to see a large selection of machines that he’s customized gives a much better sense of just how much range he has as a builder, and the caliber of his creativity and talent. The professional quality on every single RSD build was outstanding, many of which could pass for exotic factory offerings.

As undeniably cool as the RSD bikes were, there was also a multitude of customs from other noteworthy builders such as Revival Cycles, plus a few “internet-famous” bikes such as UMC’s Ducati “Hyper Scrambler” and Stacie London’s Honda “Triple Nickel 555.” One of my favorite bikes was a little RSD custom I’d never seen before that took a Honda Grom and swapped in a power plant from a TZ250. Badass.

Another personal favorite was an absolutely insane custom build from builders Yuichi Yoshizawa and Yoshikazu Ueda of “Custom Works Zon.” The Japanese duo flew themselves and their bike - entitled “Zonkern” - in from the land of the rising sun to attend the first annual Moto Beach Classic. Despite a pretty substantial language barrier, I was able to learn that the build started its life as a Buell S1, though you’d never know it because the 1,203cc American engine is hidden beneath a layer of wonderfully unique hand-built, engraved, and pinstriped aluminum bodywork. The two-man operation exclusively builds Harley customs, all of which are seriously next level. Do yourself a favor and check out the duo’s website, their Zonnegodin build from last year is equally bananas.

The coolest Buell to ever come from Japan

A BMW S1000RR dressed up with some old-school flavor

There was also a smaller but nonetheless exquisite collection of antique motorcycles including a perfectly restored 1910 Flying Merkel and an original 1907 Indian Tri-Car with Sedan Chair. The two “Golden-Era Bikes” were from a private collection but were borrowed and on display with Eddie Lee who is the creator of Iron Vault Studio, a photographer, and the creator of the book Timeless American. The coffee table book has more than 250 pages of beautifully color-printed photos Lee took of one owner’s private collection of pre-1916 (WW1) American motorcycles. Separate from the official Indian Motorcycle display area there was a tent showing off a handful of noteworthy vintage Indians, including (a replica, albeit a perfect one) an antique 1911 board-track racer.

Classic Indians and a board track replica

The main event was the flat track racing which was held on a specially made track - courtesy of Indian Motorcycle. There was a handful of different classes including “Run what ya brung,” vintage hand-shift, and the Super Hooligan class, which raced the penultimate round on Saturday at the Moto Beach Classic. The racing was a total blast to watch from the sidelines. Riders slid their rear wheels out to the side as they jostled for position in the multi-lap races. The final qualifying round consisted of a grid with 18 racers, which seemed like it was asking for trouble. And it was. Three times the race started but was almost immediately red-flagged after a multi-rider crash resulted in a pile-up. Despite several of the crashes looking downright nasty, everybody who went down was able to dust him- or herself off afterward and muster on. I’ve always been a much bigger fan of road racing than I have flat track, but standing mere feet from the action suddenly made the appeal of the latter abundantly clear.

Two days before the event RideApart talked to Roland Sands and asked him why he opted to take on such a massive logistical nightmare of an undertaking. Sands half-jokingly said: “I unfortunately knew all the right people. I had this crazy idea and I hit some people up and they were like, ‘Yeah we can totally do that!' And you’re kinda stuck doing it, putting your money where your mouth is you know?”

Sands went on to explain that his friend Alicia Whitney owns Sea Legs wine bar as well as a few restaurants on the beach in Huntington. Whitney started Sea Legs Live, a venue that holds concerts on the beach.

“I hit her up and asked if she thought the state would let us throw motorcycle races next to the concert,” said Sands.

The following day Whiney called back and said: “The state would love for you to do it, just tell them when you want to do it.”

Because the event location is technically a music venue and parking lots, it only made sense that the first ever Moto Beach Classic had a few live music acts. Black Uhuru played first, followed by Spendtime Palace, then War Girl in the early evening. By nightfall Unwritten Law took to the stage and performed to an intimate crowd. The band Lit closed out the event's festivities.

Through his years in the motorcycle industry Sands has made myriad connections, so when it came time to find corporate sponsorship, the task wasn’t too taxing.

“I’d love to make it an annual thing and for it to grow every year, adding new elements into the mix along the way," Sands said. "The state beach has been really cool to work with us and they want this to be a multi-year project, so it hopefully will be.”

Despite lacking any official figures, turnout to the inaugural Moto Beach Classic appeared to be a total success. Based on the huge number of spectators lined up against the chainlink fences watching the races and the swarms of individuals making up the crowd that constantly flowed about the festival, I’d be pretty surprised if there aren’t more Moto Beach Classics. It was great to see such a large turnout from motorcycle and racing enthusiasts. I’ve personally attended a decent number of motorcycle shows, expos, and events, but I can honestly say the RSD Moto Beach Classic was some of the most fun I’ve ever had at a motorcycle festival. Here’s to hoping for a second annual Moto Beach Classic!

The $50K prize bike for the Super Hooligan series winner