Bike of the Week: Spirit of the Seventies’ KR750 Tribute 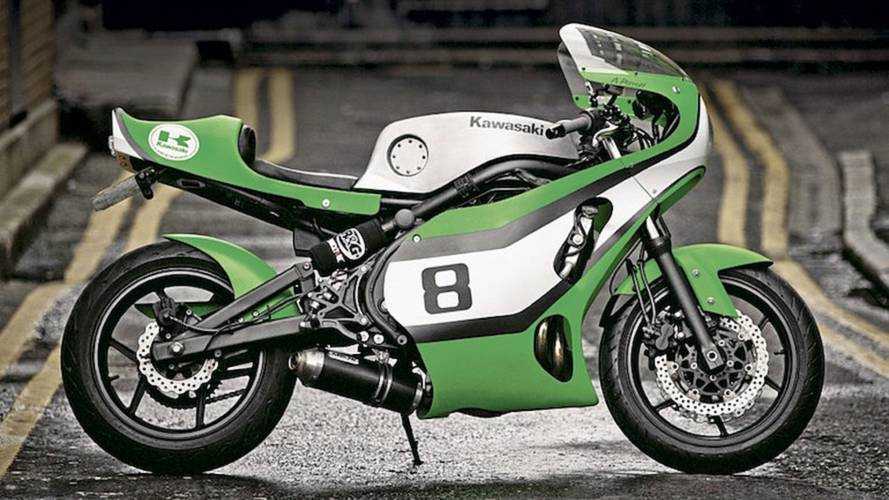 This gorgeous machine looks like it was built in 1975, but you might be surprised to learn what's under that dustbin fairing.

Aaron Perrott’s Kawasaki is a spitting image of a 1975 Kawasaki KR750 racer - it has the bodywork, distinctive up-swept tailpiece, bubble screen, and Gary Nixon/Erv Kanemoto livery – but Perrott’s bike is an imposter, albeit of the coolest kind.

What you’re looking at is a 2008 Kawasaki ER-6f, or what folks in the States know as a Ninja 650R. The frame is bone-stock, as is the engine, but nonetheless Kent, England, -based customs shop Spirit of the Seventies has done an outstanding job of transforming this modern daily commuter into a dead ringer for a bonafide two-stroke triple racing classic from ’75. This already impressive Kawasaki is made that much more noteworthy when you consider the fact this build is 100-percent street-legal, boasting an array of subtle lights and indicators.

Before today’s manufacturers were churning out models with vintage aesthetics but modern performance, this task was left to custom builders. Love it or hate it, we have the custom bike scene to thank for hottest current trend in production motorcycles.

A good direction to take when looking to create a retro-inspired modern build lies in using characteristics that have proven themselves beloved by the motorcycling world. Of course, this comes with the risk for greater scrutiny: get it wrong, failing to properly pay homage to a classic, and people will be quick to point out where you fell short.

Aaron Perrott saw photos of a Kawasaki W800 Scrambler build that Spirit of the Seventies created in 2012 and decided he wanted a build of his own from the Kent-based shop. Because Perrott already had a 2008 Kawasaki ER-6f he knew he wanted his bike to be based around one of the iconic bright green models from the Japanese heavy industries company. The Kawasaki KR750 was famously raced by Mick Grant at the Isle of Man TT and by Gary Nixon at the Formula 750 Championship. The KR750 is the epitome of what most people love about vintage racers, possessing old-school full-dustbin bodywork and a funky upswept tail-section. The classic two-stroke racer was an obvious choice for inspiration - selected by Spirit’s Tim Rogers and Kev Taggart - but a less than ideal one when it came time to actually transforming the modern four-stroke parallel-twin commuter. Especially because Perrott said he didn’t want the chassis changed at all. Additionally, the IT specialist wanted the entire conversion to be reversible in a day’s time sans welding.

Despite the challenges the building team got it right. Spirit of the Seventies' ER-6f tribute does exactly what the name suggests: it pays tribute to one of the most iconic motorcycles ever produced by Kawasaki. As you probably guessed by the builder’s name, the UK-based shop specializes in 1970s-inspired modern customs, mainly Triumphs. One of my favorite things about this bike - aside from how accurately Spirit was in recreating the KR’s look - is it gets ridden and enjoyed on a daily basis. Maintaining the race-ready appearance of the KR750 meant its builders had to find subtle ways to hide the necessary doodads required for a legal road-goer. Oberon bar-end LED indicators are well hidden up front. A pair of small circular LEDs on the back of the tail act as the brake lights and nighttime running-lights, while a pair of micro-LED indicators poke out from either side of the fender-eliminator kit holding the license-plate.

Typically the frame and engine are where you start with a custom build, but because the chassis and powerplant on this Kawasaki custom would be unadulterated from their stock form, all of Spirit’s attention went to the cosmetic design of the bike. First a cardboard mock-up of the custom bodywork was done to give the team something to go by and a sense of the completed project’s appearance. Spirit was able to call on a few friends and connections for favors in order to bring this project to fruition. The shop's first move was sourcing an old fairing from an unspecified Bimota. It then cut the bodywork to accommodate the ER-6f’s radiator and exhaust headers. The bubble windscreen was made specially for this project by UK-based Skidmarx, who specialize in this area.

The cardboard mock-up of the soon-to-exist custom tank and tail section.

Surprisingly - aside from the windscreen - the tank is the only one-off piece on this entire build. Everything else was a modified unit sourced from an existing model. In addition to the Bimota fairing, a seat was borrowed from a Suzuki TR750. The fiberglass tail section is from some other unspecified 1970s two-stroke racer, which the guys at Spirit had to widen and cut in several places to get it to fit the existing subframe. Getting everything positioned correctly was one thing, but getting it to look uniform was another effort entirely, requiring untold hours of smoothing out sections and making tweaks here and there to get everything to look just right.

The one-off bare metal tank is undoubtedly one of this build’s primary features. Initially Perrott wasn’t on board with having the custom fuel-cell made for this build, explaining: “We went back and forth on the tank. I wasn’t sure if I wanted to go down the custom-made tank route.”

Kev Taggart, who serves as Spirit’s in-house design guru, eventually convinced Perrott that a bespoke tank was the only way to go. Obviously the cost of doing this wouldn’t be cheap, when Perrott was asked about the fuel-cell’s cost, his response was: “Think of a number and double it.”

That said, Perrott now readily admits that the custom tank was a must.

With how large the custom and racing scene is in the United Kingdom, I was a little shocked to learn so few options exist when it comes time to find a specialist to make a one-off tank. The team at Spirit ended up reaching out to an intentionally unnamed vintage automobile bodywork expert, who was able to deliver exactly what they needed. The real battle was finding a way to get the tank from the 1975 racer to properly sit on the 2008 twin’s frame and – more importantly – look the way it should. The tank’s side sports the quick-filler blanking plate that Kawasaki utilized on some of its machines at the Daytona 200 in the ’70s. Spirit opted to leave the tank’s raw metal bare to show off the expert craftsmanship of the hand-beaten alloy fuel-cell.

On top of the tank’s being sans paint, another difference that pushes this bike further from the replica end of the spectrum is its rear suspension. The original 1975 KR750 had dual-rear suspenders. The ER-6f, however, features a particularly distinct offset mono-shock on its right side. The folks at Spirt of the Seventies cleverly disguised this suspension unit via a R and G Shocktube.

Spirit did a remarkable job of building the bike for the customer the way he wanted it.

“They even measured my inside leg to make sure they didn’t make the seat too tall,” said Perrott. “The attention to detail is impressive.”

Perrott used to compete in Enduro racing when he was younger, always racing with the No. 8. So, when it came time for the matte paint job to be laid down by D-Luck of Brighton, England, Spirit had Perrott’s old number painted on the side of the Kawasaki. A special coat and matte finish adorn the bike, a feat that’s achieved via spraying at low pressures. Spirit of the Seventies had its company logo semi-discreetly slapped on the back of the build’s tail-section as the final touch. A pair of  adjustable Italian ValterMoto rear-sets were also mounted, using Perrott’s measurements to select a setting. A set of LSL clip-ons went on the bike, too. As Perrott requested, the engine was left stock – aside from the addition of the Arrow exhaust system.

The build's rear-lighting and Spirit of the Seventies logo.

Kawasaki has been teasing its upcoming retro-modern - the Z900RS - promising to reveal the bike this week. It has pretty big shoes to fill and some even bigger competition, but hopefully the Japanese marque has been taking notes and its new model will have taken a page or two out of Spirit of the Seventies’ design playbook.

This isn’t the first time someone has built a modern custom dressed up as a fully faired retro race classic, but this example does it particularly well – blurring the line between tribute and replica. Whatever you choose to call it, it’s pretty damned cool. Customs like this proved to manufacturers that there was indeed a market for models like the Ducati Scrambler Cafe Racer, BMW R nineT Racer, and Triumph Street Cup. Maybe in 20 years, when every production bike looks like a custom, things will come full circle and the cool thing will be modifying your ride to look like a stock offering.

All told, Perrott spent more than US $13,000 on the transformation of his 2008 ER-6fiddy. He has used his mid-size Kawa for competing in Hill Climb events and has taken it to the track, in addition to using it as a daily ride. It was important to him to keep the geometry and feel of the bike the same, while giving it a total cosmetic makeover. Spirit knocked it out of the park, especially considering the constraints placed on the build.

If you have a bike you think deserves to be RideApart's next Bike of the Week, drop us a line at info@rideapart.com