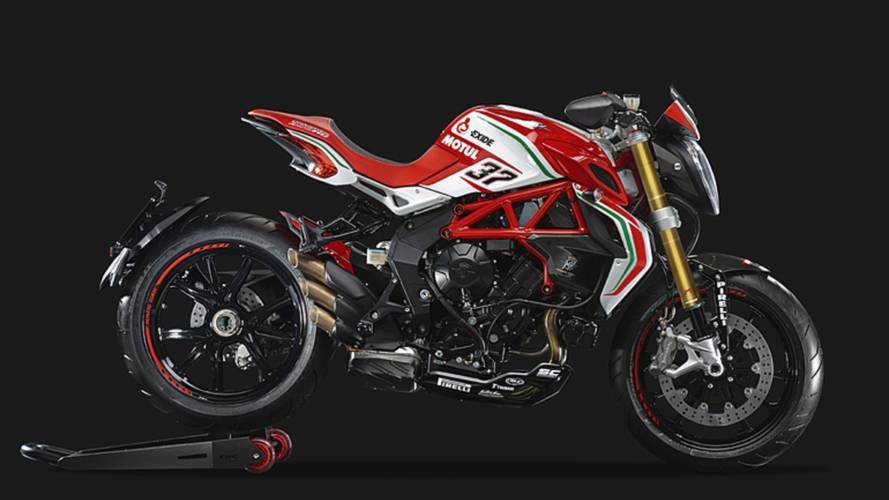 MV Agusta just released the newest addition to its sexy, high-performance RC lineup–The Limited Edition Dragster RC. With the Dragster RC, the venerable Italian bike maker took its top-selling machine–the Dragster RR–and cranked it up to eleven. They added some top-shelf components, a little bit of carbon-fiber, a handful of mechanical updates, and a shiny new Reparto Corse Superbike World Championship livery. Like the rest of MV's RC-series bikes, the newest Dragster will be produced in limited numbers, 350 total units, to further the machine’s exclusivity.

In addition to the World Superbike-inspired paint job, the new Dragster RC receives a handful of trick knickknacks, some aesthetic and some performance oriented. The bike gets carbon fiber windscreen and radiator-panels, gold-anodized, fully-adjustable Marzocchi front-forks, forged aluminum-alloy rims from the F4 RC, and a red stitched saddle embroidered with the RC logo. In my opinion, MV Agusta's machines are some of the best looking motorcycles made today. (Agreed. -Ed.) The Dragster in particular is one of their best looking models, and the newest version might just be one of the sexiest motorcycles ever built.

While the bike is beautifully designed and has a seriously aggressive stance, it also happens to be a complete beast performance wise. The Dragster's three-cylinder 798cc mill makes 140hp at 13,000rpm, which is a hell of a power-to-weight ratio in a bike that weighs roughly 400 pounds soaking wet. To keep the engine nice and cool, the bike is equipped with a super efficient radiator and oil cooler. Power gets to the rear wheel via a constant mesh, six-speed transmission equipped with a slipper clutch with electronically assisted quick-shift for both up and down. The Dragster is reported to top-out at 153.1 miles per hour, making it a seriously fast triple that seemingly lives up to its name.

In addition to the motorcycle itself, anyone who ponies up the roughly twenty grand that MV Agusta is asking for the Dragster receives a certificate of authenticity that corresponds to the production number-plaque on the bike and a “special Dragster RC bike cover”. You can find more info on this powerful and gorgeous triple right here at MV Agusta's website.