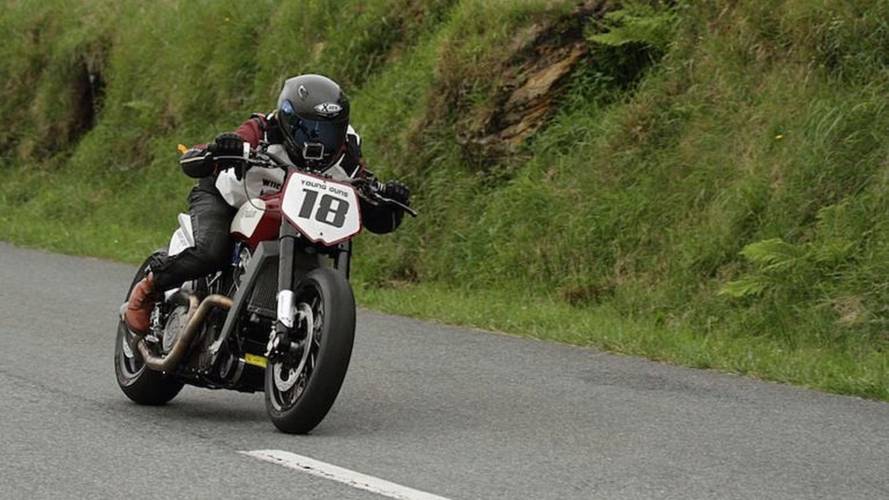 Indian's starting to get pretty good at winning races, no matter where they are or how many hipsters are involved.

“The Scout was running so, so well,” she said. “I know that the Young Guns dialed up the power for the race and I could certainly feel that on the sprints today.”

After handily winning three elimination races, the Scout, nicknamed Miracle Mike, staged against the Workhouse Speed Shop BMW ridden by Sebastien Lorentz in the final. The Scout's nitrous-boosted 1133cc V-twin performed flawlessly... uh... after a quick fix to an exhaust pipe that Katja had managed to drag in the track’s bend during the third heat. The sprints are held on a mountain road at the top of Mount Jaizbikel near San Sebastian, Spain.

The Young Guns – Fabian Witzig and Nik Heer – celebrated in the pits with Katja and were thrilled with the win. For Fabian, the technical mastermind behind much of the engine work on the Scout, there was a certain pride in the fact his build had thrashed a field made up of Ducati, BMW, Yamaha, Buell, and Harley-Davidson machines. There was even an electric bike from Essence Motorcycle.

“It feels amazing,” Fabian said. “You just have to look in the pits now to see how the standard of bikes is increasing. The best thing for me was to see Katja today take that corner at full throttle, it really was an amazing sight.”

In a field of more 100 machines and five different classes, the Scout special topped the most prestigious class. Grant Bester, GM for Indian Motorcycle in Europe said: “This project was all about bringing the right cool people together to see what Indian could do. We wanted to try and bring back the essence of the Indian Motorcycle Company in building, competing and having fun. Seeing Katja ride Miracle Mike today was a thrill and I’m delighted that Indian came out on top.”

The next event for the Young Guns and Miracle Mike is the final Essenza sprint race in September at Glemseck, Germany.