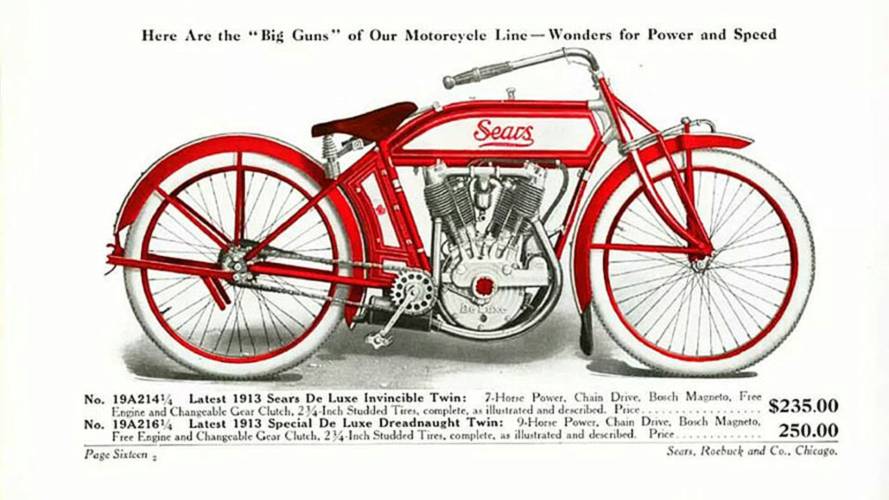 You can find everything in Sears and Roebuck's catalog.

If you're a rider of a certain age like me, you probably remember the Sears catalog. If you don't, let me give you a quick primer on it. Also, get off my lawn. Oh, and before we really get deep into this story let me give you a little caveat: information about Sears motorcycles is scarce and spotty at best. The bikes were sourced from numerous different manufacturers over the years, most of them defunct at this point, and early Sears records were lost or destroyed in the slow decline, reorganization, and sad breakup of the company.

For my primary sources, I was limited to short articles from How Stuff Works, dusty old coffee table books, and circa 1998 websites kept by weird, obsessive, pedantic old graybeards out on the fringes of the internet (Probably one of our key demographics –Ed). Many of these are, as you might expect, confusing and often contradictory about the whys and wherefores of these obscure old bikes. What I'm saying here is that I've done my best to get my facts right but I may make some mistakes due to the quality of sources. If you have a Sears bike, or know someone who does, please feel free to correct me in the comments. Also, bring it over so I can ride it. With that out of the way, let's get to it.

Catalog listing for the 1913 Auto-Cycle. This was Sears' entry-level model.

From the mid-1890s until 1993, Sears and Roebuck Co. produced a home goods catalog in which customers could mail order anything from clothes to tools to cars to entire homes. They pioneered mail order at a time when department stores were new, and put comfort and style within reach of nearly every American. In 1909, with internal combustion technology on the rise and the horseless carriage sweeping the nation, the company decided to get in on the new-fangled motorbike craze and introduced the Sears Auto-Cycle.

The first generation Auto-Cycle was a rebadged Thiem supplied by the Joerns-Thiem Motor Company out of St. Paul, Minnesota. It had a simple, sturdy, 19.5-cubic-inch four-stroke single that produced a whopping 4 horsepower, a single speed transmission, battery ignition system, a leather belt final drive, and a rear coaster brake. Pretty standard equipment for the time. If you were a high roller, you could spring for an optional acetylene headlight for night riding and a magneto ignition system. In 1910, Sears added Thor motorcycles – built by the Aurora Machine Company from Illinois – with bigger 29 cu-in engines to its lineup. The Thiem and Thor machines were Sears' entry-level bikes – small, affordable, and modestly equipped – and soldiered on largely unchanged until Sears stopped selling bikes around the beginning of World War I.

In probably 1912, Sears released three new bespoke motorcycles to its lineup: The Deluxe, The Invincible, and The Dreadnaught. These all-new bikes were designed and built in conjunction with Chicago's Excelsior Cycle Company, not to be confused with the more famous Chicago-based Excelsior Motor Manufacturing and Supply Company that made the Excelsior Super X. They featured "DeLuxe"-brand single and V-twin engines built by the F.W. Spacke company from Indianapolis, Indiana, Schebler carbs, Mussleman hubs, new-fangled chain final drives, and a battery-powered ignition system.

A 1915-ish Sears DeLuxe. The bicycle pedals were used to start the bike's engine.

The DeLuxe was the smallest of the three, equipped with a Spacke "Big Five" single that was similar to the older Thiem and Thor models. The "Big Five" displaced 30.5 cu in and made around 5 hp. It weighed somewhere between 220 and 300 pounds (I've seen at least four different weights listed), and was relatively fast for its day with a stated top speed of nearly 50 mph. Like its older cousins, the DeLuxe could be optioned with acetylene lights and, new for 1911, a high-tech gear-driven speedometer run from the rear wheel. They could even be optioned with a Bosch magneto ignition, which was some cutting edge equipment in those days. Depending on options, the DeLuxe could run as much as $220 – about $5,300 nowadays.

Like the DeLuxe single, the Sears V-twins could be equipped with speedometers, magneto ignitions, acetylene lights and two-speed transmissions. In 1913, an Invincible would set you back $235, just $15 more than the DeLuxe single. The Dreadnought, with its two extra horsepower, ran $250 or about $6,100 in 2017 dollars.

For their time, and despite the fact that they were largely badge engineered Frankenstein parts bin bikes, Sears motorcycles had a reputation for quality, ruggedness, and reliability. They were competitively priced – about $50 cheaper than equivalent Harleys or Indians – and you couldn't beat the convenience. There aren't many of these old warhorses around today. My sources suggest that there may be as few as 10 of the Spacke-powered twins left in the world, most of them Dreadnoughts, and I couldn't find any estimates on other surviving models.

An ad for the Spacke DeLuxe V-twin used in Eagle motorcycles. This was the same kind of engine used in the ,Invincible and Dreadnought.

Sears got out of the motorcycle business in 1916 due to, well, reasons. In my research I couldn't find a solid answer as to why they quit selling bikes, but it was probably some combination of financial issues and the onset of WWI. They did, however, continue to sell motorcycle accessories, clothes, and helmets. By the 50s though, Sears felt that it was time to get back into the motorcycle trade and introduced a whole new line of badge-engineered Sears bikes.