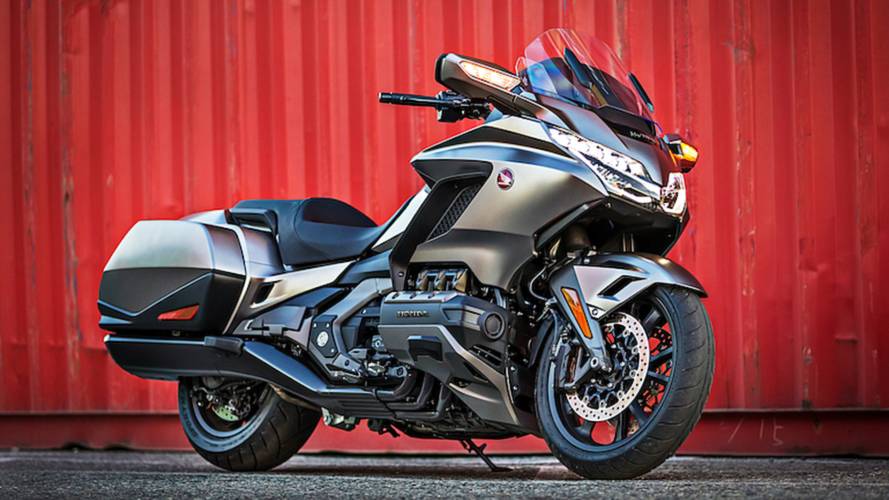 Honda's flagship moto rolls into 2018 with an all-new look and and all-new attitude, which Big Red hopes will thrill its faithful customers and inspire new ones.

Honda this week pulled the cover off the sixth generation Gold Wing, hoping to once again place it atop the motorcycling world as the creme de la creme of tourers.

Back in 1975, when Honda introduced its Gold Wing to the masses, the bike's shaft-driven, one-liter, water-cooled, flat four engine was a departure from the norm for the brand – setting it apart from the sea of air-cooled, chain-driven parallel twins and inline fours. Honda's "ultimate motorcycle" challenged a weak touring market with few options, allowing the brand to fill a void where comfort and affordability in a performance-oriented motorcycle had been lacking. In today’s market, that statement is no longer valid and fair competition can be had across all model segments. So, Honda is faced with a simple option: adapt or die. Honda’s ground-up redesign of the Gold Wing, one of the longest running production models in motorcycle history, perfectly illustrates the company's willingness to face that challenge.

The 2018 Gold Wing is aimed at retaining its most loyal enthusiasts, which have kept the model alive for the past four decades, in addition to luring a new (and potentially younger) generation of riders into the touring segment. A key element of the redesign was dropping approximately 90 pounds (40 kg) from Honda’s beloved “couch on wheels” by making diet/lifestyle changes wherever possible within the 1,833cc engine, its components, and chassis. Boosting the valves per cylinder from two to four improved combustion efficiency and increased fuel economy by 20 percent, thereby allowing 1.1 gallons of gas tank to be trimmed without sacrificing the range. Just a few of the mechanical and technological upgrades made in this model year are: throttle by wire, preset riding modes (Rain, Tour, Sport, and Econ), ABS, double wishbone front suspension, and a large 7-inch display with Apple CarPlay compatibility.

For the 2018 model year, Honda offers five trim packages, available under the base level Gold Wing and Touring categories. Touring models have two transmission options – with an airbag offered only with dual clutch transmission (DCT) – a top case boosting the total storage volume to 110 liters, rear audio speakers, electronically adjustable suspension, heated seat and grips, and reverse gear. The DCT option is a seven-speed automatic with an additional walking mode. The base level Gold Wing, offered in standard transmission and DCT, is a pared down version of the Touring model primarily with a shorter windscreen, manual suspension adjustment, and no top case or heated seat. The standard transmission model does not come with a reverse gear.

LED technology is used throughout, with the multiple-lens front lights forming the new "wing lines" of this latest advanced performance touring model, and the LED turn signals having a convenient auto-canceling feature. A user-friendly luggage system bolsters on-road convenience while also contributing to the vehicle's compact dimensions, sporty appearance, and lighter weight. Each saddlebag holds 30 liters, while the top case has a 50 liter capacity, and high-quality lid dampers are used throughout.

The Gold Wing chassis has undergone multiple revisions to increase low-speed maneuverability and maintain high-speed stability. A robotically welded twin-spar aluminum frame uses plates with reconfigured thicknesses and is matched to a single-sided swingarm with new pivot-area structure. Together, the frame and swingarm contribute to weight reduction, which, when combined with the low center of gravity and better mass centralization, contributes significantly to the bike's improved nimbleness.

Suspension is comprised of a new double-wishbone front-suspension system and Showa shock absorbers front and rear. Designed to offer reduced friction and less inertial mass for the front-end components that are manipulated via the handlebars, the system also leads to more compact vehicle dimensions, as its different stroke trajectory enabled engineers to position the engine closer to the front wheel. For added comfort, the Gold Wing uses a Pro-Link rear-suspension configuration with progressive reaction. On most models, suspension damping and preload are electrically adjusted.

Brakes have been upgraded via radially mounted front calipers and larger, 320mm rotors. Electronically controlled combined ABS works to distribute braking force to the front and rear wheels while saving weight through the use of a smaller, lighter circulation-type ABS modulator.

Honda’s Gold Wing model has long been a representation of the “adapt or die” mentality; it's hard to believe now but its humble beginnings as a touring motorcycle were not as well received as expected. Honda’s loyal fanbase was initially hesitant of the naked touring machine, sporting an aesthetic borrowed from the popular CB750 "superbike." The production prototype had initially been kitted with a small fairing and windscreen to provide comfort and protection from the elements for those chasing endless miles of pavement in search of "what lies beyond." But, as the story goes, the original fairing molds were accidentally destroyed before production; the rest is a history, defined by Craig Vetter and the resultant surge in aftermarket manufacturing. Once the Gold Wing was dressed up with all the latest aftermarket accoutrement (windshield, fairing, saddlebags, a rear trunk) and its reputation for reliability held true, the tides forever changed in its favor.

The Gold Wing's exponential growth and popularity within the first five years was substantial enough to shift its production from Japan to a small town in Ohio between 1980 and 2010. Year after year, Honda continued to make incremental changes to its most popular model to satisfy consumer demand by expanding fuel capacity and wheel base, modifying the chassis, suspension, and braking systems, and offering stereo intercom, CB radio, and a factory-installed fairing. With the engine's capacity stretched to its limits, it was clear that an engine redesign was warranted to keep up with the demands of a more competitive touring market. Honda engineers revisited their original flat six engine prototype from 1972, and streamlined it successfully to incorporate into the 1988 Gold Wing model and expanding the engine capacity to 1,520cc. Apart from offering the world’s first motorcycle airbag (2006), the last substantial revision to the Gold Wing occurred in 2001, resulting in a fuel-injected engine with a capacity of 1,832cc and optional ABS brakes.

The side-by-side comparison of the 2018 with the 1975 flagship model (and everything in between) illustrates Honda’s commitment to the evolution of the Gold Wing as the "ultimate motorcycle." Given such dramatic changes for this model year, the question now becomes: where will they go from here?