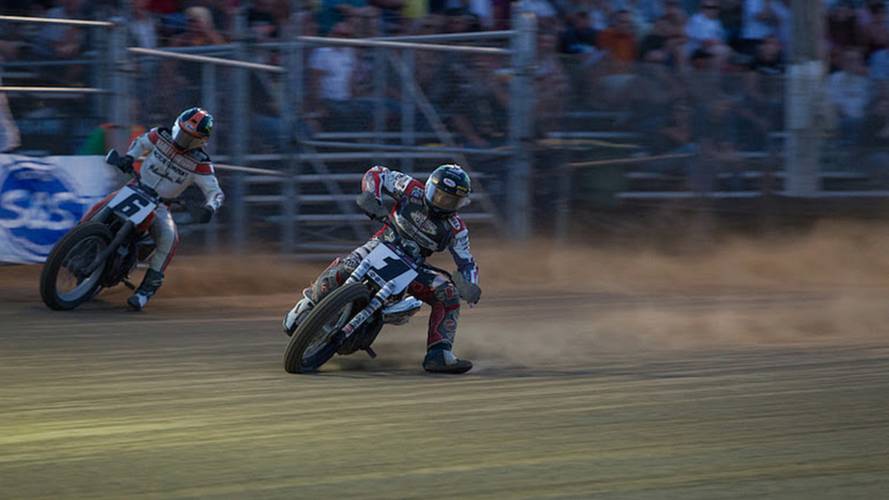 The American Flat Track series is in the middle of its first year, and with the season half done things are suddenly getting shaken up.

The inaugural season of American Flat Track sped past the halfway point this weekend – the occasion marked by a breaking of Indian’s three-month winning streak.

If you haven’t been paying attention, the American Flat Track series kicked off on St. Patrick’s Day this year at Daytona International Speedway. The series is a descendant of AMA Pro Flat Track, which was retired in 2016 amid a general feeling of a need for change.

Last year, we spoke to American Flat Track CEO Michael Lock about some of those changes and so far it appears they’re delivering success. From our standpoint, flat track racing is in the midst of a renaissance. There have been rule tweaks, big-name sponsorship, and a TV deal with NBC Sports. But one can’t ignore the effect of the renewal of the storied Harley-vs-Indian rivalry.

Both manufacturers have factory teams in the series, with Harley arguably being caught on the back foot this year by the sheer quality of Indian’s riders (many of whom had been cherry picked from Harley’s team) and its FTR750 racing platform. Up until Saturday the No. 1 slot at every race had been occupied by someone wearing Indian Motorcycle racing leathers. Four times this season, Indian had swept the podium entirely, with its riders Jared Mees, Brad Baker, and Bryan Smith being too much for everyone else to handle.

Indian has been so dominant this season that its riders were having to create new challenges for themselves. Coming into this week’s contest in Lima, Ohio, Mees had decided to target something more than just a first-place finish.

“ would complete a grand slam in a single season,” he said. “Winning all four disciplines of flat track races is actually something that I would like to try to get done this year.”

(The American Flat Track season sees racers competing on four different types of track. One of the changes from the old AMA Pro Flat Track days is that racers now have to ride the same type of bike throughout the season, whereas previously they would use different bikes for different tracks.)

Indian’s dominance was starting to be a concern for a few folks who feared the series might become a little too predictable if the team from Minnesota (nee Massachusetts) refused to stop winning. Perhaps that explains the spontaneous display of congratulations from the entire field on Saturday when Kawasaki-riding Briar Bauman ended up at the top of the podium after a dramatic evening in which a number of red flags provided the plot twists.

“I can't even put it into words. I'm just really proud to get this win. I put a lot into it,” said an elated and emotional Bauman afterward. “I didn't want to look back because I was sure they'd be right behind me… This was something you dream of your whole life, and you question if it's going to happen or not. I'm happy it actually happened."

In the process, Indian’s streak was broken. As was Harley’s; hitherto, the Harley-Davidson team had been undefeated in 21 contests at the Lima Half-Mile track. Related to that, one suspects there is deep frustration on the Harley side these days; it’s been dominating flat track for decades and won’t like how all this feels.

The scuttlebutt is that Harley’s XG750R racing platform, which uses effectively the same powerplant as the one found in the Street 750 and Street Rod, simply hadn’t been tweaked enough yet for it to be truly competitive in this series. I have no doubt the team is working its ass off to change that fact. If Harley isn’t able to claw its way back this season, expect it to come back with ferocity next year.

That said, this break in their undefeated streak will probably light a fire under Indian and its riders as they look toward the rest of the season.

There are 10 more contests to catch over the next few months, with the final battle taking place in Perris, California, on 7 October. Having been at the season-opening race at Daytona Beach, Florida, I can assure you that flat track is a hell of a lot of fun to watch. Check out the full race schedule on the American Flat Track website.