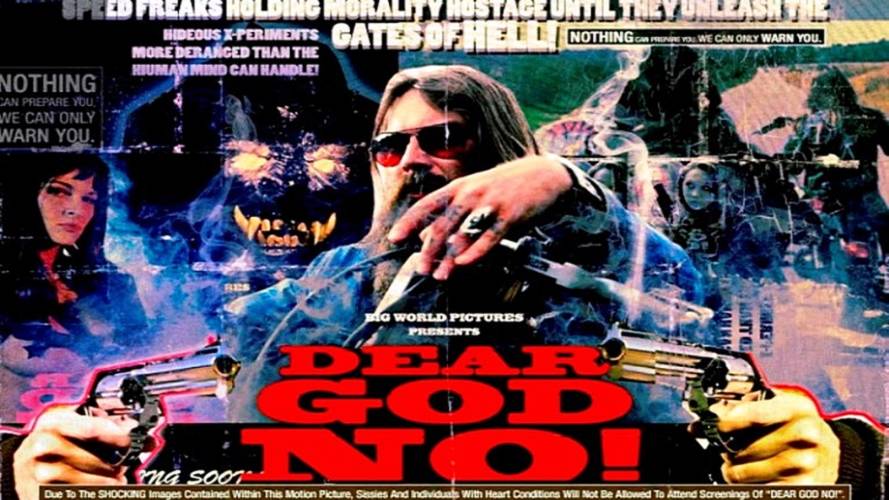 Dear God No! (2011) - Moto Movie ReviewPrepare to see a gang of the most depraved bikers do some of the most awful things ever on film, until an...

Prepare to see a gang of the most depraved bikers do some of the most awful things ever on film, until an ex-Nazi and bigfoot save the day. Dear God No! is a neo-grindhouse independent feature and one of the best north Georgia's film industry has to offer, unfortunately, and I hated it from the missing comma in the title till the end credits.

I went digging for biker/horror movies to review before Halloween, and this is one of the ones I came up with. I'm going to warn you right off the bat, I have seen some bad movies, but this is one of the worst, and it can't even rise to the level of so bad it is good because it is knowingly bad. I took one for the team here, and this was 81 minutes I will never get back. The directing and acting in Ed Wood's movies is better, and the writing is on par, but Ed did it all in earnest, which is why they are enjoyable in their awfulness. This was just awful, and you can look forward to the sequel, Frankenstein Created Bikers, in the near future.

Avoid this Godforsaken movie now, before it's too late!

The plot of the movie centers on a gang called the Impalers, who are the most horrible bikers ever, as exemplified by them kidnapping a van full of nuns, then raping and murdering them before the movie starts. When the movie fades up they are just waking up, defiling the naked nuns one last time (doing a burnout on one of them), and headed down the road to more murder and mayhem. They kill several more people, get involved in an altercation at a strip club with the owner, a rival gang, and some of the strippers, and head off to lay low until the heat dies down. If any of this sound exciting, or titillating, it isn't, because the acting, directing, and even the lighting conspire to make it all look like something you shot with your friends while on vacation, and drunk.

No, nobody knows why the strippers have Nixon masks on...nor will they care.

Meanwhile, at a cabin in the woods, a bookish young lady and her scientist father are discussing the latest strange occurrences. It seems all the animals have been acting weird, and it may have something to do with the professor's work, and possibly the death of his wife. Naturally, the bikers end up there in their quest for a place to hide, along with a pregnant woman and her husband, the prof, and his daughter, and things do not go well. There is rape, and murder, and incest, and hallucinations, and mutations, and Nazis, and I think someone gets literally torn in half by Sasquatch.

The filmmakers make a point of boasting that they did it the old school way, on real 16mm film, but everyone knows it is cheaper, and better to just shoot video now. You could have shot this movie on an iPhone (in portrait mode) and it wouldn't have been worse. The lighting works against the mood, with even the strip club and basement dungeon looking as brightly lit as WalMart. The framing of the shots seems to indicate they only had one lens, and it could only focus from 12-feet away.The writing, editing and general pacing is horrible, with all the action in the cabin taking place in the last 15-minutes. The practical gore/blood special effects might as well be ketchup being squeezed out of a bottle, or red paint being thrown around for how realistic they are.

As far as I can tell, 75% of the budget went into paying a bunch of women to be naked all day in various capacities (and 10% went into designing cool posters). If you have ever watched one of those old school 1950s stag films, where the thinnest plot is just an excuse for burlesque dancers to take their clothes off and shake it, this will feel familiar. But the lighting, the fact that these are not professional strippers/models, and the music having been replaced in post production,means no one looks at all sexy. Also, for some reason several of the girls are wearing Richard Nixon masks.

Criticizing the acting or dialog seems unfair. I'm almost certain most of the lines were improvised. I am certain these guys were cast as the bikers because they were the only people who owned motorcycles that the director knew.

Rotten Tomato Rating: No critical rating, and just 33% positive from the audience. IMDB rates it just 4.1 out of 10, and Meta Critic

RideApart Worth Watching: No, did you even read the review? I would give it a 1 out of 10, only because my made up rating system doesn't start at 0.

Redeeming Quality: Seriously, you'd have to pay to see this movie on Amazon as it doesn't stream free anywhere, and why would you do that? I suppose the fact that you aren't going to accidentally see this anywhere, and it isn't going to pop up on your Netflix recommendations is a redeeming quality. Also, it is only 81 minutes long.

Worth Noting: If you have ever wondered if you could get bored looking a naked women, this movie is your answer.

Watch Instead: If you want to watch something in the same vein, that pays tribute to old school exploration and grindhouse, watch Rob Zombie's Devil's Rejects instead. There isn't a biker gang in it, but it is a much better movie by any measure. Plus, killer clown!

You have been warned, but if you must you can stream Dear God No! via Amazon and you can watch the trailer here, but it's NSFW so I'm not embedding it.