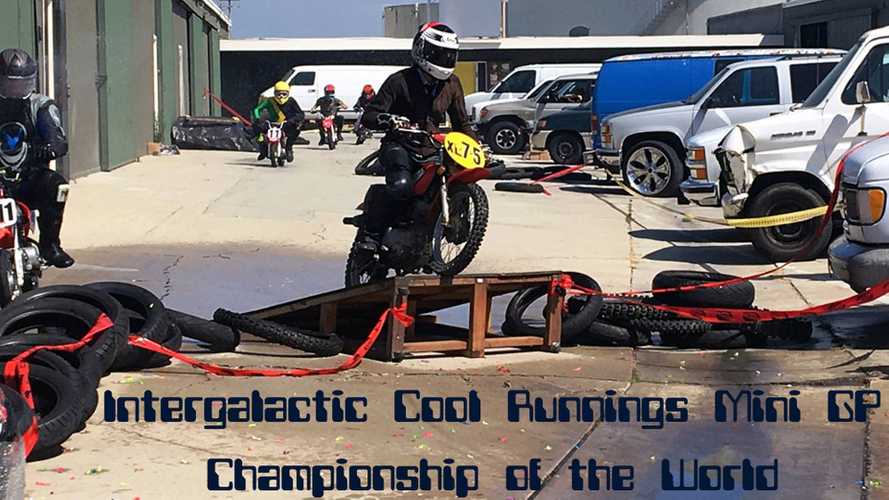 Our very own Sasha Rojas took on all comers to become the Intergalactic Mini GP Champion. We couldn't be more proud.

If you remember my coverage of the World Outlaw Minibike Championship, you may recall that I vowed to rise to the challenge at the next event, if and when it happened. This time, BA Moto threw the event open to not just humans, but to minibike riders of any species – whether native to this planet or from beyond. As you might imagine, this made it a much tougher race. I also rode and raced, but unlike petite yet tough Sasha I am huge yet soft like the Stay-Puft Marshmallow man.

The format of the race is simple. There are few rules and little definition of what constitutes a minibike. The race is run around a modified oval – with added chicanes – set up in a parking lot. Just like in Mario Kart, there is the option of taking a jump, which is shorter but technically a lot more difficult on most of these bikes, or going through a long sweeper with the added obstacle of children with water balloons and squirt guns on the side lines. With no prize money and thrift store trophies, this is obviously not a race that anyone takes seriously. Everyone seems to forget that when the green flag, or in this case a Jamaican flag, waves.

As expected at such a remote galactic outpost as Long Beach, CA, United States, Earth, not many competitors from off planet showed up. There were some galactic notables there in the crowd, though. I spotted at least one Predator out there, and what appeared to be a Xenomorph packed into a human sized spandex jumper. Ming (actually Marty) the Merciless made the trip all the way from Mongo to test out his newly built hot pink pull start bike, and of course our neighbors from Mars came by to play as well. It is actually surprising that more Predators didn't show up since they now have about 50% of the small engine market share, thanks to the deal with Harbor Freight. Word must have gotten to the crop circle aliens from Signs about the water balloons, and the horrible tragedy of a few years ago, because they didn't even come to spectate. There was a team of Reavers, or possibly Blorgons, but they were not allowed to race as it was decided their atomic pile was a danger to the rest of the competitors. They were allowed to do some exhibition laps however, but the children were brutal.

Because of the semi-underground nature of this event, you never know when it is going to happen so you have to be ready at a moment's notice to race. Luckily, I had been tweaking and tuning the Monster Moto M80 minibike for about a year now. Unfortunately the foot pegs were still an issue, even though they folded like a real bike. For paved road course work they had to be moved up and narrowed to allow for the real Moto GP lean angles which the tires and chassis were already capable of. So, out came the welder and angle grinder. Our other race bike was a yard sale Honda XL75 which is on long term loan from my 10 year old nephew. Despite a 40 year old knobbie on the back, blown fork seals, and tired rear shocks, it has the distinct advantage of still being a real Honda.

The bikes and riders were roughly classed into mini dirt bikes with knobbies (lots of 50-70cc pit bikes), pull start traditional minis (like the M80), and mini street bikes (both street legal minis and pocket bikes on "street" tires). A fourth race was for any woman rider on any bike and the two weirdos who showed up on tiny trikes. Then, at the end of the day was a free for all with everybody competing in two big races. I called dibs on the XL75 and lined up for the first race.

I looked like a giant out there among the tiny pit bikes, and I had to contend with the Jamaican xenomorph, a Rastafarian Predator from Lossa Engineering, and Jackson from Lucky Wheels who may be a Highlander. Jay Lossa jumped out to an early lead with Jackson right behind him, but the Highlander got cocky – a real problem for immortals – and overcooked the jump. I chose the long, safe way around when I saw the traffic jam at the jump. That put me in third place with the spandex clad Jamaican in second when everyone else had to slow down to avoid Jackson. We couldn't catch Jay, and though he tried mightily, Jackson couldn't catch us, so that's the way we finished four laps later. I think. Or Jackson may have passed me on the last lap. There is no official scoring.

Sasha lined up for the second race on the M80 with all the rest of the pull start bikes – six steely-eyed traditionalists with no gears and lawnmower motors. A glance at the lineup and I knew Sasha had her work cut out for her, as four of the six bikes had 212cc Predator power in them and the last was a 5hp Tecumseh. Compared to our little 80cc 2.5hp whip, those bikes may as well have been supersports. So, I decided she needed a bobsled style assist at the start to get her up to speed. Then the advantage of her light weight, our Monster Moto's superior chassis, and the round tire profile cornering ability should let her out corner everyone. I mean, just look at the fork angles and sketchy tires on those bikes! That was the plan at least.

What happened next is a blur, though it all happened at about 20 mph. Marty Party (in the gold helmet) had put some serious work in to that motor, because by the end of the race he was lapping the rest of the bikes. The man in the black helmet was fairly fast too, and had a lock on second place. I have no idea what happened to the bike with the skinny front wheel and chopped forks or the Rossi wannabe during the race since DNFs are rampant with these types of bikes. I do know that as the white flag was flying, Sasha's competitiveness and a poor choice of line by the pink bike put Marty into the wall. While he was back up seconds later and won the race, he never did lap Sasha.

In the ladies and trike-weirdos only race, Sasha took the XL75 out and seized an early lead. Then she lapped nearly the entire pack herself by the end of five laps. Later, in the second moto of the women's race, she did lap everyone because the larger size of the Honda XL75 allows an adult to corner it like a real bike. Also, the fact that it has really real suspension means a rider can jump it without fear. Well, at least not too much fear.

I insisted in racing the Honda again in the knobbie tire class, and again managed fourth or third or something. Then I tried the M80 in the pull start class, and this happened when I cornered beyond the limits of adhesion. I also managed to crash the XL75 when I jumped it and bottomed out the suspension on the landing, but I prefer to show you the before picture.

Now there were just the two big championship main event races to go. I took one for the team here and gave Sasha the good bike because I knew she had a better chance of winning. At the start there were about 20 mini bikes lined up at the start. The M80 immediately popped the master link on its chain, because with someone my size on it the oversize rear sprocket I fitted grinds the pavement in the corners. Sasha had a great race, though. After a slow start where Lossa jumped out front again, Sasha worked her way though the pack passing 2 or 3 people at the jump every lap. While I was hunting for a master link, she finished third (or fourth) and was the top finishing woman.

With a new master link, I was back in business for the second main event moto and itching to race. There was also a late entry rider on a mini Captain America Easy Rider chopper, a bike hilariously unsuited to this course. We all lined up again and took off in a slow-moving blur with a wave of the Jamaican flag by Ashley Nicole Shelton (a pinup borrowed from Camp Out Magazine).

Seeing as how I was actually in this race, I don't know all the details. I do know that Sasha did at least as good as the last race, and she lapped me at some point, possibly twice. Looking back at the pictures, it appears Sasha may have been able to squeeze by all but the lead rider to finish in second place!

I made it a point to take notes this time at the trophy ceremony like a good journalist, but I must admit BA moto's intergalactic point system is beyond my math abilities. I think it is bistromathic. (Any Hitchhiker's Guide to the Galaxy reference is a-ok in my book. -Ed.) Anyway, in third place overall was Marty on the pink pull start bike. Second place went to Jay LaRossa, and the intergalactic champion of the world is Jackson from Lucky Wheel Garage. Brady, the martian with the red metal flake helmet, got a special people's choice award. Possibly for being in every race and taking the jump no matter how jinky his bike was. Of course, we all already know Sasha is the women's (and female alien species) division champion from the headlines.

There are hundreds of pictures I just could not fit in here, but you can find them at my own Wordpress page: Part 1, Part 2. I cut together a little video covering the first two races with more of the pictures and what little video we had, so you can get a better feel for the whole thing.