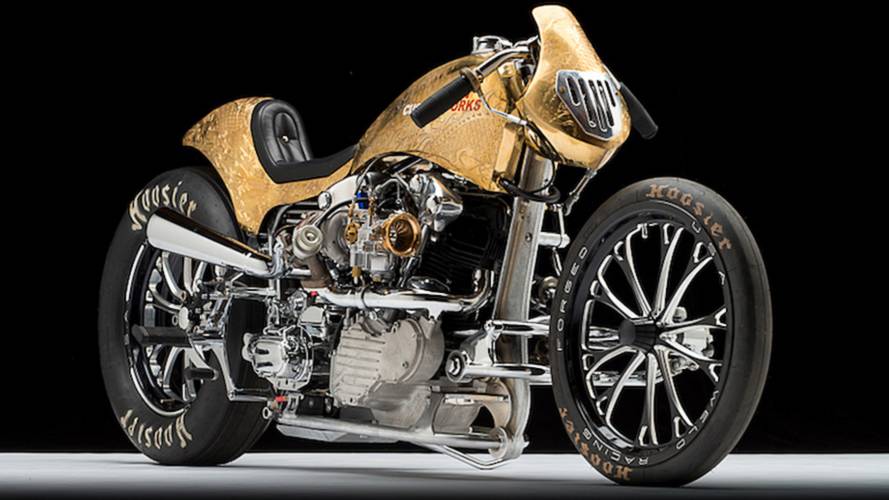 The talented Kyoto, Japan based Harley customizers CWZ take “motorcycle art” to the next level with this unconventional forced-induction knucklehead custom.

A blown knucklehead, an open primary, hand-etched bodywork, a front swingarm, and a name straight out of a Godzilla movie. What's not to love?

Custom Works Zon’s builds go above and beyond what most other professional customs shops would even consider – it’s baffling to think about how many man-hours were poured into this two-wheeled work of art. The kind of hard work and fanatic attention to detail evident in today's Bike of the Week have earned Yuichi Yoshizawa and Yoshikazu Ueda of Kyoto-based CWZ a reputation for producing world-class custom Harley-Davidsons.

Custom Works Zon has built a lot of impressive one-off Harley’s in their time. Despite an obvious appreciation for the American machines, the two builders still include themes and stylistic elements from their native Japan. For the Zonnegodin, this can be seen on the build’s engraved metalwork that sports several koi fish. The guys from CWZ explained how the bike’s inspiration was drawn from a tattoo of a koi and what the fish represents: knowledge, longevity, loyalty, courage, perseverance, etc.

There's so much going on with the Zonnegodin, a Dutch word that apparently means "Sun Goddess", that It’s hard to even know where to start. At its heart is a turbocharged S&S knucklehead (I bet that makes a noise - Ed.) married to a six-speed transmission. It inhales through a custom brass velocity funnel with a bespoke brass “Z Sun” air-cleaner cover piece), and exhales through a one-off, two-into-one chrome exhaust system. The whole thing is wrapped in a one-off frame built to support the bike's unique suspension.

READ MORE: Bike of the Week: Spirit of the Seventies’ KR750 Tribute

Instead of a fancy paint job, the tank, front cowl, tail-section, and a handful of other small pieces intricately engraved with traditional Japanese motifs. I'm not sure what the sheetmetal is actually made from due to the lack of info on the bike, but it looks like either brass or brass-plated steel. My favorite little detail on the bike is the wave design on the big secondary drive cover.

My grandpa had an old Japanese shotgun that he brought back from WW2 that boasted similarly beautiful hand-engraved metal. As soon as I saw this bike, I instantly thought of that old shotgun. Unbeknownst to me, Japan has a long and rich history of engraving and hand-carved metal work, making the engraved element of this build that much cooler in my mind.

The bike has the long, low stance so common to many Japanese customs, a look enhanced by the front and rear suspensions. I’ve seen some people refer to this two-wheeler as a “drag build” but I think that’s debatable.

Speaking of suspension, the Zonnegodin's setup is as unique and eye-catching as the rest of the build. Instead of traditional forks up front, CWZ went with a single-sided front swingarm with hub-centered steering. You definitely don't see front swingarms every day, and the inclusion of one on this build speaks to CWZ's dedication to unique details. The rear unit is also singe-sided, and was modified to accept a larger wheel. A trick mono-shock suspension unit beneath the seat was added to dampen the new swing-arm. The Zonnegodin sits on a set of bespoke wheels that were built specifically for this project, and each one is wrapped in a fat, white-lettered Hoosier tire.

The caliber of CWZ’s builds, combined with the popularity of H-D’s in the US, has lead to the duo displaying their work at Sturgis on a handful of occasions. The Zonnegodin was completed about two-years ago, and has since been invited to high-profile motorcycle shows all over the world including the 2017 Joints Custom Bike Show, 2017 Super Weekend, 2016 HotRod Custom Show, and the 2016 Skin and Bones Invitational. For those who don't know, the Skin and Bones Invitational is an annual motorcycle and art exhibition at the famous Buffalo Chip Art Gallery, organized and curated by world renowned photographer Michael Lichter. During its world travels, the bike has racked up an impressive collection of clearly deserved awards.

CWZ does a lot more than just build bikes, by the way. The shop’s website sells custom parts, clothing, and even complete custom motorcycles that have finished making their rounds on the global motorcycle show circuit. I highly recommend taking a few minutes to checkout CWZ’s website and looking at some of their other bikes.

In my opinion, the Zonnegodin is as much a work of art as it is a kick-ass motorcycle. Not only does it have an aggressive stance with beautiful lines and a unique silhouette, but where others like myself would see an ending point, CWZ saw blank canvas. So much work went into this bike that not giving it a Bike of the Week spot seemed objectively wrong.

If you know of a build that you think deserves to be RideApart’s next Bike of the Week, drop us a line at info@rideapart.com