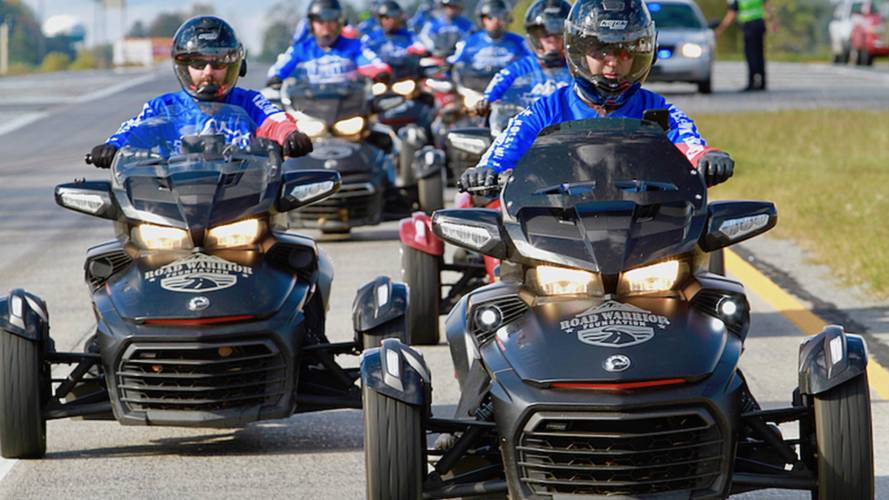 Can-Am has returned as sponsor of the annual Road Warrior Ride, which traveled this year from Austin, Texas, to Charleston, South Carolina. The ride, organized by the Road Warrior Foundation, provides “adventure therapy” to support military veterans.

By design, most of the vets on this ride were inexperienced riders who Can-Am felt would gain the most benefit from sharing the the thrills of the open road. The stable handling and gentle learning curve of the Can-Am Spyder adds a measure of stability and confidence that allows novices to enjoy the ride and share the experience with peers.

The group, which varied from 25 to more than 100 riders along the route, included participants from the American Legion Riders and Patriot Guard, with a number of police escorts along the way. The 2000-mile adventure was a certified hit with the veterans, and several riders said they planned to purchase a Spyder themselves.

The gathering began with a group riding tutorial at Wood’s Fun Center in Austin, followed by a practice run to Lake Travis along some of the best roads and scenery in the area. The real therapeutic adventure got underway the next day as the group rode 250 miles through the Texas countryside. They took the next day off to ride in some Can-Am off-road vehicles at Sabine Off-Road Park in eastern Texas. From there it was on to Louisiana and Mississippi, where the group hung out in the Delta and enjoyed some down home barbecue.

Headed for Birmingham, Alabama, the Warriors picked up more civilian and police escorts on the way to Barber Motorsports Park. Once at BMP, the riders were treated to a few laps on the race track courtesy of the Heart of Dixie Spyder Riders. The next day the group enjoyed some 60 miles of the Cherahola Parkway with a Spyder-mounted police escort as they rolled into Woodstock, Georgia.

At their final destination in Charleston there was a big old party where the new riders celebrated the ride, new friendships, and logged some long-term memories to carry home. The riders, Can-Am, and the Road Warrior Foundation expressed their thanks to all the Spyder owner groups, donors, police, and individual riders who helped along the way.