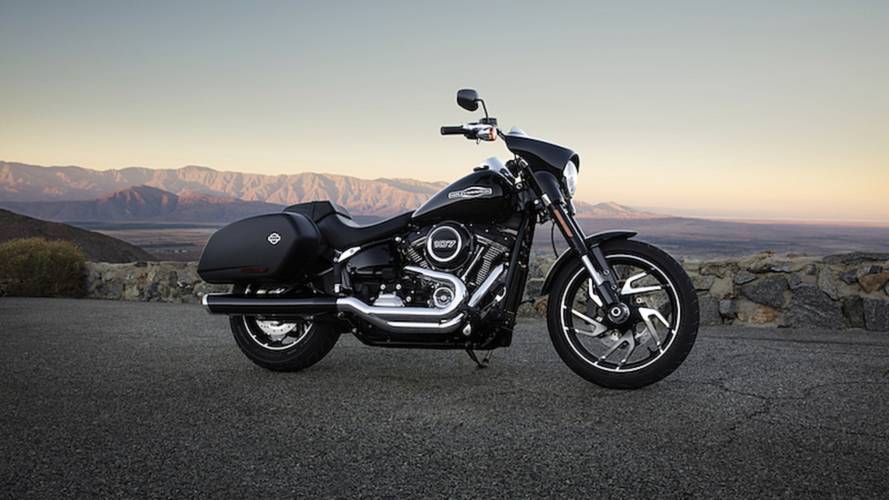 Harley rolls out a ninth member of the Softail family. Or should we say ninth and tenth, considering its chameleon nature?

Softail chameleon serves as two bikes in one

A quarter century after last appearing in dealerships, Harley-Davidson has brought back the Sport Glide, this time with the bike serving as yet another member of the all-new Softail lineup.

The 2018 Sport Glide looks a little different than it did back in 1983, when it was first introduced. Back then, it was known as the FXRT and billed as a touring Super Glide variant, using frame-mounted fairing and hard panniers. The model underwent a few tweaks over the next decade but was ultimately discontinued in 1993.

Twenty-five years later – and now looking oh-so-slightly like a Victory Vegas with Memphis Shades batwing fairing (RIP Victory) – the Sport Glide carries the “FLSB” letter code and offers considerably more style versatility than its predecessor. A late addition to the overhauled Softail lineup, the bike is built upon the same chassis as the Slim and appears to use the same 18.9-liter (5 US gal.) tank and tank-mounted clock as that model. Indeed, with the Sport Glide’s fairing and semi-hard panniers removed, it looks a bit like a Slim with Breakout touches.

RideApart’s Laura Llovet has joined a select group of journalists for a sneak preview test ride of the Sport Glide and will be sharing her opinion of the model soon. One would expect that it will perform similarly to the Slim and other members of the Softail family. That means smooth, torque-rich power delivery from the 1753cc Milwaukee Eight 107 V-twin engine, which is rigid-mounted in the frame, stiffening the chassis for better handling. Oil cooling around the hottest areas of the cylinder heads helps keep rider and passenger bits from roasting. Harley says the two-into-one exhaust enhances cornering clearance – claiming 27.9 degrees of lean on the right and 28.7 degrees on the left (compare that with the 31/32 degrees of the Fat Bob).

It is not yet clear whether the Sport Glide will be available with the 114 cu-in (1868 cc) engine, as is the case with a handful of Softail models. However, a Harley media release states that customers “can turn to Harley-Davidson Genuine Motor Parts and Accessories for Screamin’ Eagle Performance Stage Upgrades, from a Stage I Street Cannon muffler and enhanced intake options all the way to a Stage IV upgrade that takes displacement to 114 cubic inches and power through the roof.”

The real magic of the Sport Glide, however, lies in its ability to be more than one bike. With minimal effort, the commuting/light-touring rig can be transformed into a modern-styled cruiser. Again, one is reminded of of Victory and the whilom brand’s “Lock and Ride” system, which allowed riders to attach and remove accessories in seconds. Harley calls its system “HoldFast” and it is being used for the bits and pieces on the company’s Softail platform. Having seen it in action, it’s an impressive system; the screen on the Heritage Classic pops off with surprisingly minimal effort, transforming the bike into a much cooler-looking beast. In this case, though, I personally prefer the look of the Sport Glide with its batwing fairing attached.

“The Sport Glide presents the broad influence of Harley-Davidson design in a very contemporary way,” said Brad Richards, Harley-Davidson's vice president of styling and design. “In the new fairing... you can see the influence of the iconic batwing fairing from Harley touring models, but it’s been trimmed back to create a more compact, sporty shape.”

Riders seeking even more wind protection can exchange the standard 1.5-inch-high windshield for one that’s 5.5 inches high. The bags can be opened with one hand by a seated rider, according to Harley. Additional luggage capacity can be added via an accessory sissy bar upright, or luggage rack.

Cruise control comes standard on the Sport Glide. With a seat height of just 25.7 inches, few riders will have trouble putting both feet down at a stop light. LED everythings help give the bike more presence on the road. A USB charging port, keyless ignition, and the Harley-Davidson Smart Security System are standard features, as is ABS (kudos to Harley for not making that last one an expensive option).

The Sport Glide is offered in three solid colors: Vivid Black, Twisted Cherry, and Silver Fortune. Prices have not yet been released but an educated guess would place it somewhere near the Heritage Classic (which starts at US $18,999 / £17,995).