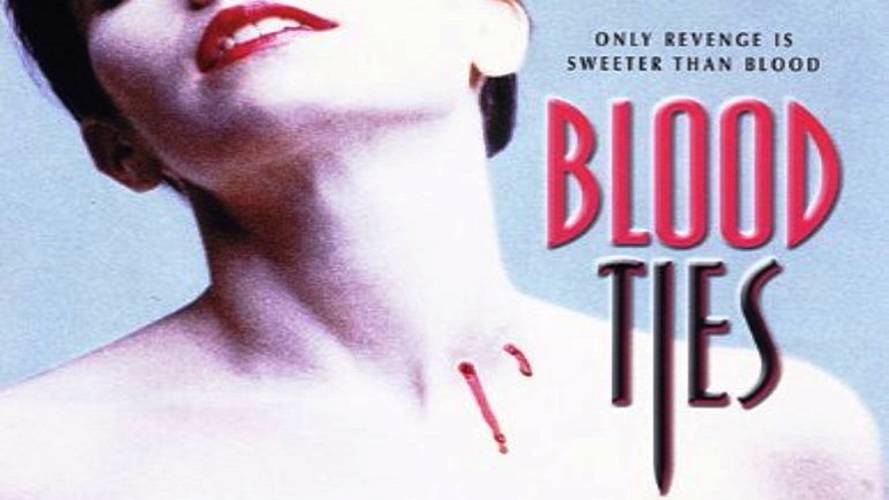 Blood Ties is a vampire-riding motorcycles movie that is equal parts cheese and low budget comedy. So, check it out in our weekly Moto Movie Review.

A KKK-like group is hunting vampires, and the vam... Carpathians, are just fighting to survive and enjoy the 1980s with their motorcycle gang in this Lost Boys knock off. This made for TV, cheesy biker/vampire film is more enjoyable than it has any right to be, and seems as if it might have been a failed pilot for a weekly series, but it's getting reviewed anyway, so here goes...

The shoulder pads in 80s suits are pretty much the same as CE approved motorcycle armor.

Blood Ties is a cross between Lost Boys and Kolchak: The Night Stalker, and is just as much fun to watch as either of them. It doesn't quite qualify as a horror movie, or a comedy, but there are funny moments, and it does involve a multi-generational family of blood suckers from Carpathia. The older Carpathians are well-off men in the business world, while the younger generation are a hell raising motorcycle gang who call themselves the The Shrikes. The story starts when a young man named Cody travels to the city to find his distant relations, after his parents were killed by the Southern Coalition Against Vampirism.

Be afraid of the neck beard and a bug-eye man in a windowless van...

It seems the Carpathian American diaspora in Long Beach, CA are actually undead blood suckers (they consider vampire to be a racial slur). They are not immortal, per se, but they do live to 150 years old, are 20-30% stronger than normal humans, and prefer the night. They heal much faster than normal humans, and the preferred method of killing them is a stake through the heart, though as Harry says, getting hit by a bus would probably do it too. Still, the Shrikes do ride as if the only way they are going to die is in a freak accident with a picket fence.

Rotten Tomato Rating: No critical rating, but the audience approves with a 63% positive rating.

RideApart Worth Watching: A solid 7 out of 10, especially on a Halloween night.

Redeeming Quality: Solid riding (by the actual actors) and a nice assortment of late 1980s Hondas, of every style and displacement. There may only be 2 or 3 real impressive stunts here, but the riders on the bikes do pull wheelies, and slide sideways, and jump down a flight of stairs. There was no helmet law in California at the time, and why would the undead wear safety gear? So you can see that the people doing the riding are the actors themselves. The ride everything from a 1st generations Honda Shadow, to a Nighthawk S, to a Super Magna, to a Transalp. The leader rides a Harley-Davidson FXR.

There is one awesome stunt during the final confrontation between the Carpathians and the hunters. A young Shrike jumps a dirt bike into the windshield of the moving van headed right for him. As far as I can tell, the stunt men really did this too, with the van swerving to not hit the rider, and the rider hoping the bike didn't bounce off the van and land on top of him. It's at about 1:22:10 if you want to jump ahead.

Worth Noting: Just like Tyrell in Blade Runner, and The Monarch in Venture Brothers, the head Carpathian lives in Frank Lloyd Wright's spectacular Ennis House. Back in the 80s and 90s it was just a huge weird house that no one wanted to live in, so it was used in a lot of movies.

If you dare to enter, you can watch the full movie on YouTube here or below...