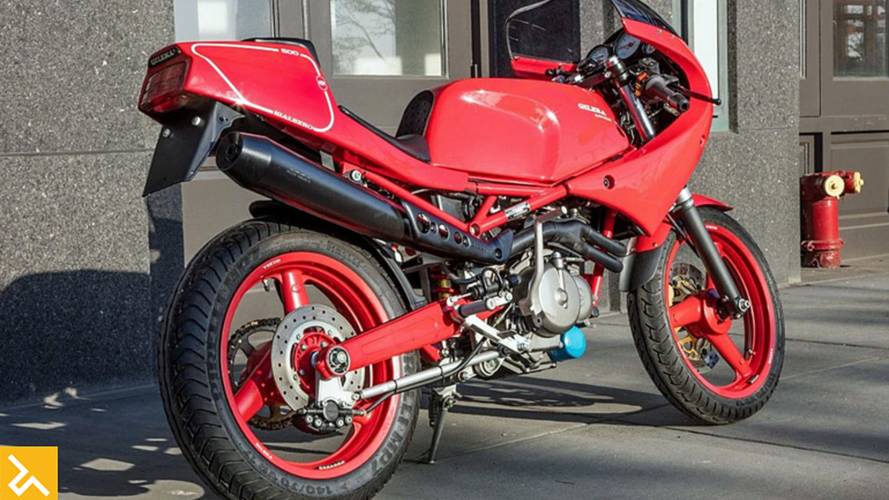 Regular readers of this site should be familiar with the Matchless G80, the classic British single which was built between 1946 and 1966. What you may not be familiar with is the Harris G80, a 'new Matchless G80' developed by Les Harris after he decided to stop making Bonnevilles under license.

The "Harris G80s" were launched in 1987, and the components were interesting. 497cc Rotax Single (with a left side kicker), Paioli suspension, Dell'orto carb, Lafranconi exhaust and Brembo brakes. It used an oil-in-frame design and was offered in silver, black, or the metallic burgundy that you see in front of you. Sales weren't great and it went off the market in 1990. For more on the Harris G80, check out this profile from Real Classic.

This example (VIN: SMMG50402JN223636) has less than 20 miles and it's claimed to be in near new condition. The tank has been repainted because a spill of some sort damaged the paint. The turn signals have been replaced and the fuel petcocks have been upgraded. Find this Rotax Matchless for sale in Townville, South Carolina with an opening bid of $3,985 here on eBay.

Some Cushman enthusiast has accumulated 34 scooters spanning 56 years of the company's history. You'll also get thousands of extra parts, boxes of original literature, and signs up to 8 feet long. Now he wants to get rid of it all in one fell swoop. Feel like starting a Cushman museum?

The seller has two wheel scooters, three and four wheel service carts, and pretty much everything else that Cushman made. I don't know much about the brand, but he also claims to have a couple of very rare items like #780 Trucksters and one of two known SHOE sidecars. He's also got some other stuff for sale (like a Harley-Davidson Topper), but this is obviously for a Cushman fanatic.

Find this impressive collection for sale somewhere in Florida for $90,000 here on Craigslist.

The seller of this Rapide says the bike has been given a "light custom treatment with smart usable upgrades" that also happen to make it look like a Black Shadow. In his or her mind, it's for someone that wants the Black Shadow look without Black Shadow prices. Do you agree?

This Rapide (VIN: F10AB18128) was upgraded with the front brakes and center pull brake cables from a Lightning, extended cam arms, Amal Concentric carbs, extended intake manifolds, Alton alternator, and a 12V electrical system. It also has a 5" Smiths chrono speedometer that goes up to 150 miles per hour, even if the bike doesn't.

The sale comes with a letter from the Vincent Owners club that verifies the authenticity of the bikes components and confirms that the engine is from a '52 Rapide. Find this Black Shadow wannabe for sale in Port Orange, Florida with bidding up to $30,600 and the reserve not yet met here on eBay.

The last time this race rig competed, it won the sidecar class of this year's Pike's Peak Hillclimb. Previously in 2016, it competed in four other races and it has placed either 1st or 2nd each time. So if you've been looking to get into three-wheeled racing, it'd be hard to go wrong with this.

Find this racer for sale here on the team's website for $12,000 or best offer - I believe the rig is in San Francisco, California as that's where the team is based.

When Gilera introduced the Saturno in the 1940s, it was one of the best motorcycles you could buy. The problem for most riders is that the cost reflected it - Motorcycle Classics said they sold for the approximate price of a small Italian apartment in the day. The model name (and the iconic red color) were very special to Gilera, so when the firm decided to create the new Saturno (at the request of their Japanese importer), you can believe that they wanted it to be special. The original production figures were supposed to be 1,000 bikes in Japan and 100 bikes in Italy. While Gilera eventually ended up offering the bikes in more countries, none were officially sold in the US. But here's an example that's just made it to New York with only 45 miles on the clock.

In the 80s, Gilera had developed a 4-stroke water-cooled single that they used for their off-roader Dakota in 350cc and 500cc guises. The engine was quite advanced and featured dual overhead cams, which was part of the reason why the motor was named the Bi4. Gilera's Japanese importer requested that the company use this engine in a road bike, so the idea for a modern cafe racer was born. The Bi4 engine was thrown in a trellis frame and paired with Marzocchi suspension, Brembo brakes, and Marvic wheels. 45 horsepower was plenty for a bike that weighed less than 320 pounds, yielding a top speed of 115 miles per hour. I think this bike is beautiful in a very 80s way, particularly thanks to the the half fairing, siamese exhaust, and 3-spoke wheels. For more on the Nuovo (New) Saturno, check out this review from Classic-Motorbikes.

This example (VIN: 222100678) shows just 45 miles on the odometer, and it's claimed to be in "out of the crate perfect condition." The seller kept this bike in Germany before he was able to legally import it this year. It comes with the original German registration and US customs paperwork. Find this Gilera Saturno 500 Bialbero for sale in New York, New York with bidding up to $4,050 and the reserve not yet met here on eBay.

My favorite's got to be the Bialbero. What about you?