Baggin' Waves - San Diego to Seattle by Land and Sea 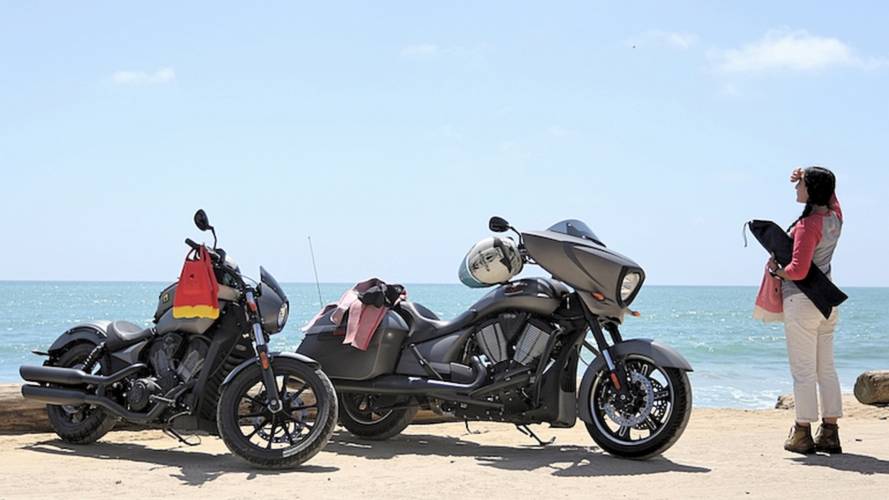 Justin and Kyra travel north up the US coast with only the essentials: clothes, a camera, and – of course – an inflatable surf mat.

Have inflatable surf mat, will travel

How do you combine your passions? Knitting and craft beer, easy. Classic cars and Sunday morning coffee? Done. But surfing and motorcycling? Seems like a tougher task to accomplish (Well, not too tough – CC). Which is why Kyra and I have set out to prove everyone wrong. Yes, you can travel on your motorcycle – great lengths I might add – while enjoying the ocean at the same time!

Developed by the ancient Hawaiians, a paipo (meaning short or small board) is a plank of wood people would ride waves on, prone, before attempting to stand on the longer alaia boards. Actually, there’s been a massive resurgence in interest surrounding the paipo. Jon Wegner is making some spectacular ones. And along with the paipo, people seem a bit more interested in body surfing these days, no doubt a result of Keith Malloy’s beautiful photo book and feature film, The Plight of the Torpedo People and Come Hell or High Water. But “proper” surfing is still the mainstay of most aquatic activities you see these days, with people purchasing ever more bespoke wave-riding devices in attempting to stand out in the inevitable crowd.

I’m one of them, though a bit less bespoke. A longboard-toting van owner. Built to haul shit all around America, my 2008 Ford E-150 Econoline is everything a surf bum dreams of. It has a bed built into the back, plenty of room for my “proper” surfboards, a little cubby full of clothes, a V8 engine and the kind of ambiguity that comes only with a white cargo van. Most of the surfing I’ve done in the last few years has centered around my ability to get somewhere, stay the night, surf, then go home. It’s ideal, really – allowing me to “camp” and surf at my leisure all over the country, without a lot of hassle. But maybe it’s too easy? Maybe, I should make things interesting – instead seeking out surf by way of motorbike. But how in the hell is that going to happen?

Years ago, my friend, Shawn, proprietor of the online surf shop Stoke Harvester, suggested we purchase a pair of inflatable surf mats and make a movie.

“I can’t wait to see the look on everyone’s face,” he said.

Unfamiliar with this sort of wave riding apparatus, I Googled. There wasn’t much information available – not at that time, anyhow. So, I canned the idea until, one day, while browsing a Southern California surf shop with my old man, he pulled a three-foot long nylon sack off a rack and stated: “I’m going to get one of these. I think it would be fun to pack on my motorcycle.”

What he was referring to was a Krypt Surf MT5 inflatable mat, and his idea to pack it on his motorcycle was pure genius – even if I knew he might never do it.

I’m a motorcyclist through and through. As much as I love to surf, I spend more of my time these days riding atop a bike than a board. And that’s alright. I love everything about it (enter poetic waxing about wind in your hair and wheels beneath your butt, or whatever). But when I’ve ridden past any one of my favorite surf spots – Malibu, Cardiff (Not to be confused with Cardiff – CC), Trestles, Pleasure Point, and plenty in the Pacific Northwest – I can’t help but feel like I’m missing out on something.

I sent an email to a friend at Victory Motorcycles prior to its unfortunate departure from our industry; I had an idea. Kyra and I were planning to attend the World Superbike race at Laguna Seca just outside of Monterey, California. We were going to drive the van down and catch some waves on the way. But seizing an opportunity, I suggested instead we pick up a pair of bikes in Southern California, load our wetsuits, swim fins, and inflatable surf mats onboard, then head north – riding and surfing our way from So-Cal to Seattle, with a brief stop at Laguna Seca to take in WSBK. My friend agreed, and no more than a week later, Kyra and I were handed the keys to a Victory Octane and a Cross Country, the latter of which is clad with hard cases (perfect for hauling all our gear) and a stereo system (Don’t knock it till you try it!). We pack light, so the lack of luggage on the Octane wasn’t an issue. Kyra secured a Wolfman Luggage tank bag to the top of her bike while I loaded a pair of small dry-bags into each pannier, then strapped a roll-top dry duffle to the tail. Ready and eager to get on the road, we peeled out of the parking lot and made our way to the first spot I had planned to surf: San Onofre.

San Onofre sits just south of the quaint oceanside town of San Clemente. For those unfamiliar, San-O is nothing more than a long stretch of sand and shrub brush ending at the Pacific Ocean. But for those that surf it’s paradise, offering an endless array of peaks and peelers – with plenty of beachside parking. Our first surf spot was the perfect way to test our theory and encourage us to continue. Come evening, with San-O and a beautiful sunset in our mirrors, we worked our way out of Orange County then through Los Angeles, staying off the interstates and instead dragging our feet along the Pacific Crest Highway. Edging the city, riding north through Long Beach, Santa Monica, and Malibu, we eventually escaped Los Angeles County with our tires pointed toward the Pacific Northwest.

Now, you’re probably wondering what we packed and how two people can travel 10+ days on motorcycles with nothing more than a few bags. Or maybe you’re a minimalist and all of this makes perfect sense. Either way, I’ll explain: limiting ourselves to only what we’d wear while riding the bikes with enough warm weather gear for when we were off, we managed to fill the saddle bags with nothing more than essentials: clothing, computers, and a bit of camera equipment. Oh, plus a pair of toothbrushes. In the roll-top dry duffle strapped to the tail were two pairs of DaFin swim fins (the absolute best), along with two hooded 5/4mm wetsuits, the inflatable surf mat I borrowed from my father, a changing mat from Trailmaster Adventure Gear and the Cloak of Stoke: a towel robe Kyra and her mother made which turned out to be perfect for changing in and out of a wetsuit while standing on the side of the road next to a motorcycle.

Our next stop was Ventura, a traditional Southern California city with a bustling Main Street – lined on either side with shops. Stopping for lunch, we spent an hour browsing Iron and Resin – a surf-and-motorcycle-inspired store in the center of town – then continued north along Highway 1. A dense marine layer stretched out in front of us in the evening. The next day, we continued up the coast to Santa Cruz where I managed to get a wonderful sunset surf session at 38th Street, not to mention the ride along Highway 1 was nothing short of breathtaking!

We crossed the Golden Gate Bridge, split lanes through San Francisco, then rode inland a bit to scrape off some time. As we climbed the Siskiyou mountain range, our rumbling American V-twins pulling us up mountain passes with a graceful ease, we stopped in the tiny town of McCloud, California, to visit a few friends and check out an abandoned lumber mill. After an evening of tacos and good times, we popped back to the coast in southern Oregon, so I could shred a few waves in Pacific City. The bikes rode beautifully – cruise control on the Cross Country made the miles melt away, while Kyra muscled her way through traffic aboard the Octane. The weather was also wonderful, and we were lucky enough to score a bit of swell (surf slang for waves) along the way. Damn, this was a good idea!

The remainder of our ride was rather uneventful, albeit stunning. Coastal Oregon is remarkable and the small towns that dot the western edge of America are wonderful places to stop for a night, or stay for a week. We took our time, twisting through dense evergreen forests, across golden terraces and eventually into the heart of the city we both hail from: Seattle.

In the end, our surf mat motorcycle mission worked out wonderfully. In place of a gas-guzzling van, we rode a pair of American cruisers, which hauled both our gear and our butts from Southern California all the way to Seattle. Instead of big, heavy surfboards we’d need to lug around from spot to spot, we huffed and puffed into a nearly indestructible surfing sack on top of which we caught countless waves. And although we might have enjoyed the creature comforts that come with living the #vanlife, it was pure fun pitching a tent next to our motorcycles, knowing that the next morning spelled more surf and more miles.