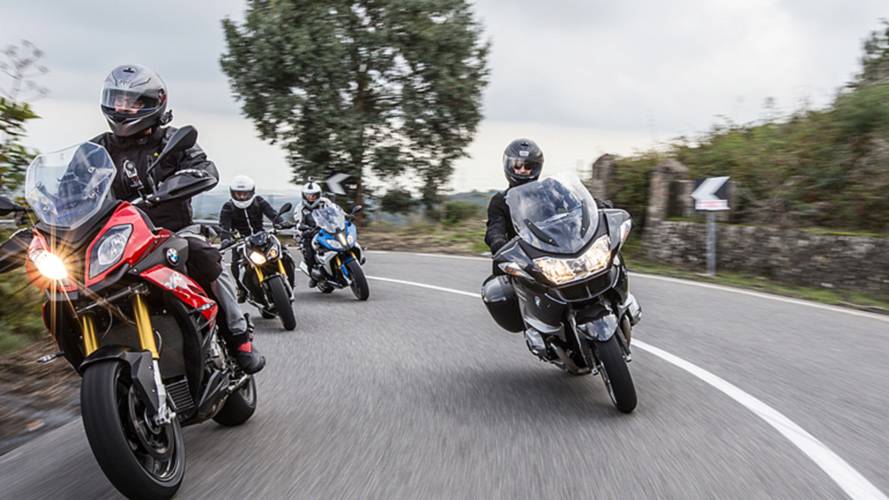 Is it the tire or is it the bike? Honestly, most of us don’t see the breaking point of a typical street tire very often, and if you do, it usually doesn’t end well. But on the other hand, if you have a fast-as-hell bike like the new BMW S 1000 XR, are you really going to throw cheap tires on it? Picking the wrong tire can be a pain in the ass with poor mileage, limited traction, a hindered ride, and overall just limits your ride potential. With a bike as badass as the XR, can you even judge a tire’s performance or are you just judging the motorcycle’s? We flew to Italy to find out if Metzeler’s new Roadtec 01 is better than the bike it’s mounted on.

hell yeah, this was fun.

Full disclosure: Metzeler loves to spoil us. We flew to Italy to check out their testing facilities in both southern and northern Italy. After something like 25 hours of travel, we passed out for a short nights sleep in our 17th-century beachfront castle turned hotel/spa (yeah, I’m bragging) outside of a small town, which bore a name I was too groggy to remember (Palazzo Corvaia, thanks Google). We—the small group of American and Japanese journalists—awoke the next morning to the cobblestone entrance filled with new bikes. There was a BMW R 1200 RT, S 1000 RR, S 1000 XR, K 1600 GTL, along with a couple year-old models like a Honda NC700 and Suzuki Bandit. Just the selection of bikes alone immediately conveyed the prowess of the Roadtec 01 Interact. It’s a tire that’s designed to do a lot of different things for a variety of different bikes.

The Roadtec 01 Interact is the new and improved version of the Z8, and just like the new cruiser tire, the ME880, which replaced the ME808, Metzeler set out to make this new tire outperform its predecessor in mileage and wet weather performance. What makes the Roadtec’s technology unique is the wide variety of applications and riding styles it works with. The ME888 Marathon Ultra is mostly a cruiser tire seeing cruiser-type riding, but the Roadtec is designed for bikes like the S1000 R, S 1000 RR or the gigantic K 1600 GTL— three separate bikes with individual specs, riding styles, and sizes within one brand.

Along with the wet-weather handling and mileage gains, the Roadtec also has a lot of dry riding performance abilities. Because, come on and admit it: A guy who rides an XR is going to have a little more lean angle to worry about than the guy on the FatBoy with floorboards. So, while the ME888 and Roadtec 01 Interact have similar advancements, they are far from similar.

The Roadtec front tire’s top layer is 100 percent silica to add performance under braking; this is helpful since the front tire is doing most of that. Out back, braking is important, but this Metzeler had to be very conscientious of acceleration, slip, and even advances like TC (Traction Control). The center of the rear tire is a combination of silica and carbon black, as this combo makes for a stiffer, less abrasive compound, which results in more miles. The two outside strips are 100 percent silica; this provides better grip when leaned over, because— and this should be obvious —you’re on the center of the tire more than on its sides.

Our selection of bikes weren’t just non-dirt worthy adventure bikes, but instead they were eat-up-a-crap-ton-of-miles performance bikes. Now, I concentrate a lot on the BMW XR in this review, because, after riding all kinds of bikes on the trip, the XR was by far my favorite and this was my first experience with the new BMW. To me, this was the bike that allowed the tire to shine the most. To read our latest review of the XR, click here.

Motorcycles have come a long way haven’t they? I know I sound like an old fart with that statement, but a lot of modern motorcycles can either rocket you to the moon with performance, or make you feel like you have astronaut-level skills even though you’re actually piloting an old refrigerator box.

Confidence-inspiring models like the XR make you feel amazing, no matter how fast you’re going and that’s a good thing. Because unless I’m in a real race, I don’t always care how fast I’m actually going, but I do want to feel fast. I want to feel the bike communicate with me, and inspire me to push harder. A pure race tire or slick doesn’t care how good you feel, so if you aren’t at the Jonathan Rea or Buzz Aldrin level, you won’t feel that comfortable when riding. As for the Roadtec 01 Interactive, it gave me a ton of confidence as we zig-zagged into the elevation above Sicily. The bike always provided good feedback and it always felt planted while leaning into or gassing out of a corner—even though conditions were less than ideal.

The first leg of our Italian journey took us up and over Mount Etna, a ski resort during the winter. We ventured to the top, fighting off light rain, fog and sub-40 degree temps. We started out through historic Italian towns— southern Italy appeared frozen in time with its torn roads and 17th to 18th century architecture. We zig-zagged around beautiful rock-filled hills and into a forest that resembled the US’s north-west region. Through the tall trees was a large opening where the black asphalt road matched the surrounding rock. It was the first time I’d experienced such a landscape.

Mount Etna is considered one of the most active volcanoes in the world, having had its most recent eruptions only a few years ago. We stopped to look up at the lava’s river of destruction through the tree line. It was a beautiful and eerie site. This was also to be the time I had to give up the XR for another BMW.

Like the compounds in the rear tire, the internal steel bands in the center of the tire are stiffer than those on the outside. The inside bands are tuned to provide additional support/tension to decrease flex and fatigue—increasing mileage in conjunction with the compound. Metzeler calls it the Multi Zone Tension Steel Belt, which essentially means the center belt is a particular construction with a specific tension, but the outer two belts are of a different, softer (my word, not Metzeler's) build to enhance the cornering performance. But don’t think of yourself as the badass riding more miles on the edge because just like the ME888 Metzeler, the Roadtec 01 is designed to wear more evenly, extending its life.

The tread pattern is also improved on the 01, with steeper angles on the front tire grooves, which disperse water better in wet weather.

Again, the variety of motorcycles we were given to ride spoke volumes as to what the Metzeler tires were all about. The high-end of the spectrum, analogous to the BMW’s, but coupled with the older Honda NC700 and Suzuki Bandit (modest motorcycles that are designed for the performance-conscious riders who don’t have a lot of money), Metzeler displayed the wide range of uses. The Honda and Suzuki are for those riders that want a steal of a bike, or for the forum-junkies always searching for a home-remedy motorcycle fix. They are also for the riders that want performance without the price tag associated with a name brand.

While it was fun tearing through the woods on the S1000RR and XR, it was actually almost as fun, and more comfortable, to do it on the Honda (I didn’t have a chance to ride the Suzuki). Was it the Roadtecs elevating the bike’s performance? Maybe, but it definitely aided me in pushing the bike to go faster. I could occasionally feel the soft front forks communicating the wrong things back to me mid corner, losing a little bit of my confidence, but I never lost any contact with the road. I jumped onto the Honda as we’d ventured back down the mountain into a cloud of fog, onward to Metzeler’s southern testing facility.

In a nut shell, the Metzeler Roadtec didn't detract from the bike’s performance, and in fact, allowed it to reach full potential. The better tire for the more challenging bike elevated the experience, and the better tire on the better bike allowed it to work as well as it should. Is it the bike or the tire? In this case it’s both.