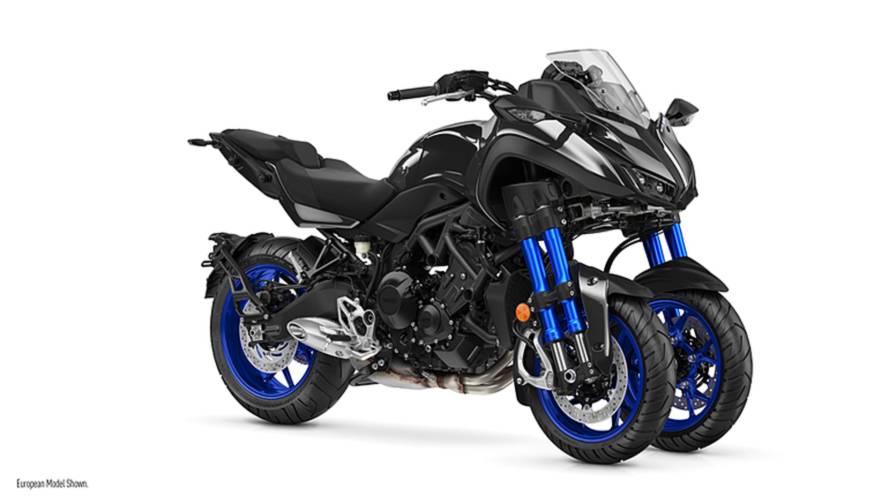 Yamaha presents "the world's first 3-wheel leaning motorcycle" for sale in the United States this summer.

Yamaha calls their weird new Niken tri-wheeler the world’s first three-wheel leaning motorcycle. Unveiled recently at the Tokyo Motor Show, the radical design did create quite a kerfuffle of controversy. I imagine you're asking yourself: "What's the deal with the Niken and when can we get it here in the states?"

According to Yamaha's announcement at EICMA 2017, it looks like the Niken is coming to America sometime in summer 2018. Here's what we know so far:

The MWT-9 concept first appeared at the Tokyo show in 2015. Niken means "Two Swords" in Japanese, and originates from 17th century Japan when the two-sword style of swordsmanship was first invented. It proved to be a revolution and marked the beginning of a new era in combat.

Yamaha believes that the Niken will open up a similar revolution, but this time in riding rather than swordplay. The company compares the experience of thrashing the Niken along winding roads to the thrilling experience when carving turns with skis.

“The advanced Yamaha-exclusive technology used in the double leaning front wheel layout offers high levels of traction – making it a strong performer in corners and giving the Niken rider the ability to carve through winding roads with unmatched confidence," says Yamaha. "And two front wheels means there are two front tires and two sets of front brakes, so the levels of traction and braking are also like nothing else on the road.”

Yamaha asserts that its engineers have gone to great lengths to ensure that the character of the Niken is similar to that of a conventional motorcycle, and that the majority of riders will be able to move seamlessly from a two-wheeler to the Yamaha leaning three-wheel system without having to alter their riding style. But as soon as they enter into a corner, Niken riders will feel growing levels of confidence and enjoyment – offering more fun with less stress.

The Niken’s sporting character starts with its engine, a torquey, 847cc three-cylinder mill sourced from the MT-09. The frame combines steel and aluminum to achieve a balance of straight-line stability and cornering performance. The head pipe area is manufactured from cast steel, the swingarm pivot area is aluminum, and the main frame connecting these two assemblies is made from steel tube. By delivering the required levels of strength, rigidity, and flexibility precisely where they are needed, this hybrid design enhances the planted and natural feel of the leaning double-wheel front end.

The swingarm is 15mm longer than the MT-09's, and the increased length reportedly improves stability in cornering. The Niken rider sits about 50mm further back than on the MT-09, which provides a 50/50 front-rear weight distribution. The doubled inverted forks give the trike a 45-degree lean angle, using an Ackermann dual-axle steering mechanism and a cantilevered suspension system mounted to the outside of the wheels.

Front and rear suspensions are adjustable for preload and compression and rebound damping, which helps keep the bike firmly planted. The double 15-inch front wheels are fitted with 120/70R15 V tires specially developed for the unique requirements of the vehicle, and offer high levels of grip, abrasion resistance, and wet-weather capability.

To suit the unique requirements of the Niken, the engine is equipped with special fuel injection settings designed to enhance performance in the environment that it loves: twisty mountain roads. There's also a newly designed crank that gives excellent ridability and smoother starts when accelerating from a stopped position. The Niken sports an array of electronic controls, including a YCC-T electric throttle, D-MODE variable throttle control, cruise control, and a Traction Control System. The Niken also sports an A/S (assist and slipper) clutch and Quick Shift System which give a high degree of controllability in varying riding conditions.

The 4.8-gallon aluminum tank gives a range in excess of 186 miles, offering the Niken rider the ability to cover large distances with minimal fuel stops. Yamaha is convinced that the three-wheeler’s reassuring feelings of stability and control inspired by its double front-wheel layout are sure to attract many experienced riders who are looking for a new kind of vehicle. We shall see.