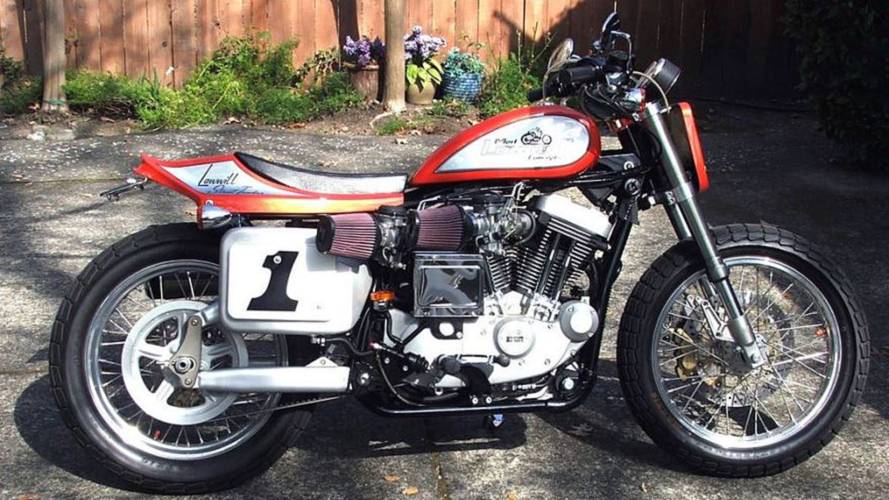 This weeks edition of Bike-uriousities takes a look at a Mert Lawwill H-D Street Tracker, an MZ 1000S, a clean Moto Guzzi Stornello Sport, an even cleaner CR250R and a folding Kit Kat scooter by Italjet.

In 2005, Mert Lawwill bought up 20 Harley-Davidson Sportster XL1200R motorcycles to use as the base of a limited production run of Street Trackers inspired by his XR750 Flat Tracker. Thanks to a bevy of custom parts (like a hand-crafted 4130 chromoly frame), Mert was able to shave off over 100 pounds from the donor Harley. Over a five year period, Mert Lawwill Concepts apparently cranked out 19 bikes - here's number 14.

The work was impressive, and it included replacing the cylinders, heads, exhaust, cams (Megacycle), and ignition system - plus the addition of a dual carb setup. Even the frame was replaced - there are very few original Harley parts left on this build. I particularly enjoy the dual swingarm, fully adjustable Penske rear shock, and the right-side number plate which actually functions as the oil tank. The rear suspension/swingarm design actually pushes the front end down during acceleration.

Now that the engine displaces 1,400cc, this example dyno'd at 96 horsepower and it's really sweet. Find this Lawwill Street Tracker for sale in Sonoma, California with bidding up to $15,100 and the reserve not yet met here on eBay.

Honda started building the CR250R in the 70s, but in 1997 they switched to an aluminum frame. Over a 34 year period, the CR became a legendary dirt bike - in fact, it is the winningest dirt bike in US history, in terms of championships.

2002 was the last evolution of the breed, before Honda killed their two-strokes in 2007. The second-generation aluminum frame was a standout, but revisions to the motor were slightly underwhelming. For more on the CR, check out this article on Dirt Bike. They call it "Honda's Greatest Bike Ever". They also say that the 2000-2001 examples are the ones to buy, but this example is a little different as it was built up to compete in the Texas State Enduro Championship.

This bike (VIN: JH2ME03383M506818) was run for just 10 hours before it was built up as a racer 12 years ago. For some reason it never got to compete, and it sat in storage. There's lots of excellent components - new Honda factory cylinder, FMF Gnarly Pipe, Q-Stealth silencer, 10oz Steahly flywheel, Showa suspension with Works Performance internals. It also comes with a spare new Wiseco crankshaft but it wasn't installed as the original was just about new. The seller says this bike is basically a brand new 2003 CR. Find this Honda for sale in Houston, Texas for $4,400 here on Craigslist.

The Kit Kat was Italjet's solution for people who enjoyed flying and boating but then found themselves at a destination without wheels for land. It weighed just 73 pounds, so you could even throw it in the trunk of your car if necessary.

It featured a 2.2 horsepower 49cc two-stroke engine paired with a 1-speed transmission through an automatic clutch. Check out this "personal-use report" from the Feb 1972 issue of Popular Science:

This example is said to run great and need nothing, so find this Kit Kat for sale here on Craigslist for $795 or best offer in Daytona, Florida.

In 1960 Moto Guzzi set out to re establish itself in the most profitable Italian market segment by introducing the 125cc Stornello. Using a brand new Four-stroke pushrod Single, the Stornello made an instant impact in the eighth liter class of Italian bikes. In 1961 Guzzi added inclined valves and a hemispherical combustion chamber (yes, it’s a hemi) that made a significant boost in horsepower and top speed. The Stornello line continued until 1974 and was re introduced in 2015 as a model of the venerable V7.

The Stornello Sport was easy to discern from the regular model by the clip on bars and cafe racer seat. The Sport version used a 125cc air cooled Four-stroke overhead valve hemi Single that produced 8.5 horsepower. When coupled with a four speed transmission, hydraulic suspension and a very good frame the top speed was in excess of 66mph.

Someone in Latrobe, Pennsylvania apparently loves the MZ 1000S, as just 30 were imported to the US and this is the second he/she has had for sale recently (here's the first). The 1000S was MZ's first superbike, built after a Malaysian group took over the company in 1996 and immediately swung for the fences.

Despite the superbike aspirations, the 1000S was more of a sport-tourer by the time it hit the market. The 999cc engine produced 117 horsepower and 72 ft-lb of torque. Finding parts for a rare bike isn't easy, but Graham's Motorcycles in Britain has assumed the role of worldwide distributor, and you can get nearly everything you need in a week's time.

The Lawwill Street Tracker has got to be my favorite - which one do you like?