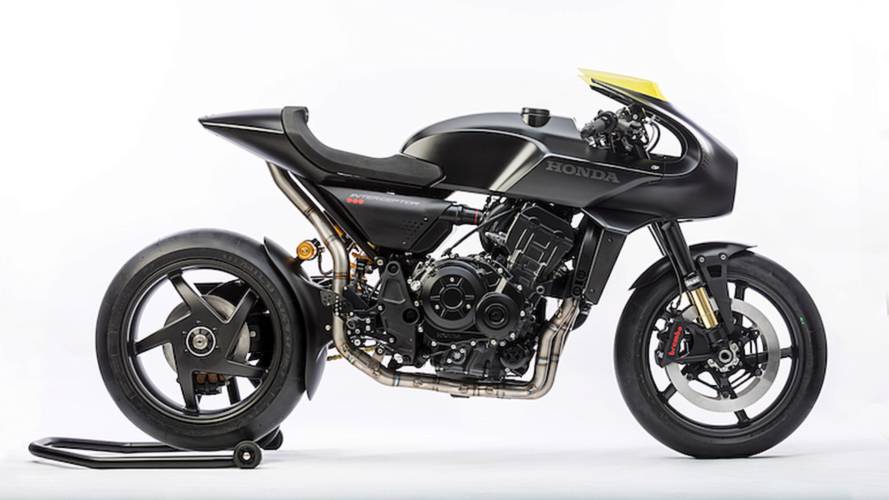 Among the many attention-getters at the EICMA show in Milan this year is the Honda CB4 concept, a product of the company’s design studio in Rome. Based on 2015's CB4 concept, the Italian influence over this futuristic cafe racer is evident in the union of a few sharp edges with the shapely contours of the bodywork.

Although the CB4 carries the Interceptor model name, it bears no resemblance to the first VFR Hondas of the early 80s. This framework harkens back to the original CB400F of the 70s – a lightweight, purpose-built street scratcher with minimal frippery. According to Honda, the newest configuration concept adds, "an evocative ‘Sport Endurance’ tone to the original design language of the CB4 Concept, creating a new perspective on the world of the Café Racer, on which the series is based."

The bike's color scheme is ‘total black,’ combining elegance and sportiness while leaving room for a futuristic technology integrated into the flowing design lines. Among the concept's sci-fi features is a fairing-mounted fan that converts the motorcycle’s kinetic energy into to electricity. That electricity then powers the bike's tank-mounted infotainment touch-screen. The screen provides constant connectivity, allowing the rider to follow the road through digital maps, make emergency calls, or simply to connect devices.”

The chassis appears to have a curved upper backbone, which may or may not hold fuel, and uses the engine as a stressed member. Bolted to alloy side plates that carry the single-sided swingarm. Suspension is Ohlins at both ends, with Brembo brakes on solid dual discs at the front.

The Interceptor's cafe fairing blends almost seamlessly with the tank cover, and flares slightly over the radiator shroud. The high rear-set footpegs, set directly below the center of the seat, and flat handlebar suggest a track day rider’s dream machine. The exhaust pipe hugs the subframe and exits in a contoured tip shaped to the the tail section. The patterned LED taillight sits just above it. Interestingly, the lettering on the tail reads 1000R. Hmm.

Is the CB4 merely a design exercise, built to show off the talents of Honda’s engineers and stylists? We damn sure hope not.