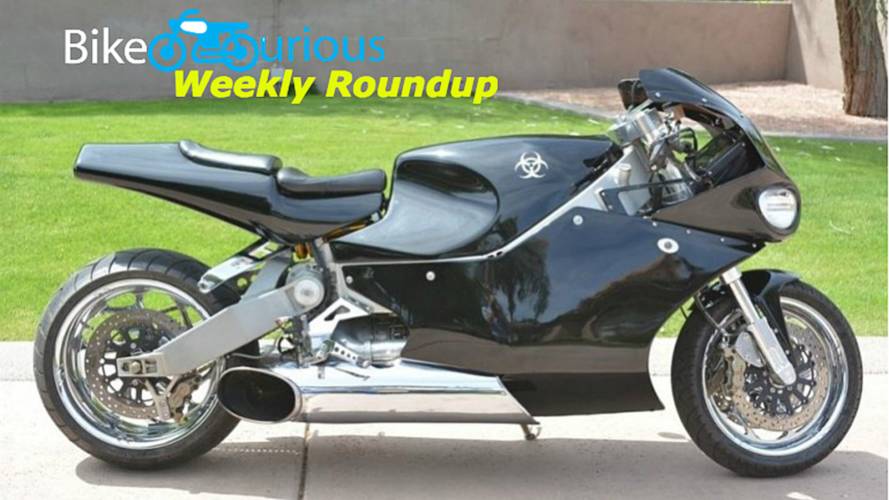 Top 5 Bike-uriosities – Week of 5/15At Bike-urious, we’re spending all of our time finding the most interesting motorcycles that are currently for...

The Suzuki GSX-R 750 Limited Edition is already a legend in the US among 80s sportbike collectors. But here's something even rarer — a home market (JDM) version, which had a different paint scheme. In the US, the Limited Edition cost 1.5 times as much as the base 750 Gixxer thanks to a $2,000 dry clutch upgrade, solo tail cowl, steering damper, metal fuel tank, and a whole bunch more. I've seen production estimates between 500 and 1,000.

The most expensive Japanese sportsbike available at the time, the Suzuki GSXR 750 Limited Edition was a solid 60 pounds lighter than the competition. This example has 5,223 miles and is claimed to be all original with the exception of the Yoshimura exhaust. The seller says this bike is a 9.5/10 cosmetically and that it's perfect mechanically.

Suzuki calls it the Hyperendurancer!

Find this JDM Limited Edition Gixxer for sale in Auburn, Washington with bidding up to $16,200 and the reserve not yet met here on eBay.

The most iconic motorcycle adorned with Laverda's name on the tank, the 750 SFC was a limited production racer for the street. This example was restored four years ago and it's ready for you to enjoy.

The Laverda's 744cc parallel twin produced 75 horsepower at 7,500 rpm — good for about 135 miles per hour. The SFC suffix stood for Super Freni Competizione, or Super Brakes Competition. Each engine had serious modifications from the more pedestrian 750 SF, including bigger valves and bigger 36mm Amal carbs. Each engine was dyno tested to make sure it was putting out at least 70 ponies, and the frames were then strengthened.

Originally built for factory competition, these bikes were hand built by a small number of employees to meet the standards of performance rather than cost. Apparently, the now-iconic orange paint was selected to make the bikes easier to see on the track and to please Jan Raymakers, the Dutch Laverda importer. Check out this article from Motorcycle Classics to learn more about why this bike was such a legend even when it was first released.

This example (VIN: 17164) has 18,169 miles. It was restored in 2012 by the second owner who fitted aftermarket electronic ignition in addition to lots of new OEM parts: Akront rims, IKON rear shocks, exhaust, tires, tail light, pistons and rings, and more.

The current seller is the third owner and he 'overhauled' the carbs and brakes to make the bike more manageable on the road. In addition, he changed the oil sump plate to include one with a drain plug, and then added custom signals and mirrors for safety's sake. He also replaced the original fiberglass tank with an aluminum replica to avoid any issues with ethanol; however, the original tank is included.

Find this SFC for sale in Roswell, Georgia with bidding up to $25,700 here on eBay.

While OSSA is probably best known for their trials bikes, one of their prettiest models was the Dick Mann Replica, a flat tracker designed with Dick Mann featuring a tuned 250cc OSSA engine. At the time, Yankee Motors of Schenectady, New York was importing OSSA's into the US. They built the DMRs, and they used that experience when they built their own motorcycle: the noteworthy Yankee Z500.

Less than 200 of these flat trackers bearing Dick's name were built. According to Mid Atlantic OSSA, estimates peg production at 50 four-speed models and 100+ five-speed models. Features included Telesco 34mm forks, Boss seat, fiberglass tank, alloy rear fender, a quick-change rear hub, and more. The seller says this is chassis #150 and it's a 5-speed model. The plate was supposedly nickel-plated when the bike was assembled, and the engine has zero hours on it after a rebuild.

Goodies include a new Jemco exhaust, Betor suspension, Bates foot pegs, and some new parts. The gas tank is original and it has some scratches. Overall the bike is claimed to be very nice, but not perfect.

Find this DMR for sale in Vestal, New York with bidding up to $3,250 and the reserve not yet met here on eBay.

In the past, I've interviewed a gentleman named Travis Scott, who calls himself "the Nimbus Nut." It looks like he's been able to import yet another Nimbus to the United States, and this time it's one of the rare Sport versions.

I've featured a few Nimbuses (Nimbii?) in the past, and each time I've noted that these bikes were quite technologically advanced for the day. The Nimbus is legendarily reliable — even today some people use them as daily commuters.

For more information, check out this profile from the Nimbus Club USA. It estimates that there are about 200-250 of these bikes in the US. The Sport version was differentiated with an upswept exhaust and different pistons, which allowed for a higher compression (5.7:1) and raised the horsepower from 18 to 22.

This example was given a "complete nuts and bolt restoration", but you'll need to contact Travis directly if you want more details than that. Find this Nimbus Sport for sale here on Craigslist in Guffey, Colorado for $16,000.

When this bike was released, it took the Guinness World Records for most powerful production motorcycle and most expensive production motorcycle. It featured 320 horsepower, 425 pound feet of torque, 227 mile per hour top speed, and one of the greatest startup sounds ever.

Built by MTT (Marine Turbine Technologies), the Y2K had a MSRP of $175,000. It had a two-speed automatic paired with the Rolls Royce Allison C20 engine. Later versions of the Y2K got a power bump to 420 horsepower and 500 pound feet of torque. A couple of eBay listings have suggested that just 17 were built, but I haven't been able to find an independent source to verify this.

This example (VIN: SP25900LA) has 400 miles and is claimed to be the ex-personal bike of Ted McIntrye, president of MTT. It has the newer 420 hp engine and is street legal. Find this Jet Bike for sale in Phoenix, Arizona with a BIN of $114,000 or best offer here on eBay.

Which one is your favorite?