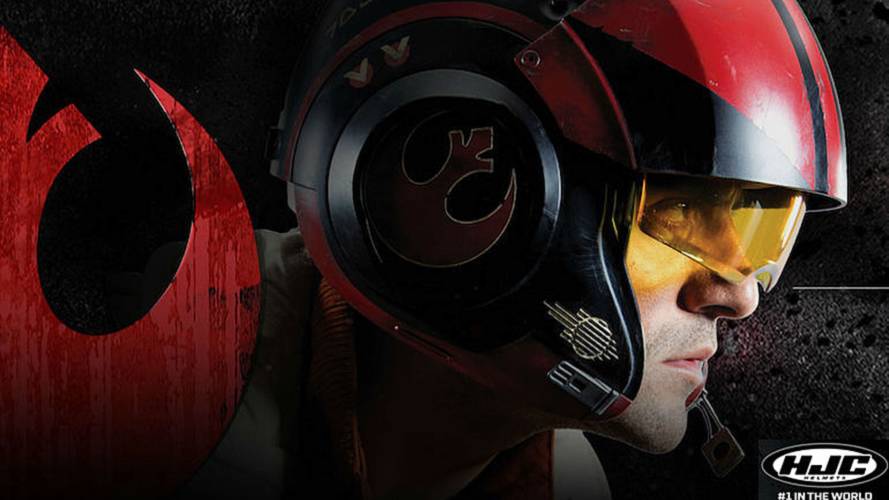 Hey kid, you ever want to be an X-wing pilot? With HJC's new Star Wars-themed helmet you finally have your chance.

Certain characters – or rather their outfits – lend themselves particularly well to motorcycle gear. Poe Dameron’s Resistance Starfighter Corps helmet is very much one of those. HJC's new retro-style open-face helmet is painted up to look like the helmet worn by ace X-wing pilot Poe Dameron in 2015's The Force Awakens.

READ MORE: May the Force be With You - HJC Reveals Luke Skywalker Helmet

Similar in style to the Luke Skywalker helmet that HJC released in the middle of 2017, the Poe replica is based on HJC's affordable and popular IS-5 helmet. It features an advanced polycarbonate composite shell, orange-tinted drop-down sunshield, and HJC's SuperCool moisture wicking interior fabric. The DOT-approved Star Wars lid is adorned in a replica design of Poe’s distressed and battle-worn starfighter helmet, complete with his battle tags and Resistance Starbird symbol.

“This retro-style helmet is unmistakably a Star Wars helmet,” said HJC in the press release for the new helmet.

So who is Poe Dameron? For those not familiar with the new Star Wars canon, Poe is one of the trio of new characters – along with John Boyega's Finn and Daisy Ridley's Rey – set to carry Star Wars into the future. A highly-decorated commander in the new Resistance starfighter corps, Dameron is a little bit Maverick and a little bit James Bond. In addition to his responsibilities as a fighter pilot, he is also one of General Organa's best secret agents, and is often sent on clandestine missions with his partner, an astromech droid named BB-8.

The IS-5 Poe has an MSRP of just $199.99 for DOT-approved sizes XS through XXL. Europe will get the FG-70s Poe in ECE-approved sizes XS through XL with an MSRP of 299,90 €. With Star Wars: The Last Jedi hitting theaters this December and three more movies on the way, we’re likely to see more Star Wars-inspired designs from HJC in the coming years.