Crashing in Style: We Learn to Flat Track 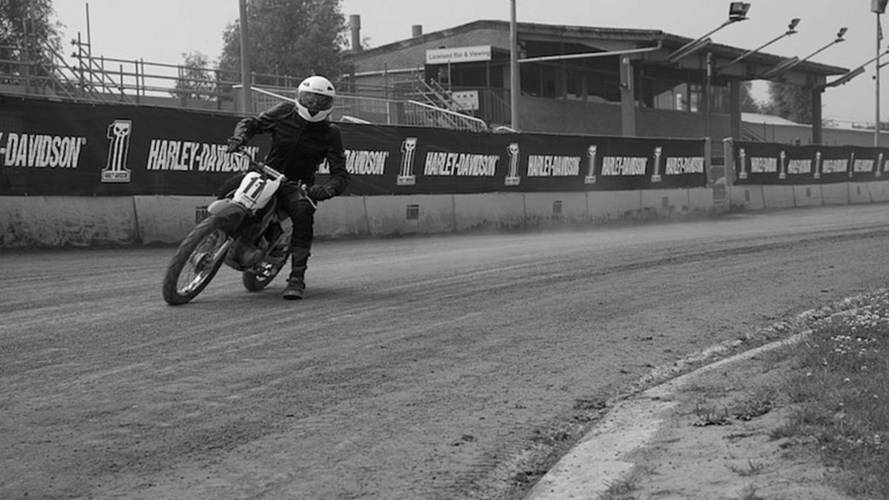 The good folks at Harley-Davidson take us out to the track to learn how to get sideways in the dirt.

Harley-Davidson sends me to school in preparation for Dirt Quake

Racing legend Guy Martin once said if you’re not crashing you’re not trying. By this metric, I am the only one trying today. Nevermind that all the other journalists are lapping me.

It is the hottest day of the year, the temperature having climbed all the way to 34.5º Celsius; that’s 94.1º Fahrenheit for those of you playing along in Trumpistan. This sort of thing is rare in Britain; according to newscasters it’s the hottest June day since 1976. As a Texan, I vehemently refuse to complain – every day I pray to the Sweet Baby Jesus for weather like this – but I will confess these are perhaps not ideal conditions for learning how to flat track.

Roughly a week before this, Harley-Davidson had called me up and asked if I’d like to go to Dirt Quake, the annual “go fast, turn left celebration” of motorcycling and buffoonery that takes place in eastern England. The answer was an easy yes. My answer is almost always yes when it comes to motorcycles, but going to Dirt Quake? Oh hell yes.

“Good,” said Harley’s UK PR man, Trevor, in his matter-of-fact way. “We’ll provide a Street Rod for you to race in the Harley-Davidson Class.”

Wait. What? Race!? They want me to race at Dirt Quake? On a Street Rod?! Have they forgotten my history with that bike? Also, despite my fondness for flat track, I haven’t ever actually done it. As a matter of fact, I haven’t raced anything since my pre-teen BMX days.

“Right,” says Trevor, unfazed. “We’ll have to get you taught. Ever heard of Peter Boast?”

This is the coolest I have ever looked. Note that I am on the kiddie track...

“The former UK and European flat track champion and Isle of Man TT competitor?” I say. “Yeah, I’ve heard of him.”

Fast forward to the hottest June day in 41 years and I’m guzzling water at Rye House Speedway Stadium as “Boastie” runs through the basics of how to get sideways in the dirt.

Left to right: Peter Boast and Glyn Pocklington explain the finer points of flat track to Kane Dalton (BikeSocial) and me.

“Go ‘round the track five times and you’ll probably come close to losing it eight times,” he tells us in his Lincolnshire accent. “You have to be prepared for that.”

I generally have no interest in racing but I’ll make an exception for flat track because it’s just so gosh-darned Southern. Arguably, the sport’s roots are in the American Midwest, and certainly it’s true that it has been sustained by Californian fans for many, many years. But the mentality of going stupid fast on an unreliable surface seems like the sort of thing that would come from my people. There’s an old joke that a Southerner’s last words are: “Hey, watch me do this.”

Flat track is a sport that demands a not inconsiderable amount of stupidity. Yes, there's skill involved; but stupidity is key. And by birth I have the latter commodity in excess.

Moto-journalists assemble: Leon Poultney (Flat-Out Magazine), me, Kane Dalton, and Lara Ferros (Elle) get ready to go out on the track with rider coach Glyn Pocklington.

Boastie has started us out on little Honda CRF100 bikes that all look to have been dropped from a great height. But they all start on first kick and, more importantly, only weigh about 70 kg (155 lbs), which is less than me. As such, I am able to support the weight of the machine on my left leg.

You will have seen the classic flat track stance, of course: rider crouched, elbows up, left leg akimbo, and the bike leaned over in a controlled slide. The purpose of this is to effectively use the left leg as a third wheel, or, more correctly, a skid. The rider wears a steel overshoe on his or her boot to facilitate sliding and to keep the boot from being ripped to shreds. Our very first exercise is to simply sit on the bike, right foot up, and tip it over to the left as far as we can; it’s an exercise that makes me wish I did more squats. Flat trackers never skip leg day.

After this we spend a little time weaving through cones, then going around cones in a tight circle, before being let loose on the kiddie track. At every step of the way, Boastie and fellow rider coach Glyn Pocklington try to get me to loosen my shoulders, to stick my leg out a little further, to keep my right leg tight against the tank, to lean a little more, and so on. As so often happens when I'm learning a new skill, I seem to forget all the basics. On more than one occasion, I receive signals to shift into a higher gear.

I find myself surprised by just how physical this all is. I don’t really notice when riding around the track but when I’m waved over to receive more instruction I am panting as if having just run a sprint. I am also in full little-kid mode. I’m not particularly good at any of this (good lord, do I go wide in the corners), but I am having an insane amount of fun.

Eventually, we graduate to the full-size track. Smaller than the track I’ll run at Dirt Quake, it is still big enough to get up a head of steam in the straights. It is in the straights, after all, where you really do your racing. There’s not much you can do in the corners but hold your form, stay steady, and wait to straighten up. Give it any real throttle while leaned over and the bike will squirrel out from under you, and you’ll end up on your ass. Which is what happens to me on my second time around.

The clay surface of the track is harder than I’d imagined, but I pop up right away, push my bike to the side, get it restarted, then get back into the fray. With little breaks for water and breakfast bars we keep this up for the next hour or two. I never actually improve – or, if I do, I improve at a rate far behind that of my fellow mo-jos – but the whole time I’m frenetic with glee. I feel like I did when I was a kid, swimming at the Clute Municipal Pool: thrashing about in such simple joy that I can’t process full thoughts, apart from the deep hope that no one will tell me to stop.

This photo makes it look like I'm holding my own against Jay Hawley (The Sex Pistons) and Kane Dalton; in fact, they're lapping me.

Eventually the end of the day arrives and two standard-issue Harley-Davidson Street Rods are wheeled out for us to get the feel of. The bikes are so standard-issue that a tech has to disable the ABS. These bikes are, of course, a hell of a lot more powerful and heavy than the wee Hondas we’ve been riding all day. We are warned of this fact again and again before being let loose, but, yeah, you know I'm not paying attention.

Coming out of the first corner I decide to open up. The bike fishtails as the rear wheel spins on hot, dry dirt, and within a second or two I’m already well into the next corner. I brake late and press down too hard, causing the whole show to squirrel around wildly. Somehow or another I manage to stay on and take things a little more sensibly into the next corner.

“I saw you got brave there,” says Boastie afterward. “I suspect you learned your lesson.”

Maybe. Probably not. I guess we'll find out on the day.

Dirt Quake takes place each July in Kings Lynn, England. Along with the very real possibility of seeing me crash a Street Rod for a second time, attendees can look forward to seeing actual good riders like Guy Martin, John McGuiness, and Carl Fogarty get stupid on the dirt. For full details, check out DirtQuake.com

Keen observers will note I'm doing something really wrong here. Points to you if you can spot what it is.