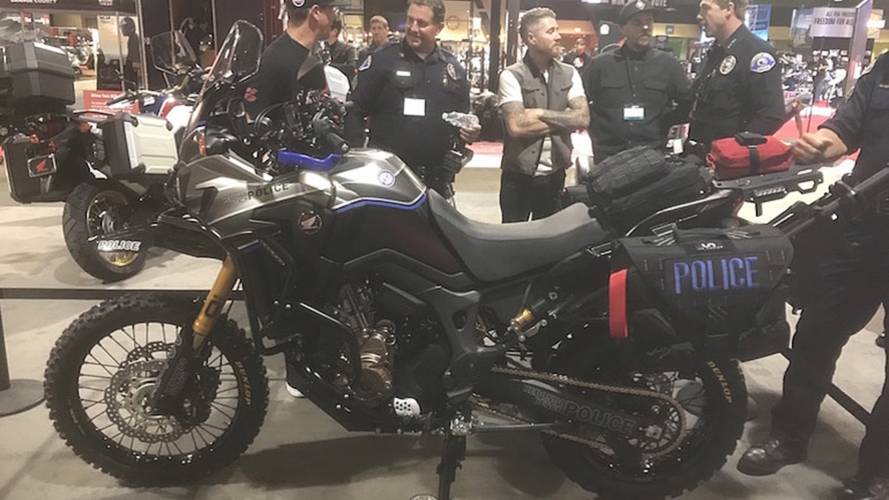 RideApart catches up with Roland Sands at IMS Long Beach to chat with the legendary racer turned wrencher about his latest project with Honda.

RideApart catches up with Roland Sands

Becoming a motorcycle cop may have just gotten more enticing.

A few months back American Honda announced it had donated two new Africa Twin ADV bikes to the Redondo Beach Police Department. The pair of ADV machines were given to support the recently launched City of Redondo Beach Police Foundation - an organization that helps fund new and emerging technologies to enable for better more high-tech policing. American Honda’s press release also briefly mentioned the fact that builder/moto-parts and gear purveyor, Roland Sands, had agreed to help modify a bike for the police department.

To that point, the Honda ST1300 had been the go-to choice for the coastal city's police department. However, its officers have been exploring the possibility of transitioning to a stable consisting of ADV bikes because of lighter weight and agility. The department’s chief, Keith Kauffman got the ball rolling by reaching out to Honda, who already had an established relationship with the RBPD, and borrowing a bikes for his officers to test. Turns out they were fans.

“We are the community, leading the way in law enforcement," Kauffman said. "That's why when we look at partnering, we're going out to the experts. If we want to be one of the most innovative law-enforcement departments in the country, we have to push the needle, and Honda's generous donation of these Africa Twins will help us to take a big step toward that objective."

RideApart was at the Progressive International Motorcycle Show at Long Beach, California, to see the cover pulled off of what is arguably the coolest police motorcycle of all time, and got the chance to chat with Roland Sands about his collaborative effort with the RBPD.

“I’d worked on a couple projects with Honda already so when they hooked up with the Redondo PD they started talking about how they wanted to modify the bikes to get them to where they need them to be and that’s when our name came up,” Sands said. “They came by, we spoke about the project, and I said, 'I’d love to do this.' To me this adventure bike is the gnarliest it can be while still being used on a daily basis for police duties. We really had to get everything right for these guys, there’s no room for excuses if the motorcycle doesn’t work.”

I asked Sands whether he was given guidelines or parameters for this unique build.

“Certainly, but it was a collaborative project, we all sat down and talked about the right direction to go in, whether it was figuring out everything they needed to carry for everyday work, or the more tactical gear, like the ballistic armor and tactical armored blankets – in the event of a live shooter situation. It was crucial for the design to keep these guys protected.”

I was intrigued by the idea of these Hondas having ballistic armor. Sands demonstrated by opening one of the soft luggage bags made by US Armor, producing a collapsible sheet, roughly 60 inches by 18 inches, filled with bullet-proof plates.

"With these you’re really setting yourself up for success. If you pull this out and you have a gun, it’s really hard for someone to f*** with you,” Sands said.

After folding up the bulletproof shield and slipping it back into its case soft case and removed a ballistic tactical blanket, which he draped over the Africa Twin.

"A lot of the time when there’s a crazy situation, motorcycle cops will be the first ones on scene," Sands said. "So, it’s really important for officers to be able to instantly establish cover for themselves. made from 3A armor, which is good for stopping a round from a .44 Magnum."

The suspension on this Honda Africa Twin consists of fully adjustable Ohlins units. In addition to official help from the trick suspension company, RSD and the RBPD got further assistance from Yoshimura (who provided a full exhaust with carbon fiber cap for the bike), Dunlop (who provided the tires), K and N (who donated some intake and filter units), and ALTRider (who ponied up handguards, a large heavy-duty skidplate, z headlight guard, and the extremely durable crash bars. SoundOff Signal donated LED sirens and auxiliary lighting equipment while Axon provided a high-tech HD flex camera.

Though Roland Sands designed and physically assembled this build, Airtrix - a company renowned for its artistic liveries and designs on vehicles, helmets, etc - teamed up with Sands to deliver the bike’s paint scheme, which is made up of multiple shades of grey and silver, accented with white and blue striping/outlining, and finished off with RSD logos on the tank and fender. A small first-aid kit sits behind the seat on a flat luggage rack, and in between the rear fender and leftside bag is a locking mount for an assault riffle or other long gun. The space on the other side is occupied by the Yoshi exhaust. A radar gun fits neatly up front on the right side of the bike. A centerstand was added. Sands also added a printed novelty license plate reading “TKTTIME” to complete the purpose-built Africa Twin.

Arguably, full-size adventure bikes make for better police motorcycles. They possess rough-terrain and off-road performance, provide good visibility for the pilot, are relatively fuel-efficient, and will undoubtedly make for a pleasant lane-splitting experience – routine practice for moto-mounted officers in California.

"We're pleased to provide the Redondo Beach Police Department with these Africa Twin models," said Chuck Boderman, vice president at American Honda’s Motorcycle Division. "Redondo Beach is a neighbor of our home city of Torrance (where Honda America is based), and we support the City of Redondo Beach Police Foundation's work to develop and incorporate technologies not typically used for police duties. We hope that these motorcycles will help the department's officers to carry out the important work they do for our community."

Sands has designed and customized just about every genre of two-wheeler under the sun, but full adventure bikes aren’t a class he's worked with much in the past. Nonetheless, he managed to deliver a competent police motorcycle that boasts everything a moto cop needs to stay safe and perform daily policing duties. While this particular RSD-built Honda was created entirely through donated parts, time, and services, (plus the donated bike itself), this is one project I would be happy to have my tax dollars going to.